Swedish Bread and Butter Kanelbulle Pudding with Bourbon and Bananas 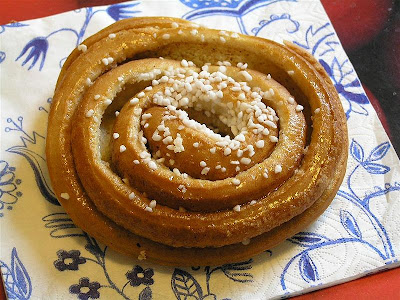 Gothenburgers are known as the jokers in straight laced Sweden. Whenever a cartoon character or film role requires an amusing protagonist, they always cast someone from Gothenburg. It bubbles up a lot at work with very few days passing without an email chain awash with Swedish puns that are so obvious that even I can spot them.

As a sign that I’ve gone slightly native, I’ve found myself creating recipes based on how good the pun would sound, rather than what the end result would taste like: truly a recipe for disaster. Whilst this might create entertaining fodder for a blog post, it doesn’t necessarily translate to deliciousness. I found myself creating a dinner party menu full of ideas that sounded funny but were duty bound to taste awful. Having got a laugh at the idea of Stromanoff (herring stroganoff) I changed tack and used salmon far more successfully instead. And even then I tried to ruin it by calling it “laxanoff”.

Whilst the punning is fun and dangerous, I’ve found it very liberating as it lets you combine ideas and flavours with more energy, such as inventing a Swaesar Salad. Which leads me to one cultural mash up that worked brilliantly. I was fumbling around the supermarket trying to rustle up a fun dessert that married British and Swedish cultures, when I stumbled across the idea of creating a Scandi version of bread and butter pudding. Given that the Swedes have a pudding and baking culture that would make Greg Wallace walk around with a permanent boner, it felt like it could really work.

One of Sweden’s most iconic culinary emblems is the kanelbulle – which is a swirled a cinnamon bun, sprinkled with crystalised sugar that is as prevalent over here as a doughnut would be in the USA. They are part and parcel of any casual “fika” which sees Swedes devour a cheeky little cake with a friend and a coffee. But fika isn’t just coffee and a cake – it’s a cultural institution that Henry James could have waffled on about as a follow up to A Portrait of a Lady.

So with the unlikely pair of Greg Wallace and Henry James in mind I dreamt up the idea of creating a kanelbulle-bread and butter pudding. It works with croissants and marmalade, so why not cinnamon buns?

To make it a bit more grown up and to add offer up another flavour to enhance the cinnamon I decided to supplement it with bourbon, bananas and sultanas. And with this thought process, the world’s first kanelbulle bread and butter pudding was born. Here’s how to make it.

If you’re lucky enough to have a large kanelbulle, cut it into a series of 1 cm thick slices. Otherwise just slice the smaller ones and make do. Layer the slices with the bananas and then sprinkle with sultanas in a baking dish. Douse with bourbon. Add another layer just like the first and arrange the slices so they make a nice pattern. Then unleash the custard and cream. Let the custard and cream seep in and then sprinkle some brown sugar on top. 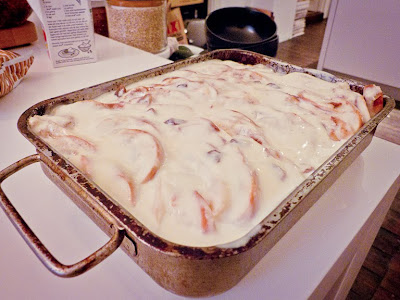 Bake in a medium oven for 30-40 minutes and serve with ice cream. 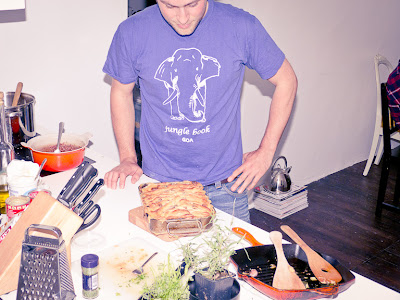 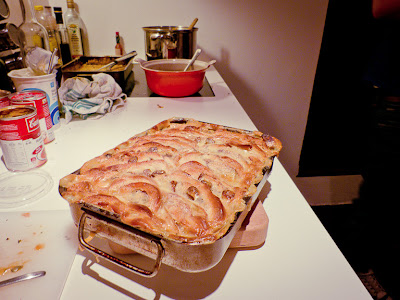 It far exceeded my expectations and I am now looking forward to cooking it again on October 4th - which is National Kanelbulle Day in Sweden.

Thank you Christian for the photographs. And to Bengt Olof Åradsson / Wikipedia for the image at the top.
Posted by Paunchos at 07:15

This looks yummy, don't think I've seen anywhere selling those buns over here in the UK, but I think I might try it using Chelsea buns, they look and sound similar.

Greetings from the USA. If you folks are looking for any Amish or Mennonite recipes feel free to give my blog a look. Richard from the Amish settlement of Lebanon,Pa

That looks so tasty! Definitely worth a try.

what an absolutely genius idea! Love it.

@gastrogeek - Thanks! Glad you like the idea. Was lots of fun to make.

It looks so good and i`m sure it is delicious, so i think i will try your recipe. Thanks a lot for sharing.

No Doubt it's delicious:)