Hendrick's describe themself as the "unusual gin". They are well known for their quirky, slightly mad behavior that some would describe as eccentrically English. This stems from the way they make their gin. Instead of being juniper heavy, their gin is bursting with fresh cucumber and if I'm not mistaken a hint of rose. They have sponsored the brilliantly weird Chap magazine and have curated events such as the Chap Olympics which you can see more about on their G&TV show below.

So their partnership with Bompas and Parr, Jelly Mongers extraordinaire, is probably one of the best brand cross overs since Kate Moss signed up to TopShop.Bompas and Parr are a best known for their work with jelly which has seen them create wobblers that glow in the dark as well as an impressive array of architectural wibblers as well. You can see some of their masterpieces below: 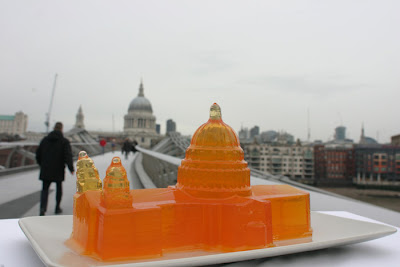 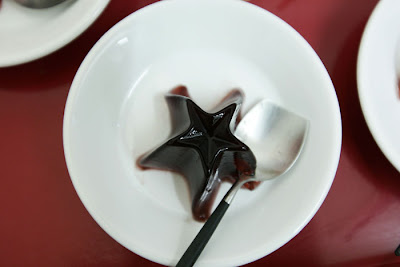 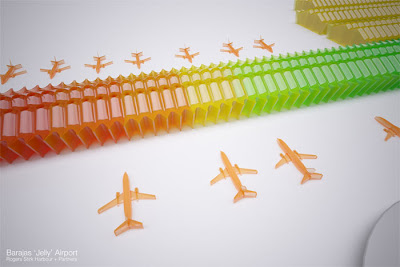 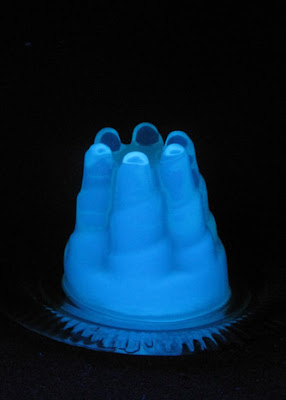 Glow in the Dark Jelly

They have also curated surreal and surprising events such as a scratch and sniff cinema performance of Peter Greenaway's The Cook the Thief His Wife & Her Lover. 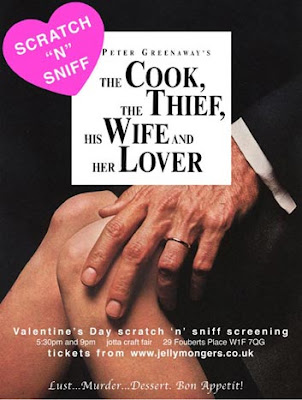 And I am really upset to have missed their flavour tripping event last year, where, "Participants investigated the curious effects of miracle fruit (Synsepalum Dulcificum) which makes lemons taste like toffee and vinegar like sherry." 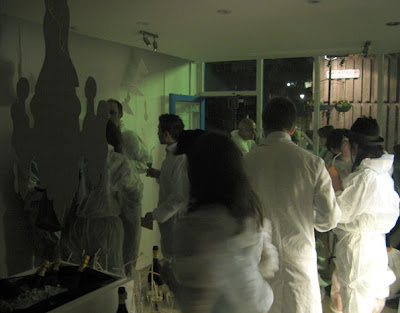 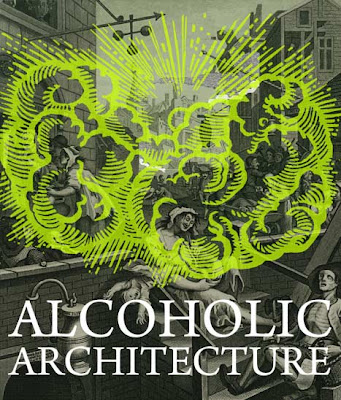 So when I was invited to the launch of "Alcoholic Architecture", the UK's first walk in cocktail experience, I felt like Charlie finding a golden ticket. We arrived to find a gaggle of giddy onlookers standing outside, curiously wondering what was going on. Being British, we formed an orderly queue and pondered what lay ahead. The St. John's ambulance guy who had been drafted in lent himself to a brilliant contextual photograph. I love the fact that the saucy manequin is staring at him whilst he's on the phone. Once inside we donned white boiler suits and joked about how similar we all looked to Dexter.To say the setting was a bit weird would be an understatement. The space, music, lighting and close confines are designed to disorientate and create a sensorially integrated experience that bamboozles the brain and manipulates the mind. ... whereupon things start to go from weird to bonkers... Around 20 of us mingled in the mist, like shadows on the set of Hamlet. It was similar to the experience I had a while ago in the Hayward Gallery when I got lost inside Anthony Gormley's Blind Light installation. The word on everyone's lips was "weird" and the taste was of sweet lime with a bite of gin. The fog was pumped out by a very aptly named bit of kit called the "Mistifier" which seemed to be powered by a Hozelock weedkiller canister! It chugged its little heart out all night, putting smiles on faces and sticky, greasiness in their hair. The mood in the gas chamber was buoyant. Spritely. Fizzing with mirth. All fueled by the imagination and sense of fun that Hendrick's and Bompass and Parr are rightly known for. We certainly left the event with woozy heads. But whether that was down to the booze in the mist, the two double gin and tonics, the surreal setting or option D, "all of the above", I'm not sure. I must admit I was coping fine until the drink that I thought was a gin and tonic tasted of ginger beer. I took a few more sips and questioned the barman who insisted it was gin and tonic. Until I pointed out that his Fever Tree tonic bottles were actually Fever Tree ginger beer bottles. Whoops! This only made the whole thing even more perplexing and unusual. But I wonder how many other guests were oblivious.

This has to be one of the most unusual events of the year so far. I just can't wait to see what crazy ideas they both come up with next. You can find out more on the JellyMongers website. I have a funny feeling that tickets have sold out unfortunately.

Also check out the review in the Times, including a video that I am definitely not in and also pay Tiki Chris's review for the Londonist a visit as well.
Posted by Browners at 19:11

Wow, what a very strange evening that must have been! How itoxicated did you feel? Did you smell of gin when you came out?

Felt a bit tipsy by the end. But that could have been the two large gin and tonics in liquid format! And the mind altering environment!

Interesting but unusual it certainly was. Huge fun. I want to do the same event but with champagne.

This sounds amazing Browners what an experience. I love that Bompas and Parr have almost single handedly made jelly cool again.

They are legends. Both of them legends. I just can't wait to see what bonkers things they come up with next.

Sounds like a fun and interesting experience, although I don't think I could have drunk that much. But you must stop all this 'Britishness' and just push your way in through the door next time. :-)

Looks like a surreal and sublime event but breathing in anything that isn't air weirds me out. But enough of my neuroses...

@A girl has to eat - I'm funny with queues. If I see one I almost have to join it. Makes me late for a lot of things! But you often meet interesting people in the queue and get a sense of excitement.

@Alex - it is weird. And I am guessing a lot of people would find this a bit too much as it is very disorientating! But I guess it's hard to tell before trying it. Your paprika and chorizo haddock with potatoes sounds good. And I'm sorry you lost your shoe!

Looks like good fun, If you don'y mind me asking, how do you go about getting invites to something like that?

Hendrick's describe themselves as the "unusual gin". The concept is quite simple - you can stroll around the room inhaling alcoholic vapours. But breathable gin and tonic makes your nose run… ;)

Gin with bursting with cucumber and a hint of roses. This should be interesting! Oh, those jelly things look delicious :D

It is very interesting and fun !!! yeiii... pictures speak for themselves