Now ThaT's What I Call a Burger Joint - But what's it doing in Watford?

I’ve got a soft spot for Watford having lived there for a year whilst studying for my advertising course in spite of its grey complexion and distinct odour of dilapidation. We whiled away entire afternoons in Riley’s potting one in every twelve attempts during the day and I struggled to sleep at night because my bedroom overlooked the ambulance depot that services the M1 and M25. The ambulances would very graciously not use their sirens but they didn’t think twice about blasting their flashing blue lights through my moth eaten curtains. And the fact that each and every one scraped its undercarriage on the sleeping policeman directly outside my flat just made things even better.

So with these tainted memories it took the promise of a fantastic burger joint to drag me back and temporarily reprieve me from the Nordic Diet. ThaT Burger is fairly shamelessly stolen from Five Guys who have a reputation for serving some of the best burgers across the pond. A few years ago they rose to international fame by serving Barack Obama and haven’t looked back since. ThaT Burger has reformulated this model and brought it kicking and screaming to Watford.

Their burgers are of the thin and fried variety and can be stacked as high as you want, with the record currently standing at a heart stopping 14. You can customize your burger with a range of awesome toppings including proper bacon, sautéed mushrooms, onions, four types of cheese and any number of additional patties. You can even add a chicken breast if you are feeling particularly de trop. The soft brioche-y bun, scattered with a handful of sesame seeds effortlessly absorbs the copious amount of grease and remarkably has far better structural integrity than you’d imagine. They also excel at onion rings and have a range of dips that would make Right Said Fred very proud. 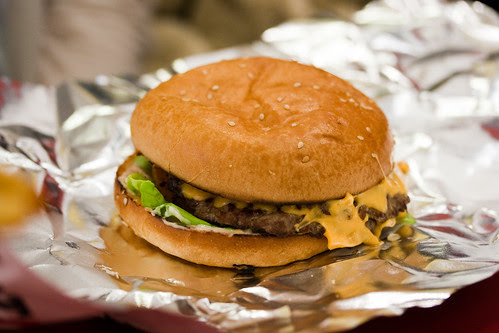 The classic cheeseburger with a slice of American “cheese” thrived in its mirrored wrapper. At £3.90 for a single meal deal it really isn’t bad value. Especially when you consider the quality of the salad, the hand made-skin-on-fries, the quality bun and that it is cooked fresh to order. Each additional patty will set you back an extra 70p whilst cheese costs between 20-35p a slice and more luxurious toppings such as mushrooms, bacon, jalapenos and guacamole will relieve you of 60-80p per item. Our only minor gripe is that the burger itself could have been tastier, but that comes with the territory of frying rather flame grilling. 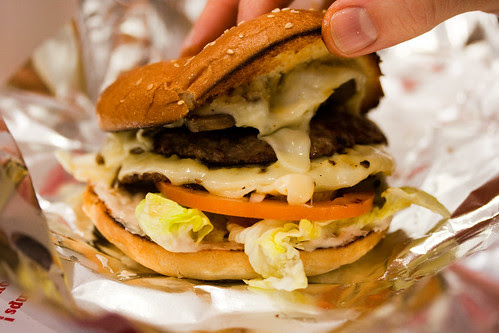 We pushed things a bit further with a Double ThaT Burger with Swiss cheese. Whilst the single cheeseburger was tasty and relatively restrained this chap was about as understated as Moose Malloy. They don’t hang about with the toppings here and you wonder whether Switzerland is now suffering from cheese rationing as a result. If you are being picky the down side is that the flavour of the beef isn’t given a chance to shine through. 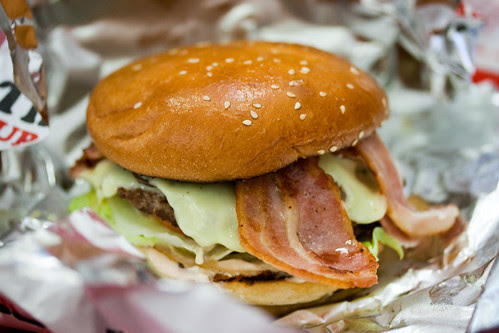 The highlight was a Double ThaT Burger with Swiss cheese, sautéed mushrooms and thick slices of bacon. Whilst it probably needn’t have been a double, you’ll struggle to spend less than the £6.20 this cost on a better burger, fries and drink. I had to restrain myself from using my straw to guzzle the meaty juices that settled in the foiled paper. 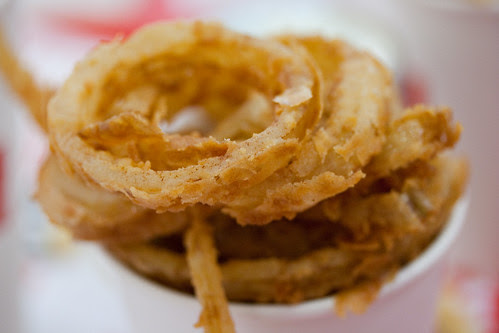 The fun didn’t stop with the burgers. The quality of the lightly battered onion rings (£1.50 regular or £1.95 for large) had us wondering whether they had imported a Japanese tempura master especially for the job. Dunked into a chilli-cheese dip they were a meal in themselves. I can't think when I have had better. 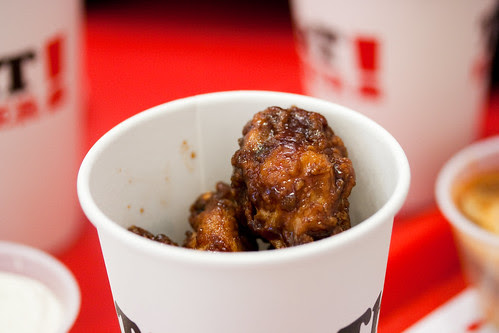 BBQ Buffalo wings (£2.75 for 6) were fine, but lacked any wow factor apart from the novelty of serving them in a paper cup. Maybe the peri-peri would have been more of a thrill. 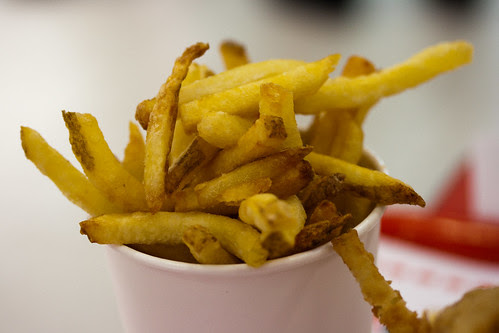 Their fries (£1.25 for regular or £1.75 for large) are hand cut on site and are some of the best you’ll find in a high street fast food joint and the skins give them the charming illusion of being healthy! But given that we were dipping them in garlic mayo, the self deception wasn’t quite powerful enough. If you were worried that you hadn’t had enough calories, they also serve a small range of deadly milkshakes that are either strewn with Madagascan vanilla or chunks of chocolate.

Aside from the surprisingly good food and shakes (with half a mark taken off for fried burgers), they’re also pretty smart with their marketing. They’ve taken to social media like a burger to cheese and bacon. Glowing Facebook comments adorn the walls in smart black frames and a large flat screen with a live feed from their Facebook page keeps you up to date with whatever is being said about them online. You can sit at your table and leave a comment and seconds later it is up in lights both in the restaurant and shared online. They are also very good at listening to their customers and responding to advice – for example they asked their Facebook fans whether they preferred their fries with skins on or off with the result that skin on fries now grace the menu.

The main problem with ThaT Burger, apart from the erratically capitalized T, is that they have decided to open their first burger joint in Watford. Sadly the local population just walk on by to the extent that the owner jokingly commented that he can get people to come from London for a burger but not from Watford itself! And whilst the food is great and the social media marketing is cute the atmosphere inside the restaurant is somewhat sterile. It used to be a Pizza Hut and they haven't really succeeded in stamping their identity on it, which can be the danger of being a bit of a blank slate where you let consumers make the decisions for you. A little glance over at the way that Byron have established their identity and then engaged their fans only confirms this.

They’ve recently announced that they are looking to open another franchise, so if you want to give it a crack and put your stamp on ThaT Burger get in touch with Justin at burgers@thatburger.co.uk. Current suggestions are for them to open in Rickmansworth, but surely somewhere like Balham, Farringdon or Gothenburg would be better? But in the meantime, give it a try especially if you live in Watford.