The Night Riviera to Cornwall 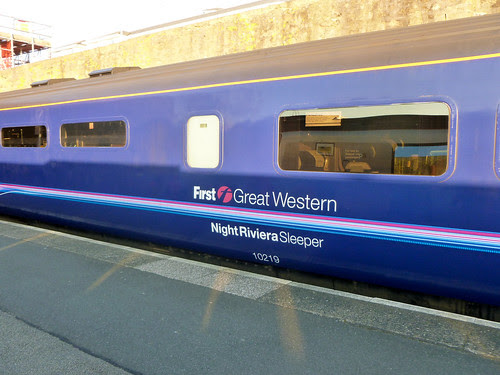 As the Night Riviera pulled out of Paddington our weekend began with a hiss of kissing steel and a clunk of clacking couplings. Our berths were like Japanese boutique hotel rooms – except on a train. They would have been futuristic once – but there’s something even more charming about the way they hark back to another era of long distance train travel. To a life more civilised.

Our suite had two bunks, a sink, a dinky ladder, air conditioning and wonderfully static sheets that flickered and glowed when you shuffled around in the dark like the Northern Lights. After some free tea and shortbread in the dining cart we turned in for the night and awoke to a bacon sandwich and a cup of tea at Truro at 6.45am.

We had left the gloom and bustle of London behind us and alighted at piratey Penzance, squinting, as we were stunned by the azure brilliance of the iridescent Atlantic. Our 4 mile cycle to Mousehole, through the fishing port of Newlyn followed the coast and filled our lungs with sushi fresh air and our ears with the rhythmic cacophony of seagulls and trawlers. We felt a million miles from Paddington and felt like bottling the air and sounds in one of his marmalade jars. 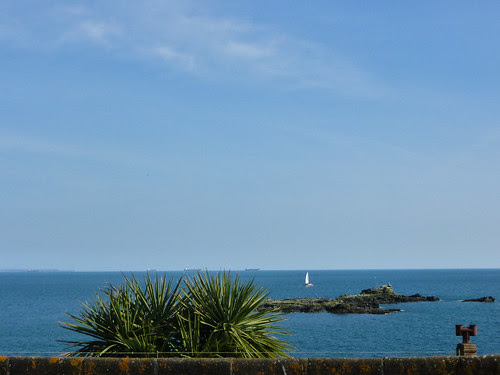 By 8.15 we had been welcomed into the Old Coastguard as if they had just realised we were The Ancient Mariner and ushered our alarmingly Lycra clad bodies into the breakfast room where we feasted on locally smoked kippers, home made yoghurt and Cornish tea. I am sure being able to see the sea makes a kipper taste even better. 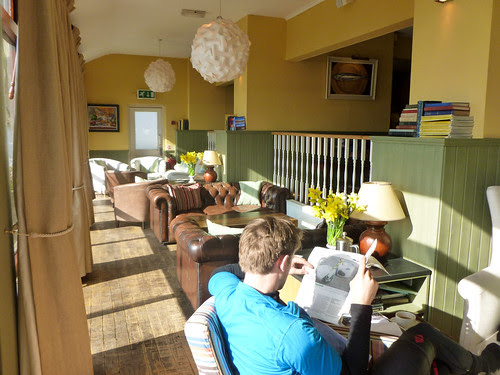 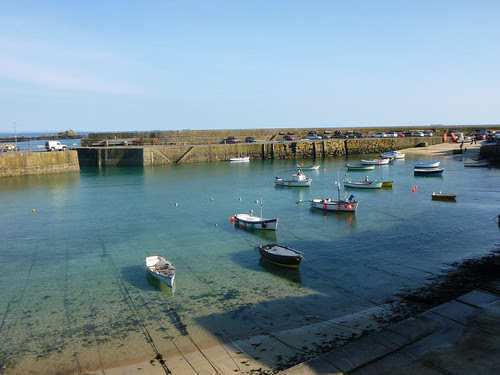 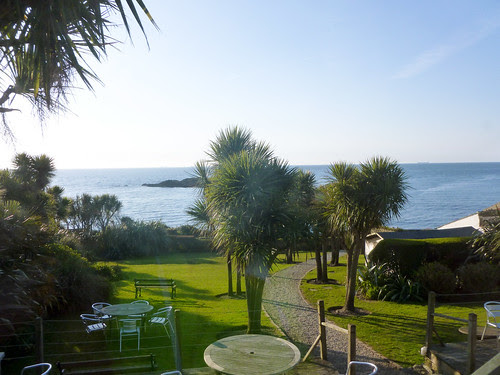 With the sun beaming down we set out on a 60 mile cycling loop that tracked west through Lamorna to Lands End before heading onto St. Just and then through the majestic moorlands either side of Zennor. It was like cycling through a Rapha photoshoot – except with more sweat and a much less successful posing. We watched as seagulls remorselessly followed a tractor as it ploughed a field that dropped off into the Atlantic. We waited as a cocky cockerel stopped the traffic as he ambled across the “main” road. We nodded at fellow cyclist. And they nodded back.

We paused at the Gurnard’s Head for a gawp at their lunch menu – and I am still torn between the roast turbot with truffles and the blade of beef with wild mushrooms. But it would have been a bit indulgent considering I’d just had a big breakfast, and that it was only 11am!

At St. Ives we stopped for a pasty and a cup of tea before escaping the tourists and heading through the delightful backroads around St. Erth where we climbed over the central hills where we were confronted by St. Michael’s Mount erupting out of the shimmering bay.  We continued along the coast and back to Mousehole and felt any sense of stress from London flutter away. It’s a spectacular coastline and a privilege to be able to cycling along it. 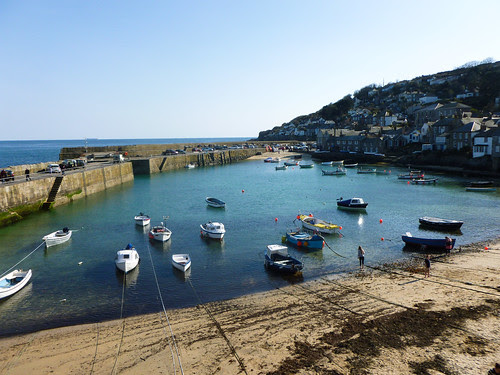 Dinner at the Old Coastguard was just as good as we’d hoped. Given that it is the latest addition to the East Sleep Drink family whose siblings are the Gurnard’s Head and Felin Fach Griffin – we had high hopes. You won’t find many better views than here to accompany a pre-dinner drink and a game of Scrabble. I’m gushing – but it really was magical.

Cowie’s pork belly starter was sticky, soft and unctuously coated with an oriental marinade. And my crab rarebit was gutsy and craby without being prissy. These weren’t mind-blowingly-original dishes, but they were refreshingly un-twee and intelligently crafted. And given how far we were from London they felt spot on.

For fear of food envy we, unusually, both chose their fish stew. It came laced with (possibly Cornish) saffron and a tangy aioli and swimming with ling, cod, squid and mussels – all bound together in a richly seasoned tomato bisque and spiked with fennel. We sent our bowls back so clean that they could probably have been able to bypass the washing up machine.

Cowie’s cheesecake was good without being thrilling – with the indecently juicy figs stealing the show. But my pistachio and yoghurt cake wouldn’t have been out of place at Moro. It’s the kind of pudding that makes you wish you had hollow legs.

We eventually carried our weary limbs to bed for a sleep that seemed to last forever – before returning for a repeat of the previous day’s breakfast – but with less Lyrca! My full Cornish was wonderfully well judged with the star being a nugget of Hog’s Pudding that left you in no doubt that the pig had enjoyed a good life.

We took the cycling a bit easier on the second day with a 40 mile loop – and instead took in the delights of the Logan’s Rock Inn which is famous for its crab sandwiches and also marveled at the waves crashing against Cape Cornwall. If the sun had been out we’d have visited the Menack Theatre, Porthcorno and Senna Cove – but unfortunately we were battling against near gale force winds. Even in these conditions the cycle was spectacular.

We retuned to The Old Coastguard for Cornish scones and lashings of tea as we slumbered on the world’s most comfortable sofa. Eventually it was time to go and we reluctantly bade farewell and paid our very modest bill. They’d looked after us superbly and I can’t recommend The Old Coastguard highly enough. My only suggestion for improvement would be to have a cycle rack. In fact, it could easily become a base for people cycling around Cornwall. All they’d need to do would be to provide some waterproof maps, some suggested routes (with stop offs at the Gurnard’s Head) and maybe team up with a local bike mechanic to offer some basic tools and services.

We meandered back to Penzance to board our sleeper with some provisions from Co-op – to help make the first part of the journey pass by quicker. After a ½ bottle of train wine we were feeling suitably snoozy to sleep through anything that the train tracks could throw at us. We turned into our bunks and awoke in Paddington station at 6.15am with a bacon sandwich and a cup of tea and were allowed to doze on the train until 7am. Given that the train arrived at 5am there’s something quite surreal about being asleep on a stationary train in a major station.

It is without question my favourite weekend break that we’ve been on. The fact that you get three nights away and two full days in Cornwall makes it fell like a holiday rather than just a weekend. And the experience of the sleeper service is so civilised you’ll feel like you were in a Bond film. Add the relaxed and civilised delights of The Old Coastguard into the mix and some epic weather and it gets even better. We’re now sleeper train nerds and are looking forward to an adventure to the Lakes or maybe even all the way up to the nether regions of Scotland.
Posted by Paunchos at 15:04 1 comment: