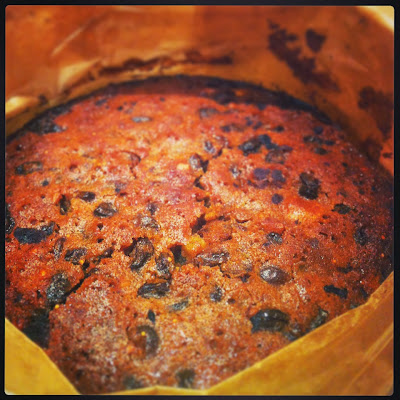 The good people of Waitrose sent me a wonderful box last year full of the ingredients needed to make a Christmas cake. Normal life has got the better of me until now and prevented me from finding time to write about it. But now, I find myself next to a belching chap from Chicago with time on my hands.

My father in law got rather excited last Autumn and decide he would turn the otherwise sedate making of a Christmas cake into a competition. He turned to Delia for inspiration as I reached for my little box of magic from Waitrose. 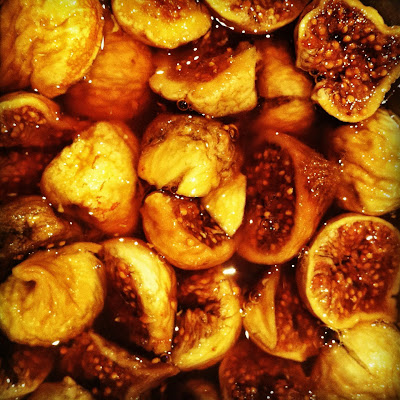 I decided to jazz my Christmas cake up by adding dried figs soaked in Stone’s Ginger Wine for an extra kick of spiced booze. It’s a little supplement that worked well and gave the cake extra longevity. That said, it did mean that on Christmas day it was still a bit juicy!

So with Christmas only 7 weeks away, it’s probably time to get soaking, stirring and baking. Don’t be afraid to add a few extra goodies. It’s a good way of using up mystery brown spirits and fortified wines.

Thank you to Waitrose. And sorry it’s taken a year to write about it. I figured a Christmas cake story between January and September would have been a bit weird.

Needless to say, thank you Waitrose. It's not quite time to say Merry Christmas yet, but it has certainly got me in the mood for some festive baking.
Posted by Paunchos at 18:06 No comments: 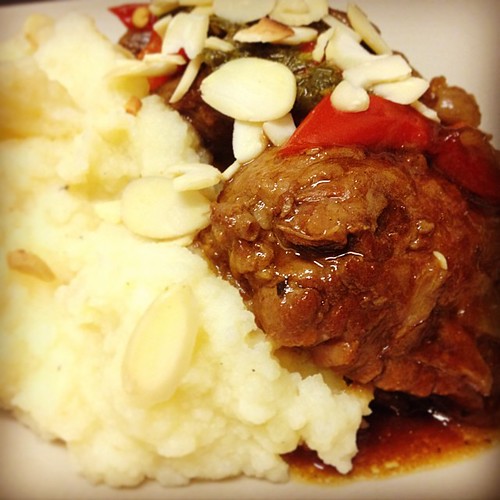 Pork and sherry is a fine combination. Especially when the sherry is sweet and the pork falls apart like a sous vide ponzi scheme. The sweetness of the pork is exaggerated and at once tempered by the oleaginous lusciousness of the sherry. And even more so as it reduces with onions and a touch of paprika. It would be lazy to say it tastes of Spain. But maybe Spain tastes of it. It becomes syrupy and, whilst sweet, also savoury and deep. A bit like a grandfather telling a long story full of unnecessary details and the occasional sentimental Catherine wheel of warmth.

So when Cowie and I were planning our main course for our pop up we found that pigs cheeks cooked in sherry was at the top of our list. It needed to be something that could be cooked in advance and reheated. Something where the prep was done way in advance and the flavours could mature. Something luxurious and generous, but not flashy.

In order to feed 60 we ordered 200 pigs’ cheeks from Kimber’s near Wincaton. Their first class farm shop is responsible for us acquiring a chest freezer for our house in London. Whenever we go down to Somerset we always seem to come away with unusual cuts of fabulous meat. We can’t recommend them enough and pretty much live off their pork rissoles have a serious soft spot for their goose skirt and Jacob’s Ladder.

We decided to slow cook the pigs’ cheeks in a mixture of medium dry sherry and Pedro Ximinex sherry along with a large quantity of caremelised onions which had been given a warm bath in sherry as well. Aside from some seasoning and a touch of paprika and garlic all they needed was a good searing and then a long burble in the sherry.

Served on their own, they would be in danger of being a bit too deep, so a gremolata made with lemon zest, lemon juice, olive oil and parsley brings them to life. And some toasted almonds bring out the nutty notes of the pork and savory nature of the sherry. They also add a nice bit of crunch.

The secret is to strain off the sherry liquor once the cheeks are cooked and to reduce it to a sticky sauce, brightened up with sherry vinegar as you see fit. Taste it regularly as you reduce it so you balance the acidity and the sweetness. It really is a killer sauce and if you have too much you can use it as a fabulous sauce with game. We had it with some grouse recently and loved it. Likewise it would grace a bavette or a haunch of venison. Guard it. And admire the way it sets to a wobbly dark brown jelly. It’s not looker.

Celeriac mash and some greens is all you need to go with this. Enjoy it. It’s our favourite dish.

Season the flour and dust the cheeks.

Sear the cheeks in a hot pan with a good slug of olive oil. Do this in batches. And if they catch loosen them with some of the medium dry sherry. Add this to the slow cooker.

Then fry the onions slowly until they caramelise. At this point add the garlic and smoked paprika. Add PX sherry towards the end of the frying. Add this to the slow cooker.

Pour over as much sherry as is needed to cover the pigs cheeks. Add 2 bay leaves. Grind in some pepper.

Leave to slow cook for 3 to 4 hours – or until the cheeks are cooked. You want them to retain their shape and not go mushy.

At this stage, make some celeriac and potato mash, steam some courgettes or greens.

Also, make a gremolata. Zest 2 lemons. Finely chop 100g parsley. Squeeze two lemons into a bowl with the first two ingredients. Add salt. Add pepper. Glug in some olive oil. Stir. Taste. You want it to taste as sharp and clean as a Japanese knife. It should have almost metallic cleanliness to it that sets off the dark, unctuousness of the pork and sherry.

When the cheeks are cooked strain off the liquor. Add it to a large saucepan and reduce aggressively. Stir. And taste frequently. Add a good splash of sherry vinegar to add some acidity and life to the sauce. This stops it getting too heavy.

You will need to reduce for some time. The stickier the sauce is the better. When it is nice and syrupy take it off the heat and put it in a jug.

Serve with the mash, and veg with 3 cheeks covered in sherry sauce. Then slurp over a spoonful of vibrant gremolata and scatter over some toasted almonds. 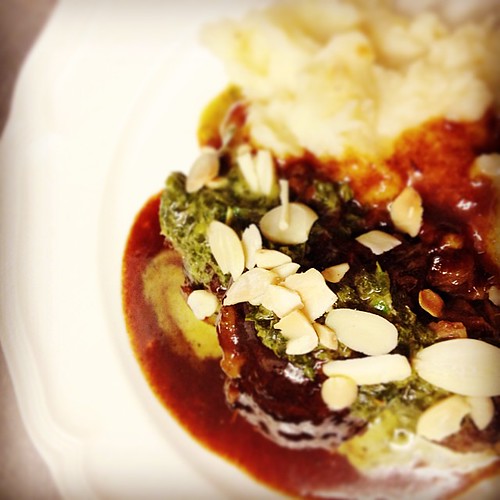 Posted by Paunchos at 16:48 No comments: