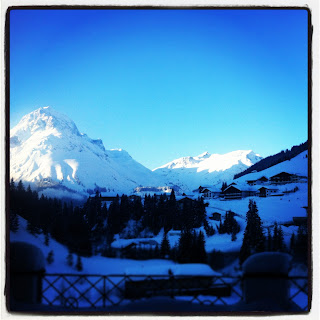 I waited until the final day of our Austrian skiing holiday last February to ask Cowie’s dad if he had any objections to me marrying his younger daughter! It was minus twenty three degrees centigrade and we were sharing a rickety old chair lift somewhere about St. Anton. As the lift reached the top of the mountain I plucked up courage and fortunately David said yes – followed by a comment that will stay with me forever: “As Prince Philip once said – you’ve been practicing long enough”.

Having agreed to keep it a secret until I asked Sarah the following week – we shot off down the mountain in search of our final lunch of the holiday. Feeling giddy and a bit extravagant we finished our meal of spaetzles and schnitzels with an enormous serving of Kaiserschmarrn. It’s a classic Austrian pudding made of fluffy chopped pancakes studded with raisins that is often served with a plum compote. Apparently it was invented for Emperor Franz Joseph and his very hard to please wife who wanted a nice light dessert. It translates as Emperor’s Nonsense which all seems quite appropriate.

With Pancake Day almost upon us and almost a year gone by from when I proposed to Sarah, I thought sharing this Kaiserschmarrn recipe would be rather appropriate. If you felt like taking the nonsense to a new level you could use blackberry or quince jam instead and maybe even add some different nuts.

Adapted from a BBC recipe

Butter two ovenproof dishes and then dust with sugar. Cream the egg yolks and 25g sugar with a whisk until smooth. Then beat in the crème fraîche and rum, followed by the flour. Add the rum soaked raisins.

Whisk the egg whites along with the cream of tartare and remaining sugar until you’ve got stiff peaks.

Then fold the egg whites into the batter and pour into the two pans. Bake for 20 minutes – or until lightly browned and set. Remove from the oven and chop. 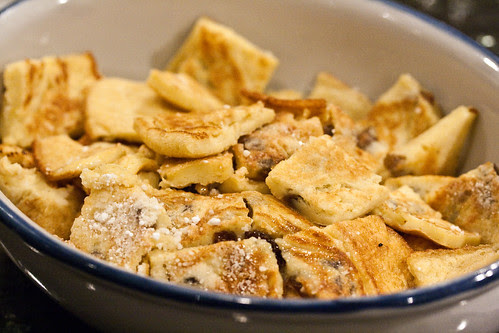 Then dust with icing sugar and serve with plum compote and whipped cream. 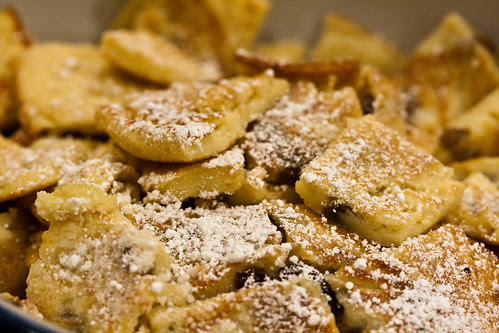 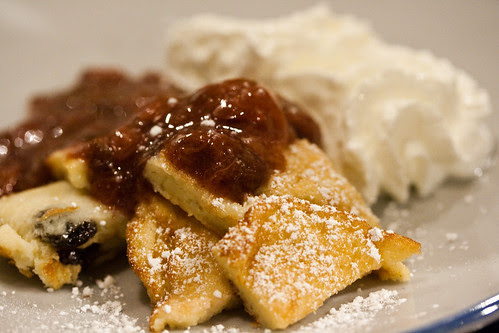 If you've got any suggestions for recipes for pancake day please let me know. We're more determined than ever to win our annual competition this time round.
Posted by Paunchos at 14:52 7 comments: