Photo from Slayer Photo via Creative Commons on Flickr

Living abroad makes you truly appreciate what you most value about your home culture. When I was living in Sweden I missed the comfort of eating pies and slow cooked meat dishes in cosy countryside pubs. I hankered after scotch eggs with gooey middles. I craved the ritual of reading the Observer with a pot of coffee. I gasped for a proper cup of PG Tips despite the tea in Sweden being really good. I occasionally had a Baked Beans Moment and even found myself celebrating my birthday with baked beans on toast at work for breakfast. And I also missed marmalade. Big time.

Although the word ‘marmalade’ pops up in lots of cultures, I’ve had far too many conversations with people overseas about marmalade which reveals that the stuff we know and love is dramatically different from what they think is marmalade. People seem to think it can contain any old oranges, rather than Seville. They are surprised when it has bits in it. Some even question whether non citrus fruit qualify. The truth is that what we call ‘marmalade’ in the Britain is peculiar to our culture and ‘marmalade’ in other countries has a looser frame of reference.

I can imagine an argument between Frege and Wittgenstein about what the word ‘marmalade’ refers to and some sort of baffling conclusion about the sticky problems of philosophy being caused by the incapacity of our bitty language to cope with such simple things as what we all mean by marmalade.

Putting this ridiculous issue to one side, Cowie and I decided to make three batches of marmalade. One classic fine marmalade. One batch with ginger and honey. And the last one with cardamom and honey, inspired by feedetgastro.

We used the same base recipe from Waitrose Magazine which called for overnight steeping, fine cut peel and a pair of Cowie’s stockings. OK. I made that last bit up.

We giggled to ourselves as Cowie filled her stockings with orange segments and invented our own jam company called “Blue Stockings Preserves” which impishly injects a bit of sex appeal into such a WI orientated world.

We’re planning to launch “Seedy Strawberry”, “Raunchy Raspberry”, “Burlesque Blueberry” and “Fondlesome Fig” jams as well. The lids of the jars will be covered in blue stockings and tied down with an Agent Provacateur-esque ribbon. And the labels will be illustrated with beautifully smutty imagery that would probably be banned in Sainsbury’s and loved by Rihana. Imagine Innocent’s brand world, but corrupted by Lady Gaga into making fetishistic jam.

Remove the peel from the oranges and cut the remaining fruit into segments. Cover the fruit pieces in 1.5 litres of water and leave to soak overnight. 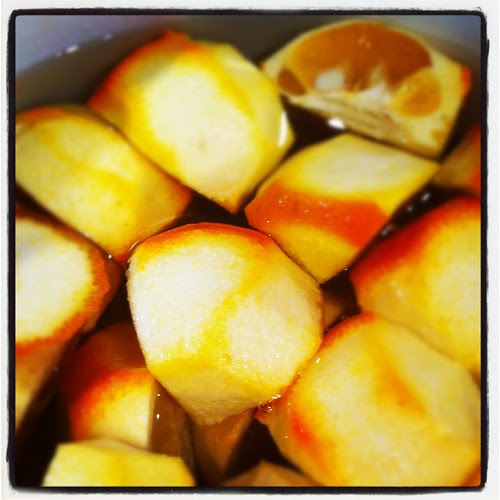 Cut away any white pith from the peel and slice the zest into fine slithers. Add the excess white to the segments and cover the shredded zest in a further 1.5 litres of water. 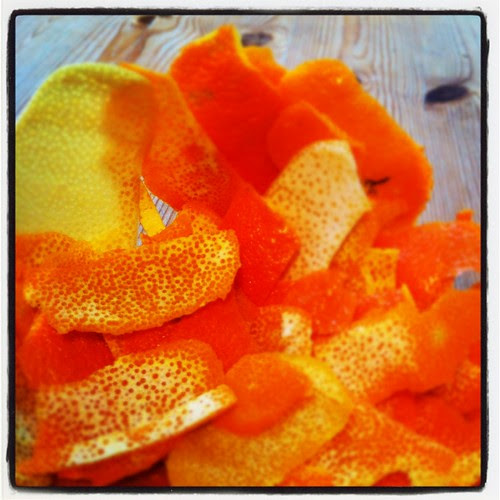 The next day pour the zesty water into a large pan along with the water from the fruit segments and heat to a simmer. Feed the fruit segments into a stocking (not fishnet) and tie it at the top to stop the fruit escaping. Submerge in the pan and simmer for 2 hours.

During this time, heat your jars and lids through in the oven to sterilise them.

After 2 hours remove the stocking from the marmalade allow to cool. Once it is cool enough to handle squeeze out what juice you can and add it to the pan.

Pour the sugar into the pan and heat to a rolling boil. Allow to boil for 30-40 minutes until the liquid has taken on a golden glow. At this point do the saucer in the freezer test and prepare for bottling.

Pour the smoldering liquid into a measuring jug and decant into the super hot jars. Then leave to cool and once set seal with their lids.

Cut up an old shirt and secure to the lid with a rubber band. Or better still some blue stockings and a makeshift garter! 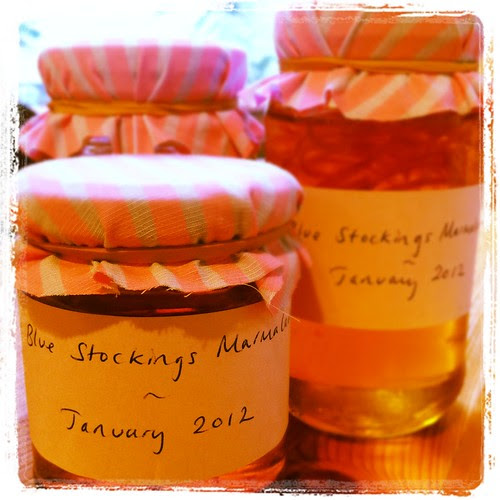 As per the above classic recipe, but exchange 200g of sugar for 200g of honey. And add a jar of preserved ginger to the pan when you add the sugar.

As per the classic recipe but add a dozen crushed cardamom pods to the orange segments when they go inside the stocking. And exchange 200g of sugar for honey.

The honey has proved to be a great success. It seems to have helped give the marmalade a really gooey set which has a comforting oozing sensation on the tongue. And of all three the ginger and honey edition seems to be going down the quickest. The fine shred is quite a different experience from course cut marmalade - with a much lighter but still intense flavour. There's a time and a place for both, but for now Blue Stockings Preserves cutting it fine.

P.S. Sorry for the iPhone photos. Superheated syrup and nice cameras don't seem to like each other very much!
Posted by Paunchos at 09:07 5 comments: