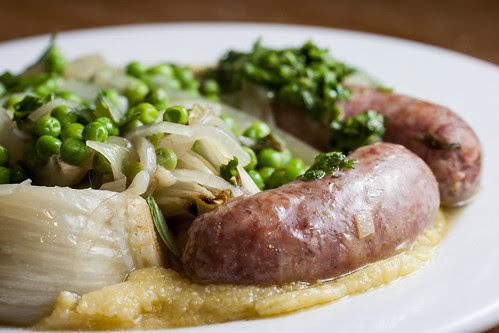 Walking into the Italian deli near my office in King’s Cross is to be transported to the scene in Goodfellas where they are cooking in prison. The store is run by an Italian version of the most charming version of Arkwright from Open All Hours, who has never failed to be a gracious an inspiring host. He will make you enormous sandwiches cut from whole loaves of ciabatta laced with freshly sliced cured meats and cheeses, moistened with a healthy slick of olive oil; or more conventionally he’ll send you packing with genuinely Italian ingredients and delicacies that will stink your office out for the afternoon, before transporting your family to an Italian holiday when you get home from work.

Inspired by a colleague who had come back with a truffled pecorino, I popped in for some KC Continental magia. My head was almost blown off by the smell of truffle as I walked in. But alas the cheese had sold out. But true to form Arkwrightioni sent me packing with some amazing truffled sausages from Tuscany. These puppies positively wreaked of truffle and almost had all the dogs in our office howling like deranged wolves. There’s something deeply primeval about truffles and I couldn’t wait to cook them.

I thought about making an Italian version of toad in the hole with loads of rosemary and a healthy dose of mushrooms, but decided that would be more suitable in autumn. I also dismissed a truffle sausage and bean stew for similar reasons. And sausage and lentil casserole suffered a similar fate. Instead, I opted to combine my amazing truffled sausages with a slick of polenta, a smear of gremolata and some braised fennel.

Make the gremolata by very finely chopping the parsley. Then douse in olive oil and squeeze in a lemon’s juice and add some of it’s finely grated zest. Season aggressively.

Brown the sausages in a casserole dish and set aside.

Meanwhile make the polenta according the packet instrucions. I used chicken stock rather than water which worked well. And then beat in lots of parmesan and butter.

Add the peas to the casserole. Let them cook through. Season everything. 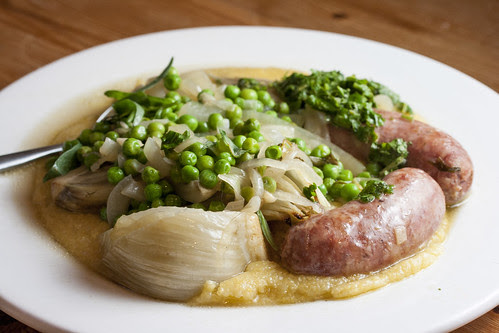 Then serve with a good dollop of mushroom. And a glass of very cold white wine. We probably should have had a Tuscan white… but instead we had a dry German Riesling which worked very well indeed.
Posted by Paunchos at 19:31 5 comments: