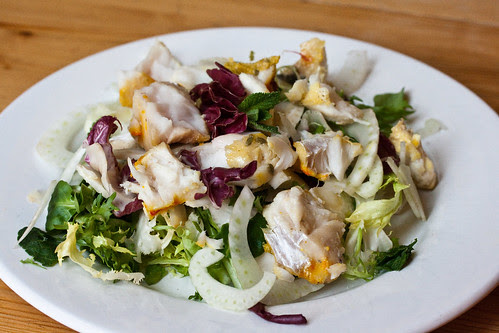 When our washing machine broke down, Cowie was spinning with rage, whilst I grinned to myself and said a quiet prayer to the Gods of domestic appliances, that it might be in a cookable state. I figured that if we had to buy a replacement, my lifelong ambition to cook in a washing machine would be within my grasp.

The engineer’s report indicated that the machine was in a fully functioning state, except that the drum just wouldn’t spin, so he advised us to get a replacement. I figured that this is the dream situation. I checked the internet to see if anyone had done anything like this before and discovered some Americans had, quite brilliantly, attempted to cook scrambled eggs inside whoopee cushions, with highly questionable results. I’ll leave you to ponder what talcum powder-cum-rubbery scrambled eggs would taste like.

When we’ve cooked in lateral ways in the past, we’ve found a sure-fire technique is to improvise a sous vide bag by using a Baco bag and simply throw in a fillet of fish along with some flavours before doing up the bag with an aggressive knot. This approach was a great success when we cooked a fillet of salmon with soy, ginger, chilli and garlic in the dishwasher and the bath.

I popped into Moxon’s on my way home and had one of the most surreal experiences I’ve had in a long time. As I was perusing the selection of fish looking for some hake, one of the fishmongers inquired what I was looking for. Rather absentmindedly, I explained that I was looking for the ideal fish to cook in the washing machine. Silence descended before the boss intervened and asked his colleague to see if they had any hake behind the counter. Luckily they did and I was sent on my way with the fishmongers wondering whether they should call the asylum.

I figured that hake steaks would work well because the bones would support the structure and help them to cook evenly. Also, hake’s firm flesh lends itself to this long and slow cooking method. Rather than the Asian approach, used in the bath and dishwasher, I thought a combination of fennel and saffron would make for an exotic change. 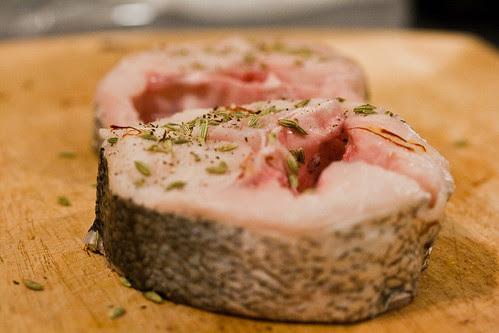 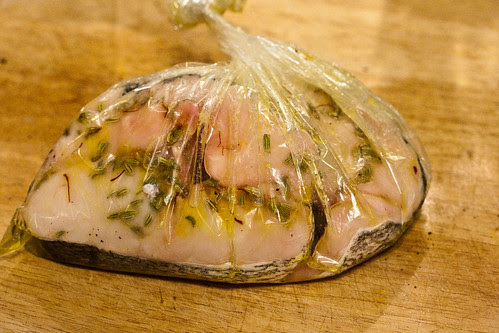 When it came to the big night we popped the fish in a Baco bag along with some fennel seeds, salt, pepper, a dash of olive oil and a few strands of saffron and then set the washing machine on a 90’C cycle.

The machine gushed with water and then started to fill up, with the little parcel gently bobbing in the hot water bath. We sat and watched as the drum thankfully refused to spin and the fish gently cooked. It's an odd sensation having your food locked away without being able to prod or check it. 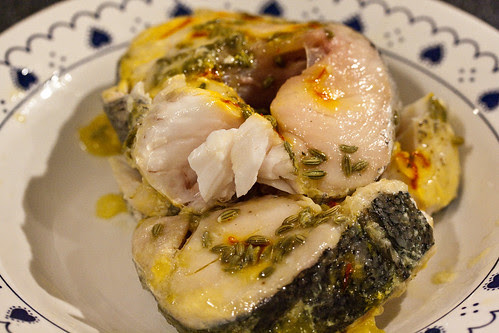 An hour or so later, the door clicked and we were left with perfectly cooked fish, that delicately flaked with a pearly gloss that held together like an MI5 officer under enemy questioning. The only down side was that because I’d put two fillets in the same bag, one of the steaks had slightly distorted into a strange shape. So if you are doing this, use separate bags.

I made a quick dressing by heating the juices that collected in the bag with a touch of cream and a squeeze of lemon and then made a salad with mint and fennel. The salad showed off the pearly white flesh and saffron hued surface whilst the fennel and mint added some crunch and freshness. 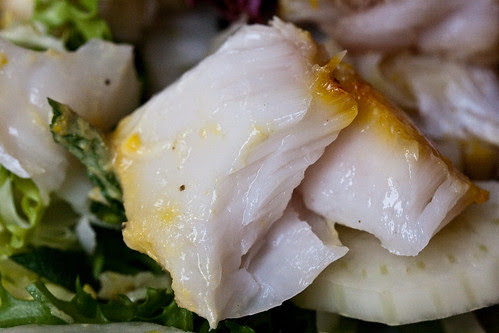 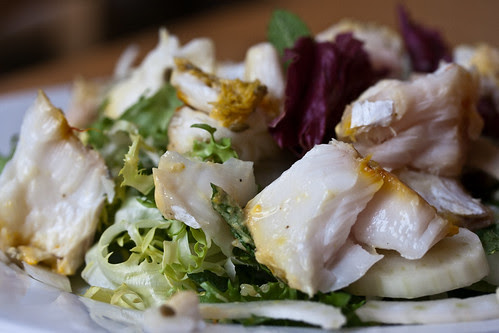 I couldn’t believe how well this crazy little project turned out. I was worried that the fish would be overcooked or uncooked. I was really concerned it would just taste of washing powder. And I wasn’t sure if the drum would kick in and start spinning at random. But none of these things happened and it not only worked perfectly, but it cooked the hake better than I have ever managed using conventional methods!

So when you hear the death rattle from your washing machine, embrace it and send it off to white goods heaven with a decent final meal.
Posted by Paunchos at 08:59 8 comments: