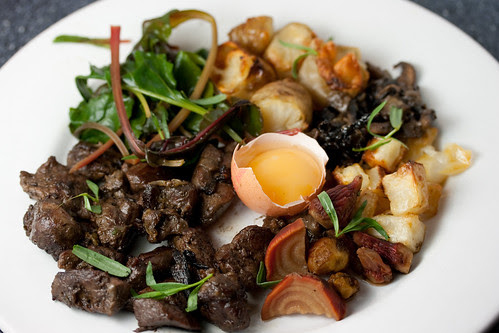 Biff Rydberg caught my attention as I was thumbing my way through a Swedish butchery book. Even though there was no photo and all the text was in Swedish there was something interesting about it. From my basic grasp of Swedish I understood it to be a more grown up version of Pytt i Panna – which is minced beef mixed with cubes of sautéed potatoes that is to Sweden what chilli con carne is to Texans.

Intrigued, I dipped into Marcus Samuelson’s Aquavit book and discovered that Biff Rydberg is indeed a Swedish classic. Apparently it was invented in a hotel in Stockholm – much like the Wallenberger. It’s a very simple dish of flash fried cubes of beef fillet accompanied by squares of fried potatoes, onions and an egg yolk. Super straightforward. High quality food, simply cooked. It could barely be more Scandinavian. Check out Nordic Nibbler's stunning blog post about this wonderful Scandi dish.

My first attempt at Biff Rydberg actually featured elk, rather than beef, supplied by a fabulous Swedish intern whose brother was a keen huntsman. I cubed the lean elk and served it with diced sautéed potatoes and an egg yolk. It was a big success but I forgot to photograph it and felt as though the meal had slipped away. At the time I remember thinking that it would have been even better with some more interesting root vegetables and some tarragon to make the egg yolk form a sort of bernaisey sauce as it mixes with the warm meat and hot potatoes.

When I moved back to London I planted a few Jerusalem artichokes in the spring along with some golden and pink stripy beetroot. All summer I wished them along and marveled as the artichokes grew up into the stratosphere. And cursed as the beetroot seemed to laugh at me as they tip-toed their way towards adulthood. They were destined for my alternative take on Biff Rydberg – along with some wild mushrooms, the tops from my beetroot and crucially, some venison.

The venison was wild and I didn’t know what cut it came from. So rather than flash frying it – it seemed more sensible to sear it and then let it braise gently with some rehydrated wild mushrooms, juniper and red wine.

And rather than using boring old potatoes, I gave the starches an upgrade with c combination of cubed celeriac, beetroot and artichokes which balanced the metallic savouriness of the game with some earthy sweetness.

It’s a lot of effort. But as the egg yolk mingles with the gamey meat and sweet, earthy vegetables you’ll hopefully agree it’s worth it. It was so satisfying to put my artichokes and beetroot to good use.

For the braised venison

Dust the venison in flour and season with salt and pepper. Brown the meat in a pan. Remove from the pan. Then sauté the onions. Then deglaze the pan with red win and add the venison and juniper berries having given then a gentle bruising first. Chuck in some dried tarragon and the rehydrated wild mushrooms along with enough liquor to cover the meat. Cook in a low oven until the venison is soft. Set aside and get cracking with the other parts. 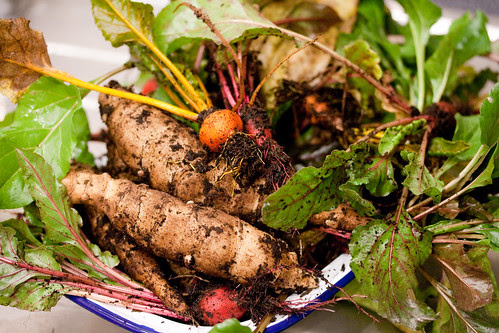 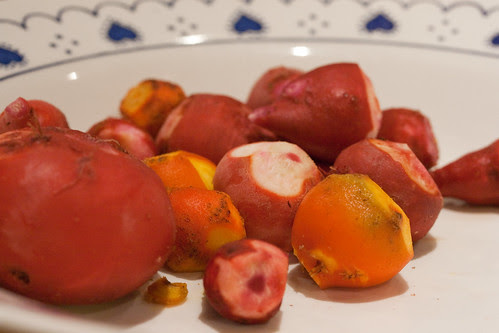 Bake the beetroot whole. When they are cooked peel off the skin and then slice into cubes and keep warm. Mine were so small there was no need to cut them.

Cut the celeriac into 2 cm and the Jerusalem arichokes into 4 cm chunks and then parboil in salted water until they are almost tender. Then drain, dry, season and roast in a hot oven for 20 minutes or so until golden.

Steam the beetroot tops (or spinach if using) just before serving.

Separate the venison, mushrooms and onions from the liquor and reduce this to a sticky, syrupy sauce.

Arrange the venison in the centre of the plate with an egg yolk nestling inside its shell. Then add the cubed root vegetables so that they fan out across the plate.  And fit the beetroot tops in where you find space. Adorn then meat with the mushroomy mixture and the now reduced sauce. Then scatter the fresh tarragon over the whole plate along with as much seasoning as you think is required. And finish with a little spritz of lemon juice to help the egg yolk and tarragon to meld. 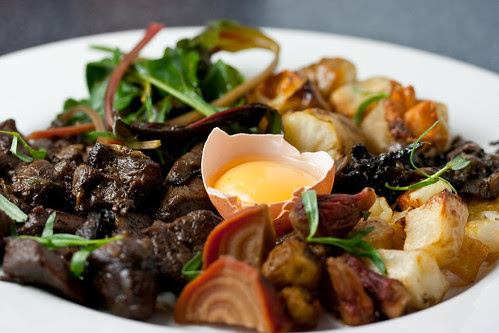 Enjoy with a nice glass of red wine.
Posted by Paunchos at 19:56 7 comments: