Food tastes so much more vivid when you feel like you deserve it. We discovered this on our epic cycle trips for lunch which took us to Wild Garlic in Dorset, Bills in Lewes, The Horse Guards Inn in Sussex, The Hole in the Wall in Cambridgeshire and the awful Albany in Thames Ditton. It was a great way of making Cowie’s triathlon training fun for both of us. Circumstances have changed since then, with Cowie’s bike being pinched and now it’s me that’s in training whilst living in Sweden. So in light of this we decided to preface our dinner at The Greyhound in Stockbridge with a cheeky half marathon through the Hampshire countryside.

We arrived in Stockbridge on a glorious late winter’s lunchtime, donned on our running kit and spent the next 110 minutes marvelling at the stunning countryside, whilst gasping for breath. Our time would have been considerably quicker had I not kept on darting into the bushes to look at mushrooms! It’s fair to say that our run acquainted us with the pub’s “terroir”, or whatever the less poncy English equivalent would be. And more importantly left us famished. I was hoping that on our return to the pub that we’d be treated like London Marathon runners – but with the free Lucozade and power gels being switched for pints of ale and pork pies.

The Greyhound is one of the feature pubs in Diana Henry’s Gastropub Cookbook, which from past experience is normally a cast iron recommendation. The menu is pleasingly short and full of hearty options with the odd hint of flair, whilst the wine list offers a far more interesting range of wines than you’d expect. The cosy dining room with soft lighting and nude wooden tables is the perfect balance of rusti-city. 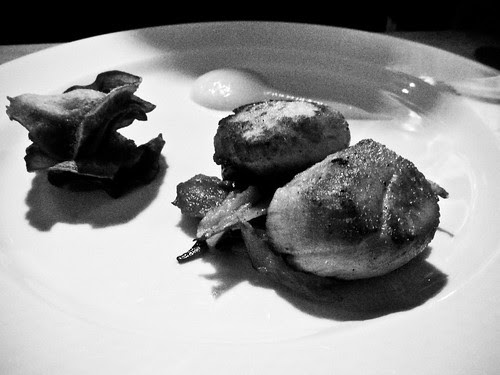 After bingeing on not terribly impressive bread, Cowie’s plump Scottish scallops with Jerusalem artichoke puree, chorizo and sweet potato crisps were very welcome. The superb cooking and beautiful presentation ensured this archetypal modern British starter didn’t slip into cliché territory. Cleverly, the crunch of the sweet potato crisps made the scallops taste even more of themselves. It was a cracking multi-sensory plate of food that drew you in to its warm embrace. The only thing it lacked was a sharp element, but in fairness a glass of Sauvignon Blanc picked up where the food left off. My soft boiled duck egg croquette with smoked salmon and herb aioli was exactly what my aching muscles were yearning for. I adore duck eggs but unfortunately they have a rather gassy effect on me, which meant that Cowie almost disowned me for ordering them. In fact, this petty act of rebellion made it taste even better. The thin, crisp batter around the soft egg was perfectly executed. The smoked salmon was very good too, without being phenomenal, but the real highlight was the way that these rich elements combined with the peppery salad leaves to elevate this to a higher plane. 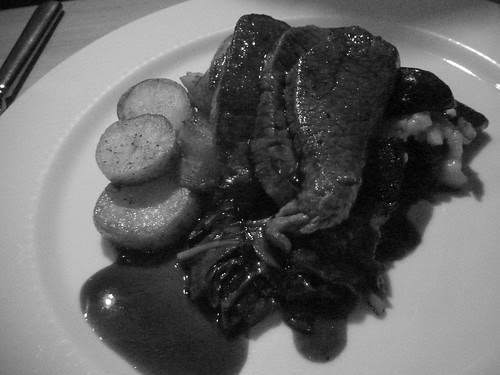 Cowie’s venison was beautifully crimson and sauced with a slurry of savoury, rural flavours. The earthy spinach, beetroot and venison tasted like an artist’s impression of the run we had just been on. Good solid stuff. 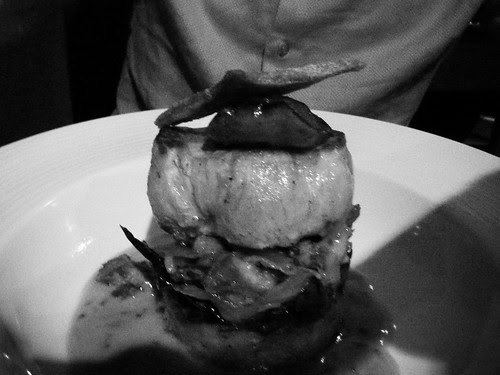 My tower of pork, crackling, fondant potato, fennel rillette and cider velouté, looked and read a bit like a Gordon Ramsay dish from 2003. Whilst it looked a bit Esher, it tasted of Exmoor. Aside from the name and look, my only criticism was the slightly dry meat and overly salted crackling which felt like it had been hanging around a bit too long. Is it just me being a snob, or are stacks of food a bit naff these days?

Puddings were from the comforting end of the spectrum as you’d hope from a pub. Illicitly creamy rice pudding with rhubarb compote was one of the best I’ve had and Cowie’s pear tatin was decent without being anything to get too excited about.

We dragged our weary bodies up to our sloping, but very comfortable bed and reflected on our well deserved evening of indulgence. Over an excellent breakfast we picked apart our meal from the previous night. We agreed that the food had been very well cooked. But we wondered whether it would have been more interesting had the food reflected the surroundings more. What if Mr. Smidgens from Longstock had smoked the salmon? What if Farmer Geoffrey from Stockbridge had provided the duck eggs? What if the venison had come from the New Forrest? What if the menu had been written in plain English rather than borrowing the occasional fancy expression from French? What if the menu had been studded with a few Hampshire classics? And does any of this even matter?

When we re-read the menu it could have been from any fancy pub in the UK – whereas our favourite country pub experiences have had a more obvious and attractive connection with their location; all the meat at Y Polyn was from local farmers and the sea trout was caught by a coracle fisherman; at the Wellington Arms the game is provided by a local huntsman; and at the Kings Arms in Strete all the fish is from the local harbour. The fact that Scotland featured three times on the menu in the form of mussels, scallops and beef and the local area only twice with cheese from the Isle of White and pork from Greenfield farm, isn’t a big deal, but it would have been great to feel like you are eating the best food that the local countryside has to offer. Likewise, there’s something reassuring about seeing offal and slow cooked dishes that turn pigs ears into silken purses, but “loin”, “breast”, “fillet” and “rib-eye” occupied the expensive shallow end of the taste spectrum rather than the powerful deep end of ox-tail, belly, cheeks and trotters that make me want to dive in off the top board.

In short, whilst the food was delicious and we’d recommend it warmly, we didn’t think it quite lived up to the top billing it gets in The Gastropub Cookbook. The food is safer and more restauranty than we were hoping for and lacking that thrilling punch of offal, slow cooked meat, imagination and local soul that are part of the best gastropubs’ DNA.

As we drove back to London we wondered whether Diana Henry’s books, which we’ve loved, are beginning to show their age. The first version is now seven years old and I imagine many of the chefs have moved on – as is the case with The Greyhound – and pubs will have changed hands. And the gastropub movement has evolved dramatically since then. Maybe it’s time for a new edition? If Diana Henry wants a sidekick to help with this arduous task, Cowie and I would love to help!
Posted by Paunchos at 09:24 4 comments: