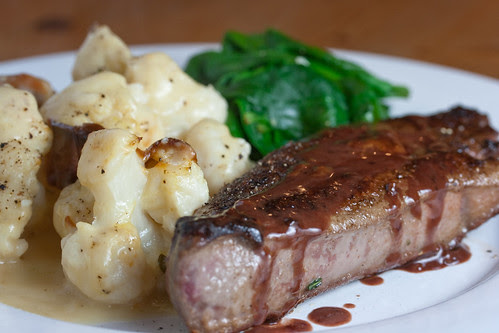 Brunost (AKA Gjetost or Gudbrandsdalsost) is an amazing substance. It’s a Norwegian cheese that is typically made by mixing goat’s whey with goat’s cream and reducing it down until you get a dense, fudgy, sweet and savoury caremlised cheese that’s really hard to pin down. All Norwegians have a block or tube of it in their fridge which they eat on crackers and other snacks. It was considered healthy because of the high iron content, but it has since been downgraded to a health risk because of the high fat content.

It packs more calories than any other cheese, leaving even the mighty Parmesan in its wake. It’s like a cheesy Daim bar that has a powerful tang.

I first encountered it in Gothenburg when the 6 foot blond Swedish girl with an Irish accent on the cheese counter in the local market gave me a nibble of it and explained that people often lob a bit into the pan juices when they cook a steak or game to make a rich gravy. I gave it a pass at the time, but half a year later had a sudden hankering to try it out.

I asked a few Scandi friends who pointed me in the direction of a few recipes that suggest mixing a small amount with meat juices when cooking steak, elk, moose or venison. I figured that a nice piece of calf’s liver would be just as good and decided to accompany it with a rich Norwegian take on cauliflower cheese that was spiked with fudgy brunost.

Basically, make cauliflower cheese as you normally would by blanching some cauliflower and then smothering in a cheesy, béchamel based sauce, topped with grated brunost.

I like to mix the milk half and half with stock and find that gruyere is an ideal cheese. But what makes this special is the addition of brunost which gives the cauliflower cheese a sweet and sour kick that works brilliantly with the liver. 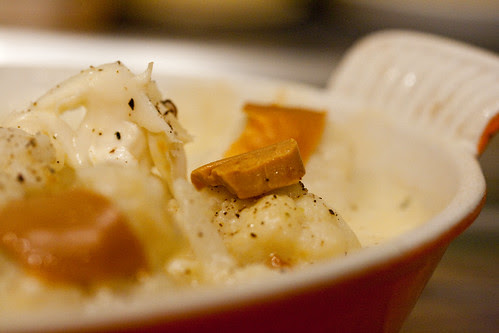 Simply grate the brunost over the cauliflower cheese and add a few lumps as well as you see fit. Season with salt and pepper and then throw it in the oven for 20 minutes until golden brown.

Then season the liver with salt and pepper, dust with flour and then sear in a very hot pan for a few minutes until the outside is browned and the inside is still pink. Allow to rest somewhere warm and in the meantime deglaze the pan with a spash of red wine. Then whisk in a knob of brunost and reduce until you have a thick, fudgy gravy. Taste as you go and adjust the seasoning. 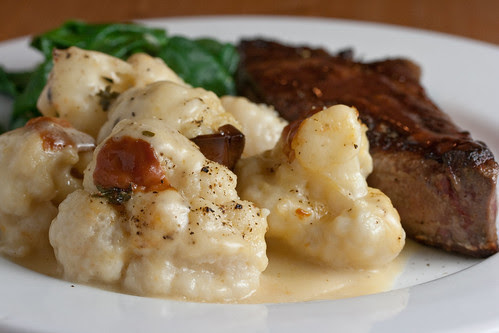 Serve the liver adorned with brunost sauce and flanked by cauliflower cheese and spinach. For wine pairings for brunost dishes, check out Snooth, but you might be better with beer.
Posted by Paunchos at 11:32 5 comments: