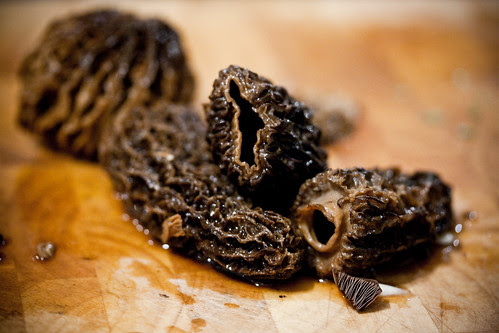 My Godfather gave us an unbelievably exciting collection of dried wild mushrooms as a very generous engagement present. The sight of jumbo Morels, dried Chanterelles, Porcini and Trompettes de la Mort were too much to cope with, so I decided to give our Flaming Wild Mushroom Pancake recipe another outing, but with turbo charged fungus.

We first created it for our entry into this year’s Pancake Day competition. It came about when we wondered how we could capture the excitement of a flaming Crepe Suzette with my obsession with mushrooms. Initial plans involved truffles and fine cognac, but it got scaled down to a more sensible wild mushroom ragout spooned inside a pancake and then doused in flaming brandy.

Full of confidence and low on voting smarts we came second in February to a Chile Con Carne Crepe, which, it pains me to say it, was a deserving winner. Stung by defeat, we went back to the chopping board and tweaked our recipe to dial up the shroom factor and weave in some complementary flavours into the batter and mushroom ragout.

We decided to add some porcini powder and chives to the batter to make it more savory. And also threw in extra tarragon, thyme and parsley into the ragout to make it more complex. We also decided to use Taleggio rather than Parmesan because it melts better and has a tang that makes the mushrooms stand out more.

Start by making the batter. Whisk together the flour, eggs, water and add in the porcini powder or dried mushrooms.

Then chop the chives very finely and add them too. Let the batter prove overnight.

Rehydrate the dried wild mushrooms in boiling water and leave to steep for 30 minutes, or as long as the packet says.

In the meantime, fry an onion in olive oil and butter over a low heat and once softened add in the chopped garlic. Don’t let it brown. Then add the chopped fresh mushrooms and cook until soft and coloured. Add some salt and sauté until the liquid that the mushrooms leach has bubbled away.

Then squeeze the now hydrated, formerly dried, mushrooms into their bowl and add to the pan. Give this some heat to drive off the excess liquid and then, perversely, add in the mushroom stock 200ml at a time. Reduce this down until there it is a bit saucy.

Then add in lots of chopped tarragon, thyme and parsley. Season and then add in 100ml of double cream and continue to reduce until you have a rich mushroomy sludge. 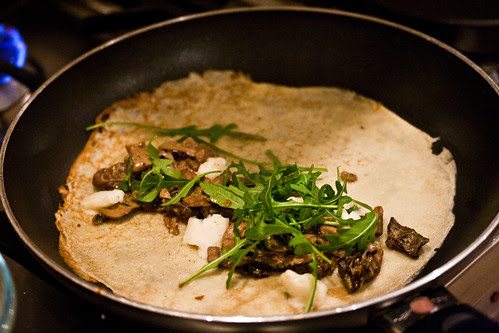 Keep this warm and fry some pancakes using the now proved batter. Once you’ve fried the pancake on the bottom, flip it and spoon some of the mushroom ragout onto half of the pancake. 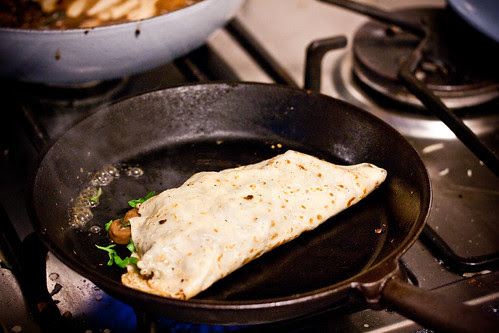 Add a few rocket leaves, a few slices of taleggio, salt and pepper and fold over. 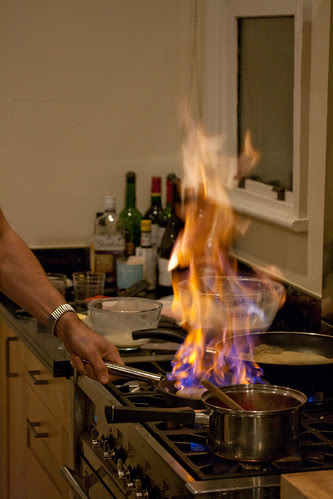 Pat down with a spatula and douse in brandy over a hot flame. Stand back. 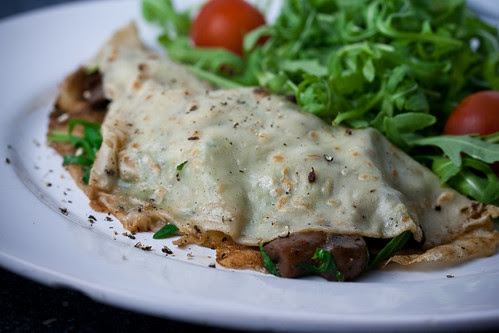 Serve with a peppery side salad.