Roast Gurnard with sage and squash 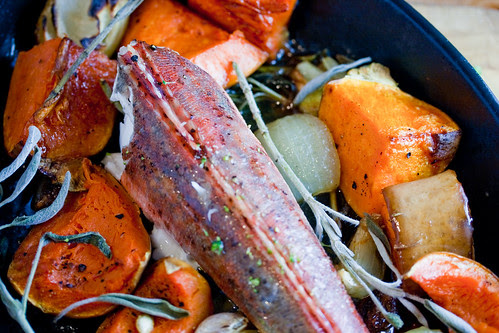 When we were in Salcombe a few years ago we went on a memorable fishing trip where I managed to catch nothing but sand eels whilst the rest of the gang reeled in a whole school of mackerel. A friend called Nick, who could catch a sea bass in a 2 inch puddle, even managed to snare a gurnard much to my shame. But then again he is a fish magnet.

In contrast to my sand eels, and the mercury coloured mackerel bullets, the gurnard seemed exotic and of another world. With big eyes and a red mohican it looked worryingly like the three eyed fish that is found in the river near the nuclear power plant in the Simpsons. Ever since this encounter I’ve been keen to cook one.

My chance belated came the other day. I popped into Moxons on my way home, in search of a modest piece of fish. I was thinking of lemon sole, Arctic char or mackerel, but was seduced by the idea of a large gurnard.

When I inquired how to cook it the fishmonger instantly dictated that I roast it with sage and pumpkin. I could have spent ages thinking about what would have worked well. But sometimes a bit of firm direction works wonders. On a hot summer night you’d probably be better with something more lemony and acidic, but if it’s a bit cooler this is a great way to enhance the earthy and mellow nature of gurnard.

Cut the squash into bit sized chunks. Season with salt and pepper and roast in a medium oven along with the garlic cloves and sage leaves.

Prepare the gurnard by slashing the skin, seasoning and studding with sage butter.

After 30 minutes when the squash is getting soft, place your gurnard on top of the squash.

Cook for 10 minutes until the fish is just cooked. Remove from the oven and wilt some spinach in a pan.

Serve the gurnard whole, with the squash and spinach on the side. Squeeze some lemon over the fish and spoon whatever juices are left in the pan over the fish. 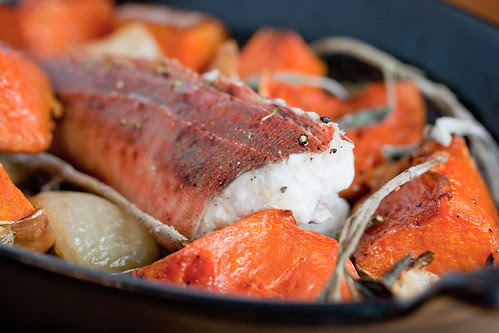 Posted by Paunchos at 18:32 No comments: