Normally people barbecue sensible things like sausages, burgers, steaks and pork chops. If they are feeling adventurous some marinated chicken drum sticks perhaps... but only if the girls don't get squeamish about undercooked chicken!

Last year Cowie and I went camping in a field at Mulacott Farm in North Devon. We went a bit crazy and barbecued a lobster and some tuna that we had bought from Barnstable's sensational market that is just down the road. 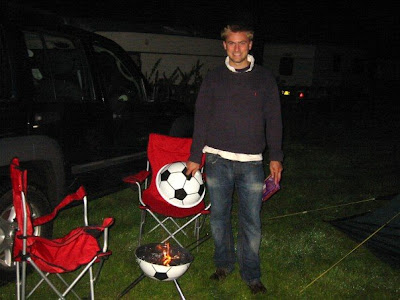 Spurred on by last year's success we decided to take things a step further. We went to Jamie Oliver's Fifteen, near Newquay, on the Thursday before the August bank holiday before zooming up to North Devon on Friday morning for three days of camping... we met up with Anna and Edwin on Friday afternoon followed by Jack and Kira on Saturday morning for some surfing.

We got to Barnstable around lunchtime and immediately headed straight for the fishmonger whose counter was overflowing with bright orange lobsters, Loch Ness sized conger eels and every fish you can imagine. We struggled long and hard to work out what to get... we netted out with a large lobster from Lundy Island, 2 sea bream and two handfuls of skate cheeks... I'd taken so long deciding what to have, ogling the amazing display, that quite a queue had built up around me. The lady right behind me nodded approvingly at the choice of skate cheeks so I felt I'd made the right decision. Even the fishmonger seemed to be impressed with my choice. The truth is I had no idea what they were... sensing I was a bit lost the fishmonger explained that they are the bits of meat behind the head of the skate and are great fried in garlic butter like scallops. Excited by this little tit bit of knowledge I shocked Cowie with my selection... £27 was more than I'd planned to spend... but it was something new to try and I was like a boy in a sports shop! 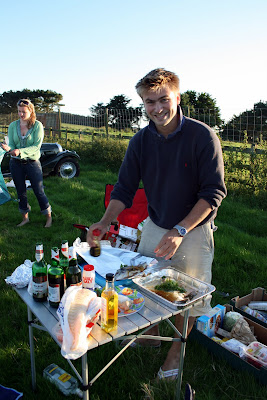 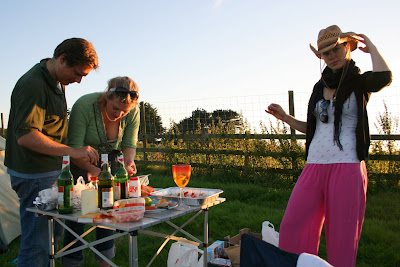 We cooked the sea bream in a foil parcel with soy sauce, ginger, chili, coriander, garlic and spring onions. It only took around 10 minutes to cook and tasted divine. The smell of sticky, salty flesh was as good as the taste. We were off to a sophisticated start! 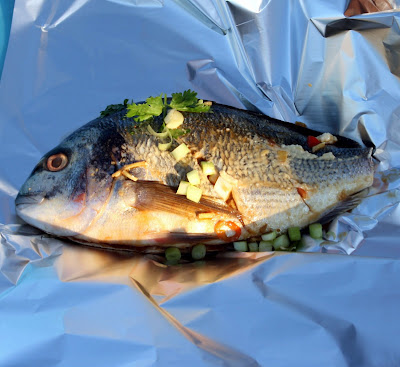 Next came Anna's Mum's cod and bacon skewers. You can see Anna patiently constructing her brochettes with courgettes and peppers below. They were delicious! 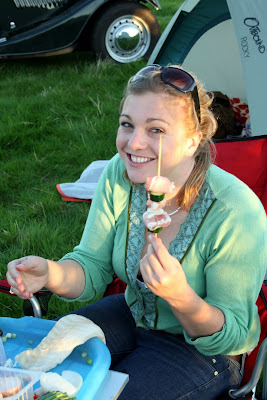 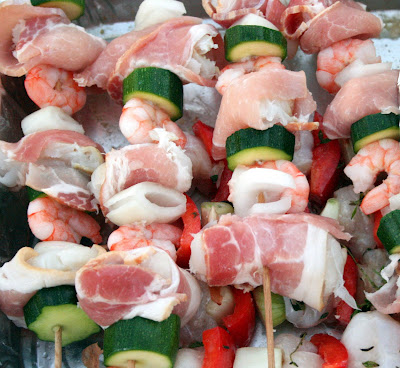 Round 3 saw the stakes raised with the lobster lobbed on the grill with some butter and garlic smeared over the meat. It doesn't get a lot more straight forward or tasty as this. By this point we had tucked into a couple of bottles of wine and felt like we were in a campsite version of Sheeky's! I nipped off to do a wee and came back to that unmistakably sweet, fishy smell of lobster! Our neighbours eating their sausages and burgers were somewhat in awe of the haute campsite cuisine being knocked up... Then almost as an afterthought we tossed on our skate cheek skewers, brushed with garlic and olive oil. I left the skewers on for as long as you would cook scallops and whipped them off with trepidation. I could sense they were going to be good... but none of us were prepared for them to steal the show. The best way to describe them is to imagine the juicy, tenderness of scallops and the flakiness of medium rare cod and the taste of skate. Incredible. I had never seen them before and was frankly bowled over... why is no one else cooking with them?! 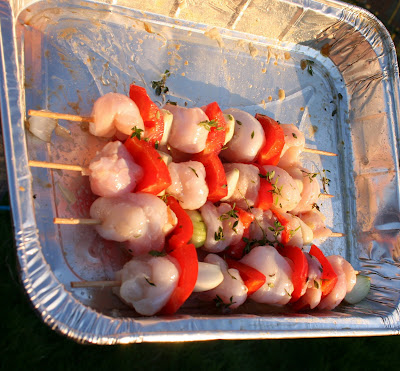 We sat, full of fish and nicely warmed by the booze and fire thinking that we couldn't have eaten better for hundreds of miles around. There's few things better than fish, fresh out of the water and barbecued.
Posted by Browners at 19:34