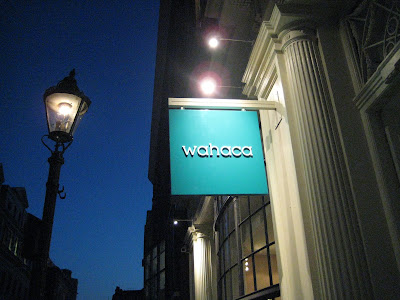 The moment this place opened Browny and I have been dying to go. Having eagerly followed Tommy's (Thomasina Myer - Masterchef winner) progression through Masterchef in 2005, where she become the eventual champion we felt we almost knew her like a friend!

From there she has clearly gone from strength to strength. Two books, a TV series but more importantly she has opened a cracking restaurant, producing food that is close to her heart... no nonsense, basic Mexican street food. During the Masterchef series there were numerous references to the time she had spent in Mexico and her love of all things Latino really shone through.

When we arrived I was immediately struck by the fantastic bay window, subtle lighting and boxes of fresh goodies piled high in the window. We then descended into the restaurant to meet the ever increasing queue.... we knew this place was popular when we arrived at 7pm, wanting a table for two had to go for a drink for 30 mins! But when we returned we were swiftly taken to our seat. 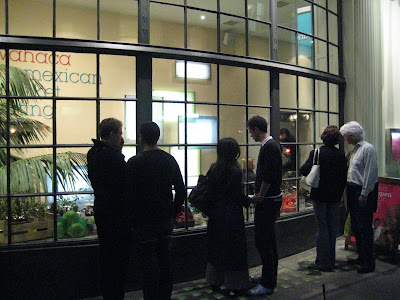 The atmosphere was cool, funky, lively and buzzing; Think Wagamamas but more so. My bum had barely touched the seat when our waiter, Jim, bounced up to the table, and in a very enthusasactic fashion started to reel through the menu, giving recommendations left right and centre... all in all.. I was impressed! However.. this didn't last long... I will explain later. 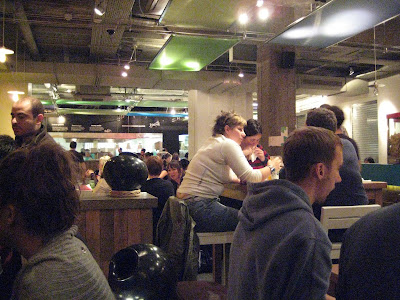 The menu is varied and exciting. We picked a small selection of street food.

2) Chicken, steak and pork tacos..... the differing fillings were interesting, unusual and tasty however we were slightly disappointing tacos - bit greasy

3) A fish taco in lettuce.... umm, not a classic. Rather dubious nameless 'sustainable fish'.

5) Black bean and spicy slaw open taco... A typical Mexican dish that served its purpose but rather uninspiring.


We were stuffed at the end and despite wanting to order some more goodies were restrained ourselves therefore not letting the law of diminishing returns kick in. Our mouthes were just the right side of blasted thanks to some delicious chilli sauce from Devon.

They have got a great range of tequila which are served to be sipped in hand blown glasses. Get stuck into these at the bar and you'll never dream of having a dicey shot of Jose Cuervo with salt and lemon again! Would like to see some Sauza on the menu thought! 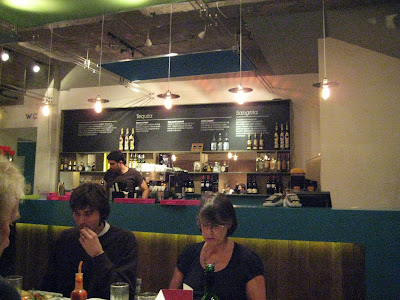 This restaurant is proving already to be very popular and it has a great vibe. It was reviewed in Olive magazine last month and in the Times over the weekend by Giles Coren as well. The food says what it does on the tin... but really is far better than your average Mexican restaurant. Ideal for a fun night out with a group of friends or equally good for a couple to enjoy. Are only major gripe was how annoying our waiter called Jim was. We think he must have got confused with the TGI Friday just over the road. He couldn't help himself from explaining everything. I felt like explaining to him what his job was!

Great fun place - not necessarily for food that grabs you by the bollocks but perfect for an entertaining, cheap evening with some mates. Looking forward to seeing these pop up like Nandos and Pizza Expresses across the country.
Posted by Cowie at 17:06