Whilst I was away on holiday Oli and a couple of the guys at work went to the Fat Duck. Here's Oli's review of the meal as the Paunch's first guest blogger!

Anyone who is interested in good food and enjoys going out to fine restaurants should never go to the Fat Duck. It is just so good that you will never enjoy another meal quite as much again.

With that said, I was "lucky" enough to be taken to The Fat Duck last week. I was initially quite worried about whether the place would live up to all I had read and seen about it in countless articles and TV shows. So much so that I had a string of nightmares in the month leading up to our visit, where the meal passed me by and I missed out on experiencing any of the molecular delights that Heston had prepared.

In fact, quite the opposite occurred. We (Ed and I) spent an hour and a half waiting at our table until the rest of our party arrived, so had the opportunity to take in the full atmosphere of this tiny place before we started eating. We observed the meticulous way in which the staff waited on tables around us, and polished the silver trays in search of glimmering perfection. All the while we were tucking in to the champagne trolley!

When we did come to order, the tasting menu was chosen by everyone (including a vegetarian option for one) – In fact we were told by our waitress later that 95% of people do go with the full tasting hit, reinforcing our faith in the fact that we had chosen wisely.

It Started with a green tea mouse, cooked in liquid nitrogen as a palette cleanser - Standard fare really - They sprayed a lime mist into the air at the same time as you popped it into the mouth to give a whole fresh feeling before you started. It woke you up completely and got you ready for the divine onslaught of what you were about to receive. 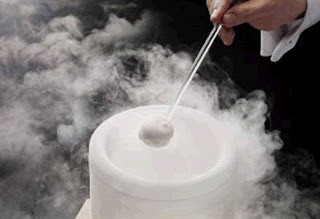 For the second course we had an oyster, with passion fruit jelly and a spot of horse radish cream. I've never liked oysters before really, but this was amazing. It had a kind of salt sail sticking out of the top that gave it an little crunch that you are after. 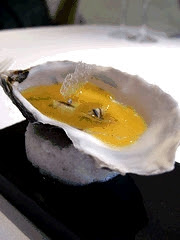 Then there was a really light mustard ice cream, with a tiny bit of shallot, chopped finer than a gnats whiskers. They then poured a red cabbage soup over it which made it like a gaspacho. Very tasty and a sign of the flavour combinations to come. 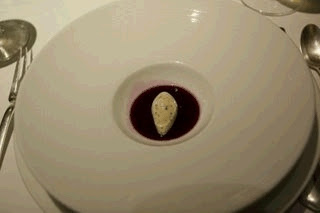 Then they brought out a tray of woodland moss, and plonked it into the middle of table onto which they poured a moss flavoured tea, which I think hit some dry ice in the bottom of the tray as it filled the table with a really nice smelling cool mist, giving you the sense of being in a alpine woodland. They gave us one of those films which melts on the tongue (a bit like those breath freshener things), and then to go with it a jelly of quail, with foie gras quenelle on top of a langoustine cream - They told you to cut through the different layers with a special spoon so that you could have the flavours combining on your tongue. It was like heaven in a small bowl. Ooh and it also had a small piece of brown toast, with black truffle. All giving a feeling of earthy woodland to the course. 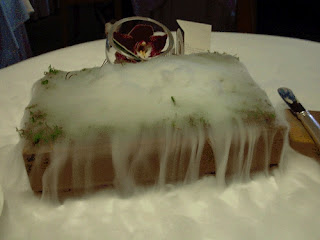 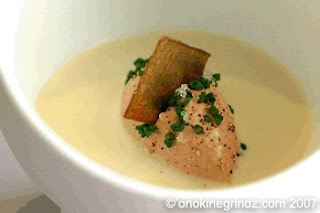 Next up, the world famous snail porridge. It was very nice, but I don't think it was the most amazing thing in the menu - it was delicious, but I think that what we were about to be served had more reason to be famous. Roast Foie Gras with almond fluid gel, cherry and chamomile - My goodness me. I’ve said in the past that I wasn't a massive fan of foie gras, but that was before I’d been served something quite like this. It was the softest thing I've ever put in my mouth, and it was utterly delicious, there wasn't a hint of the bitterness that I haven't liked in the past and it went so well with the cherry and chamomile. 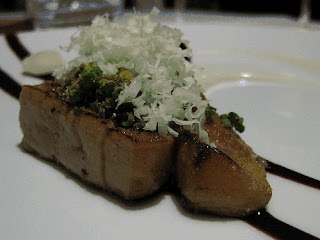 Next up, a conch shell is placed in front of us, out of which protruded a set of iPod headphones. Slightly odd. Then there was a glass plate suspended over a sandy bottom, with what looked like a beach with shellfish all washed up in a frothy sea spray. 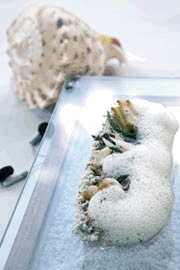 It included various types of seaweed from Japan, a muscle, an oyster and a clam and apparently a baby eel. All of which was eaten with the sound of seagulls ringing in your ears. It was a complete sensory explosion.

All this time, we had been drinking a bottle of Mersault premiere cru, which was a delicious white burgundy, and on top of the couple of glasses of tattinger I was starting to feel ever so slightly dizzy.

Onward with the final fish course. Salmon poached in liquorice with flecks of red grapefruit aged balsamic and olive oil. Then it had a miniature artichoke with it and a streak of vanilla mayonnaise, which was really nice. This is the one that I think was the best visually on the plate and I keep picturing it when I close my eyes now. I looked like a small square of leather in the corner of a massive plate with multi coloured flecked polka dots. When you cut into it, the leather was actually like a black liquid coating over the softest and most delicate salmon I've ever tasted - I guess cooked sous vide. 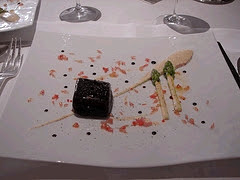 Moving into the main meat course, it was a ballotine of Anjou pigeon with a black pudding sauce that was just like melted chocolate, and probably the second smoothest thing I've ever had in my mouth (after the foie gras). It came with a little pickled onion and another foamy sauce made with the pickling brine. It was fabulously tender and tasty. 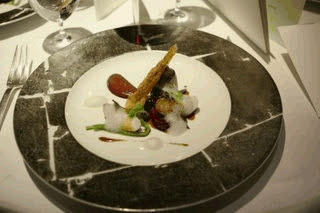 We were now strongly onto the reds, and we had a delicious bottle of Cabernet Sauvignon, a Rioja and a Portuguese wine (to try something different), at which point it wasn’t just the tiny onions that were a little pickled.

Just when you are thinking that you have tasted it all they brought out a small mug of tea. Which seemed a little plain. The name should have given it away, it was called Hot and Iced tea. When you sipped on it, half of the cup was hot tea, and half was iced tea, and it mixed in your mouth amazingly. It was like some kind of magic trick. Somehow it stayed unmixed all the way to the bottom, I couldn't quite explain it, but it just made you want more. 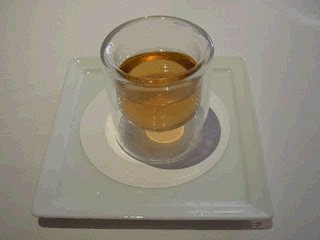 Starting off the deserts a little booklet was brought out all about Mrs Marshall's ice cream maker, who apparently was the Mr whippy of her day. This accompanied a tiny cornet of ice-cream with ginger and apple ice cream, which really took you back to seaside childhoods, which I think was the intention – to evoke nostalgia. 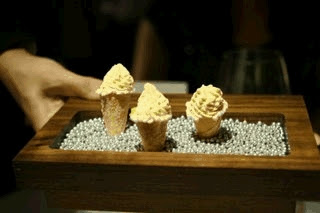 Once this had disappeared, they brought out a "Pine sherbet fountain" It was a miniature sherbet fountain, flavoured with pine and instead of a liquorice stick, it was a vanilla pod - very tasty and completely different - I think that he has a thing about pine forests and harking back to the nostalgia of your youth. 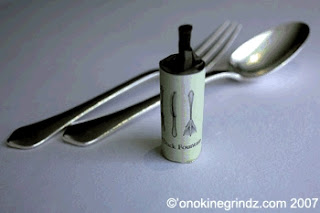 Into desert proper and there was a Mango and Douglas fir puree, served with a barois of lychee and mango - not sure what that actually means, but it tasted good and came with a delicious blackcurrant sorbet. At which point the pudding wine was flowing - It was a Tokai that the sommelier explained had 200g of sugar per litre, as opposed to 7g per litre in champagne. Sweet.

What on earth could come next?

The waitress strolled over and greeted us with "Good Morning!" - It was about 4 in the afternoon. She then produced a cereal packet and a jug of milk. Inside the cereal packet was a bag of parsnip corn flakes, and the milk, was parsnip infused to go with them. It was a bit weird, but somehow really woke you up when you were feeling just a little bit snoozy after course number 13. 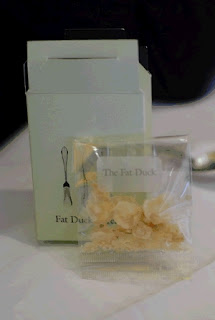 This was followed by another "good morning" as she came over and appeared with a box of eggs. She opened the eggs, cracked one into a bowl and then poured liquid nitrogen over it, instantly turning it into egg flavoured ice cream, This was then served up with a freeze dried slice of the thinnest bacon on top of a bit of eggy bread. It also had tea flavoured jelly with it, which really freshened up the mouth as we were nearing the end of the meal. 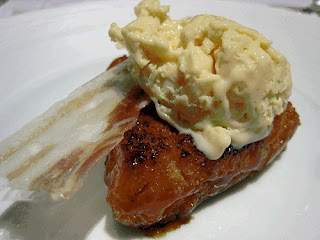 You know at the end of a long meal when you just fancy a whisky, but you aren't sure what to go for, well the next course really nailed that for you. It was delivered in a picture frame showing a map of Scotland and a bit of Tennessee, onto which were stuck 5 different jelly whisky bottles made with malts from around the country. It was amazing - the Glenfidich tasted just like it does from a glass, as did the Laphroaig, the Oban and the Highland Park, it was finished off with Jack Daniels, which was a pleasant surprise with a sweetness that the others didn't have so much. It was such a nice way to have all of the whiskey that you might otherwise not have been able to have.

We finished off the meal with a selection from the Chinese tea menu, which was served as an individual tea ceremony, exactly as we had done it in China, which beats a cuppa with some milk hands down. This was served with Petits fours - A carrot and orange lolly, mandarin aerated chocolate - a bit like an orange aero - a violet tartlet, which was bright purple and tasted exactly like a Palma violets that I had in Madrid a few weeks ago and finally an apple pie caramel, it was served in a wrapper that dissolved in your mouth so you didn't have to unwrap it.

So that was it. Just imagine the best meal you have ever had - I'm pretty sure that it was really really good, but no matter how good it was, I'm going to put my cock on the block here and say it won't come close to this. I really think that I'm never going to eat anything as good again, which makes it amazing, but it does mean that it's down hill from here!

So as I say, never eat at The Fat Duck, please. Unless you’re terminally ill, in which case, eat there, lots. 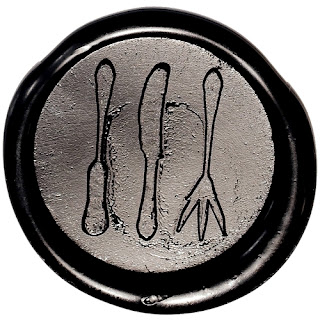 When I read the title of this post, I just HAD to read it, because I couldn't imagine not loving the experience.
I had the pleasure of celebrating our wedding anniversary at the FD and also enjoyed every second, every taste and smell. Thanks for the brilliant post and for the great pictures, They were a wonderful reminder of the special time!