I've been trying to find a word for the Spanish equivalent to a pig shepherd... if anyone knows the word please let me know and we can chirsten this recipe properly. For the time being it's called "Chorizo Pie" which doesn't come close to doing it justice!

What you do is make the chorizo, butter bean and smokey red pepper ragu a la Nigel Slater. Then lob in a load more smoked paprika. Cook it in the slow cooker for ages and then leave the lid off for a few hours at the end to reduce it down. It'll turn into a deep red sludge that tastes like Hades (in a good way)!

Pour a good load of ragu into a large baking dish and then top this with some sauted garlicy spinach and a good twist or two of salt and pepper. Then lightly char some sliced chorizo and layer this on top of the spinach before topping with riced potato. Spinkle a seriously unhealthy amount of Mexicana cheese on top and then cook in the oven until you've got a sinfully crispy golden top and the pie is cooked through. 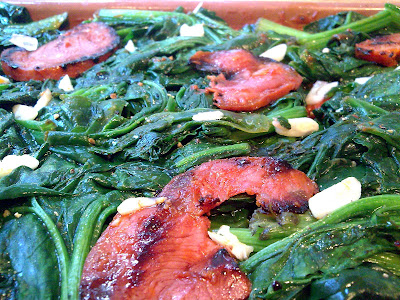 Then open a robust bottle of red wine - preferably Rioja - and settle in for one of the most satisfying meals you could imagine. This has quickly become one of my all time favourites.