Our bus chugged out of Ernakulam station and headed east towards the magnificent Western Ghatts. For two hours we snaked in and out of manic traffic before we emerged at the lucious green fringes of the mountains. The once diesel clogged air vanished leaving us gasping at the pristine fields of rice and the sight of mountains trying to out-do each other stretching into the distance.

Our bus revved up at the challenge ahead. It accelerated around every hair pin bend and seemed to try to barge oncoming vehicles off the road. Cowie and clung on to the bar in front of us like my mother would do on a rollercoaster! Luggage veered across the bus. Epic scenery whizzed past our glassless windows.

The vegetation at the base of the mountains was mainly rice but quickly changed to banana plantations and rubber trees which had plastic bags tied around their thin waists. After 4 hours of driving Cowie was becoming disappointed that we hadn't seen any tea plantations yet. And no sooner had she said the word tea, than we'd rounded a particularly dangerous bend and seen this view... 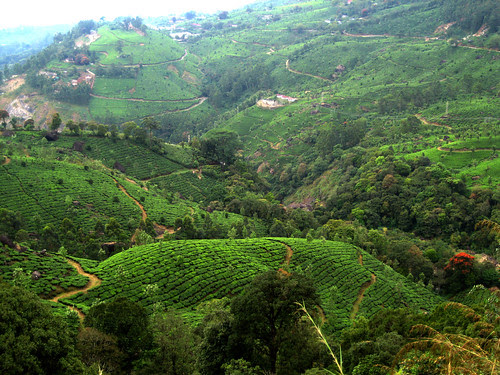 The air was cool and misty. So different from the hot, muggy air of Fort Cochin. Just the sort of climate that would suit British people in need of some respite. I guess this explains why Munnar was once such a favourite with the British! The climate is obviously perfect for tea as well. Once you get past a certain altitude every visible slope is covered in Camellia sinensis plants.

By the time we'd settled into our room the sun was beginning to dip glowing with a yellow hue first... 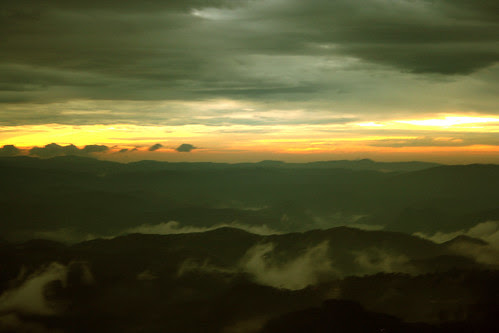 ... before departing for the night with a purplish burst... 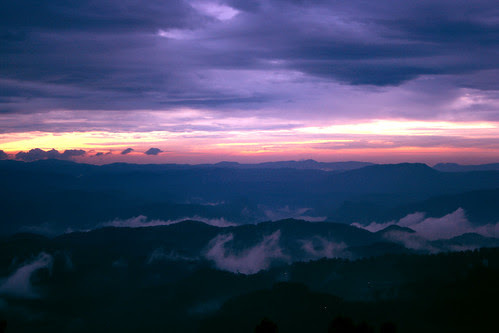 As far as I could work out, we were at the highest point that this latitude has to offer anywhere around the world. Looking west every hill was below us.

The next day we were taken on a tour of the tranquil tea and cardamon plantations. Each tea bush is trimmed every 50 days to ensure that they only ever get the young shoots. The plants are around 125 years old and were planted by the British and are now run by Tata. 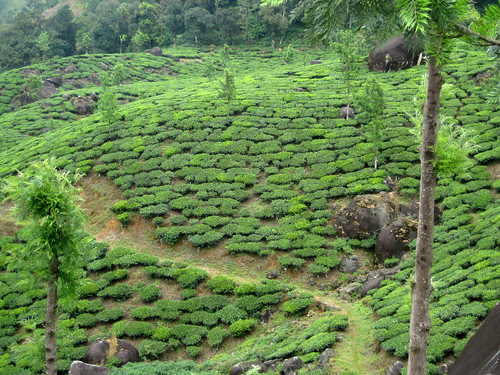 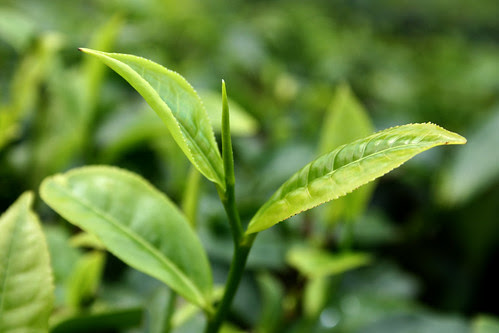 The plants below which look a bit like banana bushes are cardamon. They grow in the shade of other trees with their fragrant pods nestling at the base. We were fascinated to see the juicy pods - whenever we see them in spice packets they are normally shrivelled up and ugly. But these were fresh and attractive. 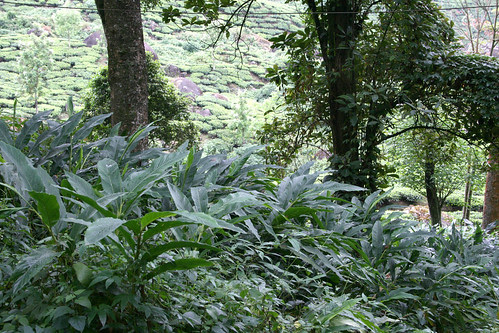 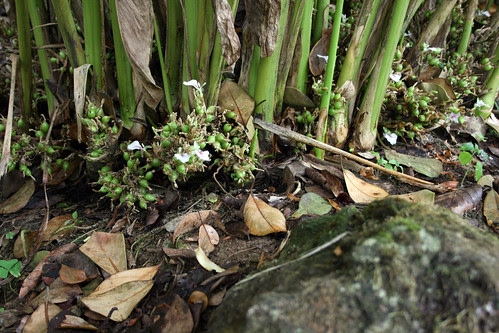 We also stumbled across passion fruit... 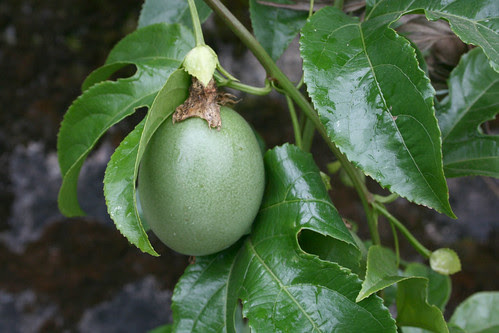 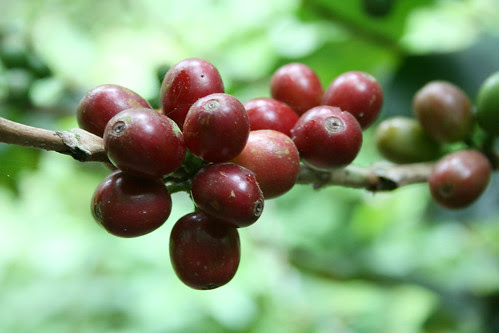 We were amazed at the fact that the plants that we consider exciting and tropical at home just grow carelessly on a mountainside in India... 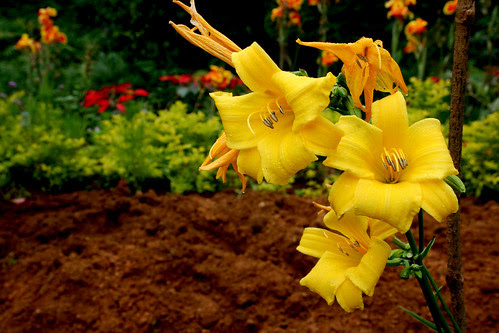 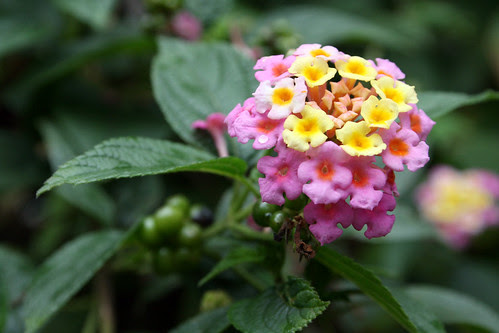 We finished with a cup of cadamon tea before zooming off in a rickshaw to have a look around Munnar. I say zoom. That's far from accurate, given the fact that we were too heavy to go uphill - I had to get out for small stints and then hop back in again when we got moving!

Munnar itself is hardly a tourist playground. There's a bad tea museum and some dodgy cafes. The guidebooks did their best to sound enthusiastic but they failed to mention the fact that Munnar has a brilliant market. We found it by mistake and were amazed by the range and quality of the produce... not to mention how friendly all the traders were... 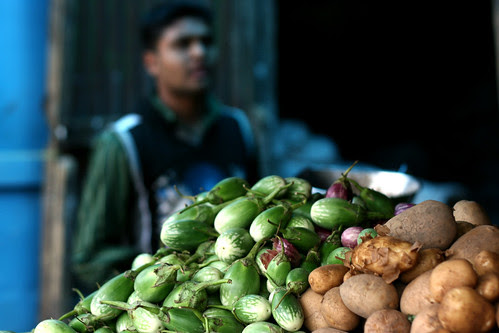 Man lurking behind the aubergines 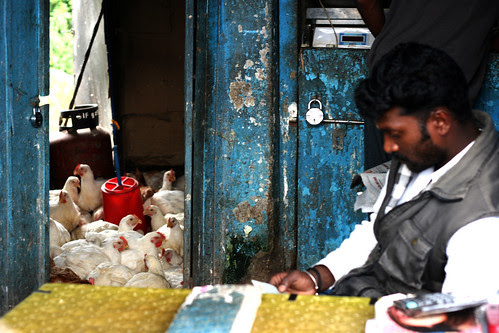 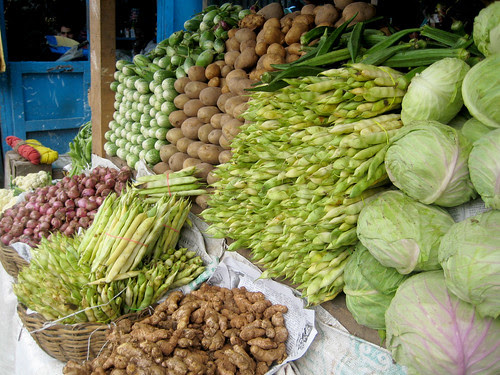 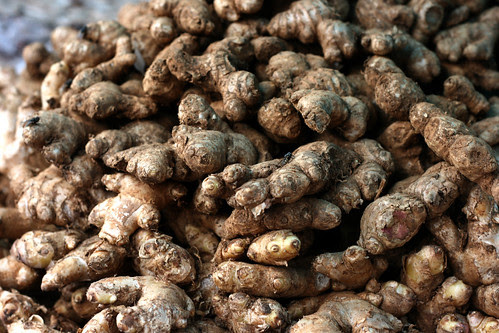 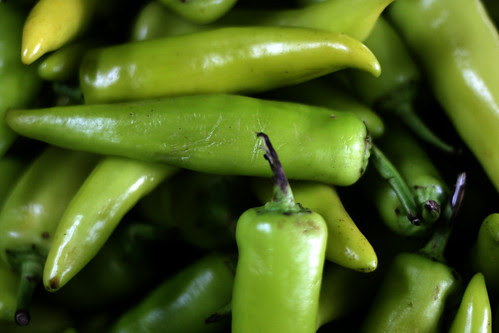 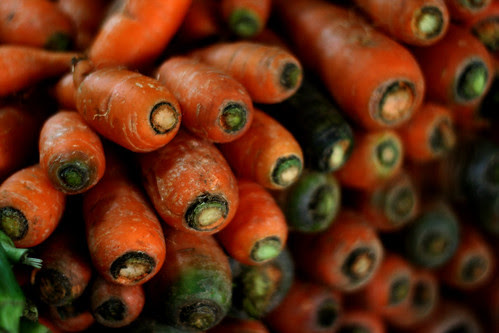 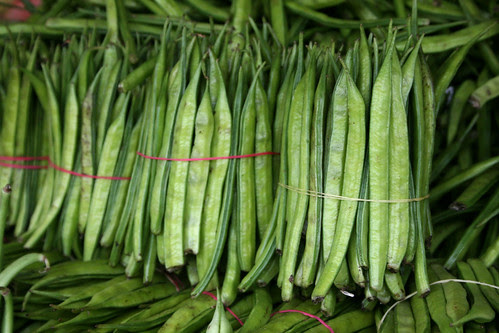 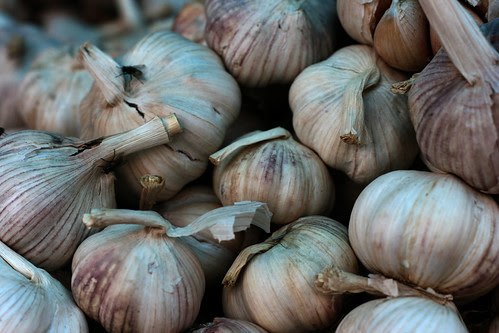 More garlic than a Frenchman's larder 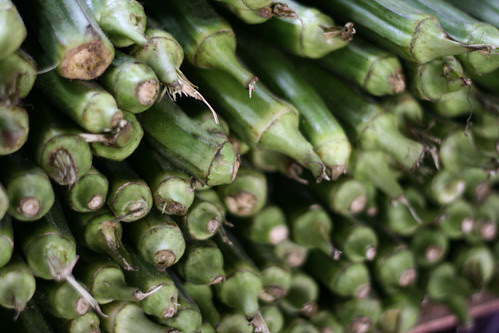 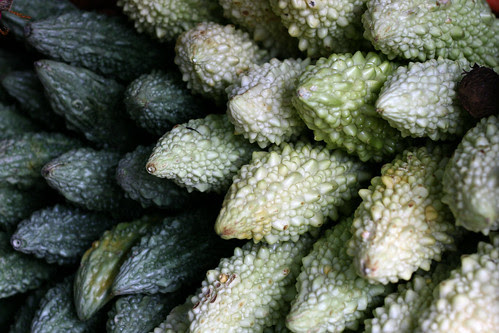 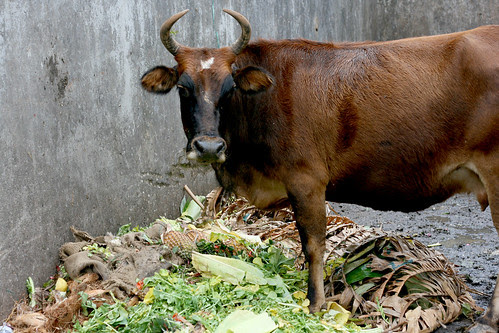 This cow loitered by the exit to the market feasting on the leftovers looking like the happiest cow in the whole world!

We bought as many spices as we could lay our hands on and stocked up on local tea. To our joy we later found out that the goodies we bought in Munnar market were a tenth of the price than they are elsewhere! Smugness is all!

Given the state of the bustimetable below, we decided to spurn the bus for a trip to Alleppey in favour of a taxi which, whilst less fun, ended up transforming our holiday. 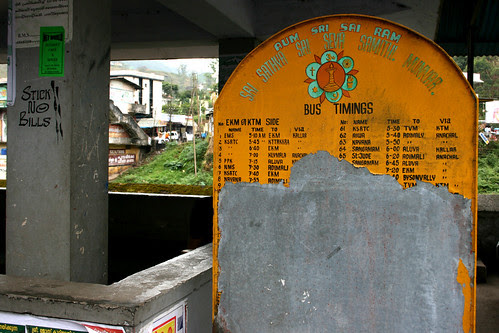 Munnar is a gorgeous place. Relaxed. Idyllic. Tranquil. Green. Verdent. And spectacularly beautiful. If you are spending any time in Kerala please find time to pay this area a visit. And make sure you arrive by bus!

For more information about Munnar have a look on Trip Advisor. We stayed at the Shamrock but wish we'd been able to get into Olive Brook. Both offered free tours of the plantations and cooking lessons.
Posted by Browners at 13:50

I also loved India, but as I was with my family I didn't get to travel around nearly as much as I'd hope for. I think a return visit is a must!

I can't wait to go back. I'm dead keen to go to the north next time.

What a beautiful view!

It was amazing. Not sure you'll find many better views from a hotel balcony.

Glad you liked the pictures Kang. It's a very beautfiul place.

God what an incredible country. I've never been to India but it's high on the list! That really took me on a little holiday while enjoying my morning cuppa - cheers!

Good morning Helen. It was such a great trip. I'm looking forward to catching a moment when I can write up the rest of the trip. There's plenty more to come.

That produce is all so gorgeous, but the Hemerocallis and Lantana? I could smell them just looking at the photos.

Hi Heather, thanks for the comment. My Mum was more excited by the flower photos than anything else! They were just growing wild and looked stunning.

And the market produce was the best I have ever seen. No wonder their food tastes so good.

This is indeed a very beautiful view.