Tucked a safe distance behind Fulham Broadway, is a pub that serves outstanding food, that goes by the name of the Harwood Arms. It's reputation for serving the Capital's finest scotch egg was enough bait to lure me in from South of the river. Lizzie, Chris and Helen tipped me off about these eggy bundles of joy, so I pre-ordered some when I reserved our table. Just to make sure!

From the moment we arrived, we felt at home. The service was slick and the surroundings were smart but relaxed. The Harwood Arms strikes a great balance between creating the warm atmosphere of a pub, but with the overall style and professionalism of a restaurant. The Holy Grail for any gastropub. Given that the mantra of the Harwood Arms is to bring the country to the city it is no wonder that 3 country bumpkins living in London liked it so much!

We tucked into our venison scotch egg like hyenas at Easter who'd given up eating deer Lent. Yolk dripped across my face and slurped over my hands as I failed to put into words just how amazing that moment was. Cowie and my Sister were equally impressed. So much so that I only got a sixth of a Scotch egg! I mopped up the remains with some of the best bread I've gobbled down in ages.

My starter picked up from where the pre-starter had left off. A wooden platter of soft boiled pheasant eggs served on toast with mushrooms had me yelping in appreciation. The crunchy toast and earthy mushrooms were a perfect match. I loved it, but on reflection, it could have done with a bit of sharpness to balance the mellow glossiness. 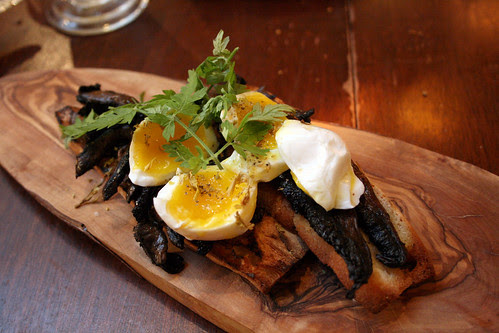 Poached salmon was rudely pink and criminally tasty. Almost ripe with flavour. It was impossibly attractive. 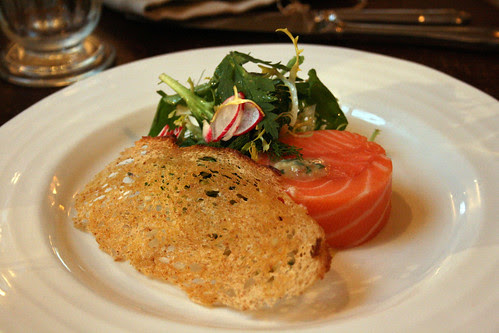 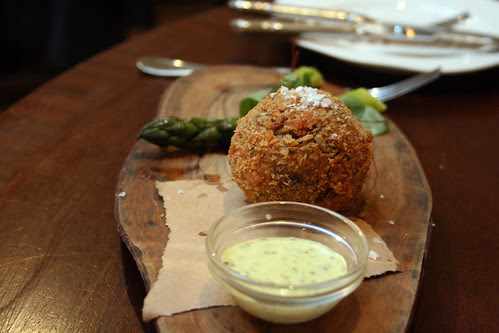 Having wowed us with the starters, we were worried the kitchen would struggle to outdo itself with the mains. But we needn't have been. My grilled deer with bay, garlic potatoes and horseradish and beetroot spread was a dish that I'd happily have every day of the week. The meat was soft, charred and punctuated by the deicate flavour of bay that it had been skewered with. The beetroot and horseradish sauce was so good that Cowie annexed it to go with her cod! Garlic potatoes were upstaged dramatically. 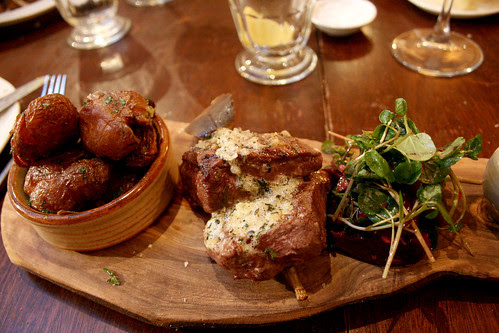 Cowie's cod was delicious. Topped with potted shrimp and some garnished with sea greens it couldn't have been a lot better. But I just hope it was sourced from somewhere that isn't running out of cod. 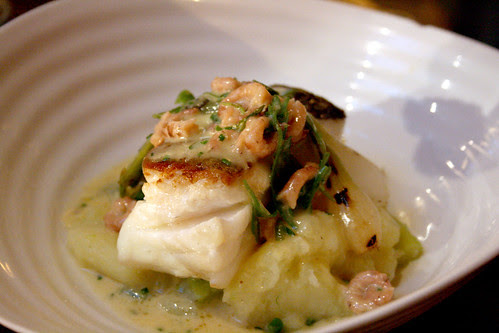 My sister devoured her ray like there was no tomorrow. My little mouthful was far more citrus than I was expecting. Which was no bad thing. The only criticism would be the size of the portion. But then again none of us left feeling hungry and we couldn't find room for dessert! 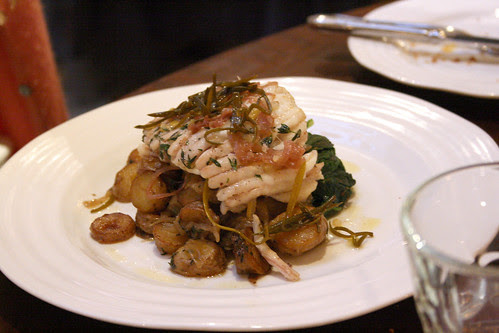 The Harwood Arms is a top class gastropub, serving the sort of menu where you'd happily eat everything on it 7 days a week. The menu doesn't just pay lip service to seasonality and provenance, it genuinely lives and breathes it as you'll see by the way the menu changes when their larder AKA the countryside is having a glut. Look out for signal crayfish hitting their menu soon for instance. When you visit, which you must, just make sure you don't miss out on the scotch eggs. They are worthy of an entire page in the Dorling Kindersley Guide to London.

Brilliant, glad you loved it. I've only eaten the scotch eggs and garlic potatoes so I must go back for a full meal! I also NEED a black pudding scotch egg. We did find them a bit much with the extra pile of salt on top though as the crumbs were salty already but still, delish!

Heh. "We tucked into our venison scotch egg like hyenas at Easter who'd given up eating deer"

Glad you liked it. Like Helen said, we only had the scotch egg and the garlic potatoes, but it also gives us an excuse to go back! Your photos are great.

@Helen - You haven't lived until you've had the black pudding scotch egg. We didn't have any problems with this salt issue you talk of. So maybe they've changed it...

@aforkfulofspaghetti - glad you liked the hyena line. I guess that's what happens when you drink on a school night and then write a blog post!

@Lizzie - I think it's definitely time you went back for the full experience. Why don't you wait until the crayfish are in season. I imagine that will be quite fun.

This place seems to be the talk of twitter and everybody is raving about the scotch eggs - I will need to visit soon, given its so close to my place.

Its on my to eat list for the coming weeks. This and Hawksmoor.

@Kang - you'll love it. And Hawksmoor too. Looking forward to seeing your review.

We're about 10 minutes away from here and still haven't been which is ridiculous. Good tip about the crayfish season, I'll keep my eye out for that.

Perhaps we could get a few of us together as everyone seems keen?

Ginger, I'd be keen to get a group round: I live round the corner too. The place is sheer joy, and those Scotch eggs are some of the best nibbles in London. Great review, Browners, as ever.

I wondered if you were local, Ollie. I thought I spotted you at the meat counter in Waitrose at Fulham Broadway the other day but wasn't sure!

Jonathan - do you know when the crayfish season starts? Would be good to visit when they've got some on the menu.

@Ginger and Oli - let's find out when the crayfish season is and pay them a visit.

Yep, I'm keen for that! Crayfish season is in August apparently.

@Lizzie - Right. Well let's get a few of us together for scotch eggs and crayfish in August. Should be fun.