Celebrating our 5 Year Anniversary in Style at Kock & Vin in Gothenburg, Sweden 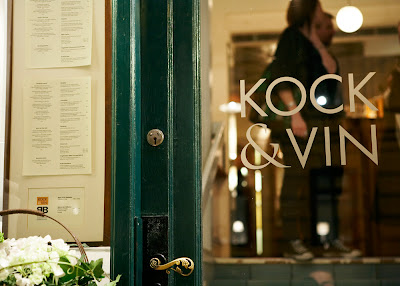 Given that the Fat Duck was the first restaurant Cowie and I went to as a couple, we couldn’t just celebrate our five year anniversary with a dodgy curry or forlorn meatball. Especially with us currently separated by the North Sea. Luckily Gothenburg is blessed with 5 Michelin starred restaurants and a host of others which might get dusted in the future. So we had five restaurants to choose from. But when one is called Kock & Vin the decision, becomes very easy.

Kock & Vin is the flagship in a mini flotilla of first class culinary enterprises run by Björn Persson. It’s ably supported by an informal (Michelin bibbed) restaurant called Familjen and by the brilliant Björn’s Bar which is tucked underneath Kock & Vin. 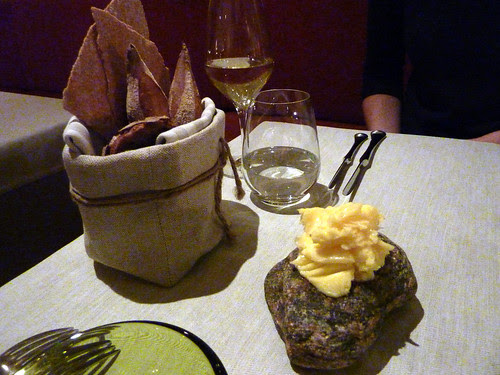 After a glass of champagne in Björn’s Bar we were spirited above deck to our table next to the galley where we were met with a bowl of Swedish bread that was so good it made almost every single floury, yeasty thing I’ve ever eaten seem like a floorboard. And the buttered rock was a charming clash of textures.

We opted for the middle of three tasting menus consisting of 6 courses which was rather pretentiously called Menu of the Senses as opposed to The Journey or Menu Kock & Vin. But this was the only thing that even approached being a criticism for the entire meal. Before we get into the fine details, can I just apologise for the photos which were evilly sabotaged by Earth Hour! 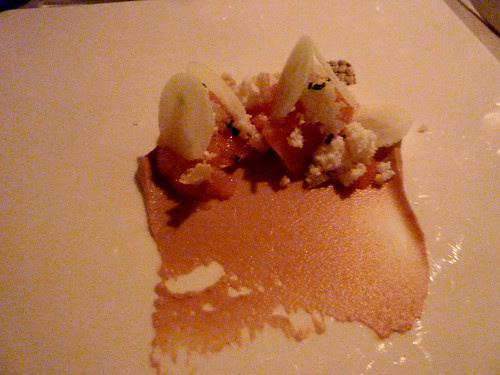 We began with salmon baked in apple juice, crème of roasted cauliflower and bleak roe from Lake Vänern. The tart softness of the apply salmon and sweet earthiness of the cauliflower was an imaginative combination that would have had Greg Wallace scoffing with disbelief and shaking his head like an accountant presented with a budget added up by a hot dog. It not only balanced sweet and sour, but also softness with some shards of crispy salmon skin and a few pops of roe. The acidity of the apple opened up our saliva glands and switched our appetites on.

Seared scallops from Fröya under a shell of horseradish, leek, spinach oil and baked roe was not only a charming spectacle, but also sensational to eat. The dish arrived with a white dome of horseradish ice cream covering the scallop. Our waitress then poured a sensual mussel broth over the dome and it emulsified before our eyes. Every single element was perfect. And if I am ever served a scallop dish as good as this I’ll do a little jig. 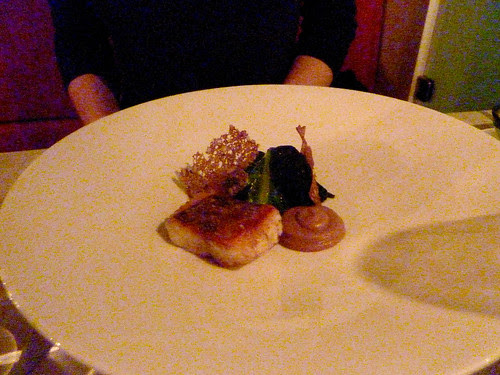 Seared pike-perch with celeriac, red wine, blue cheese from Kvibille and steamed lettuce was wizard like. The textures were blissful and Cowie couldn’t have been any happier. It was as if the chef had given her a brain scan on arrival and developed the perfect dish. 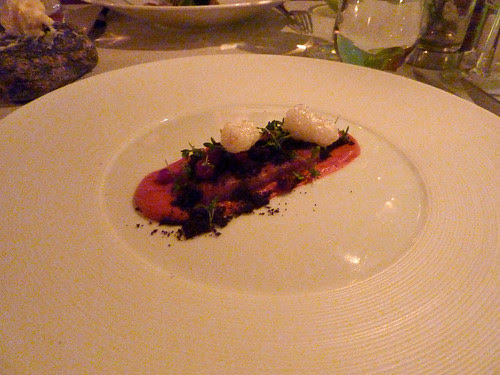 My salted pork belly baked for 12 hours with carrots and lingon-berries was excellent. Two mini puffs of crackling added a textbook crunch whilst the Andrex soft flesh teased apart with a gentle tang of lingon berry. It was at the other end of the spectrum to most pork belly dishes which normally leave you feeling like settling into a solid winter of hibernation. 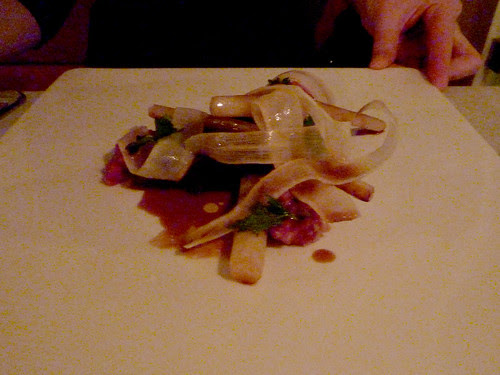 Braised cheek of beef with steak tartar infused with oysters was served with salsify and a sauce made from oxtail. It was the dish that most intrigued me on the menu and didn’t disappoint when it confronted us. The cheek was like a big fat Italian tenor. It boomed with flavour and charmed with it’s graceful presentation. The steak tartar was fascinating. It’s a brave man who first tried to mix an oyster with a raw chopped steak. But it works. Brilliantly. The savoury salinity of the oyster adds interest to the tartar but more importantly gives the cheek an additional note to play with. The oxtail sauce and strands of salsify simply serve to complete a gobsmacking dish. This is the sort of creation that makes going to restaurants exciting. 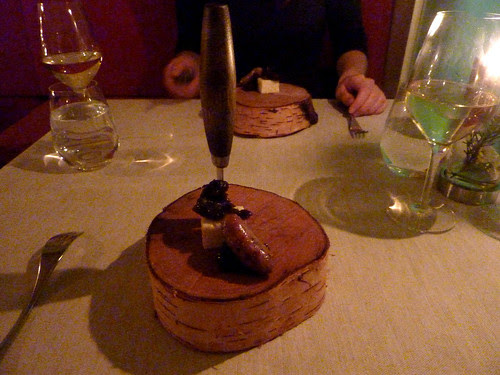 Goats cheese from Lillängen was served with prunes infused in birch tree wine and a little duck sausage. The presentation was striking and in perfect sympathy with the idea unlike other restaurants which simply shove all their food onto wooden boards because it’s trendy. The sausage burst with flavour and created a little spurt of rustic Scandinavian flavour that ended our savoury journey. 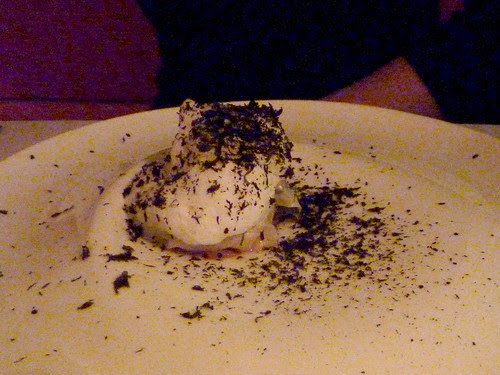 Pear and parsley root with shavings of false truffle (dark chocolate) was served with the most incredible pear ice cream I’ve ever had. No. The best ice cream I’ve ever had. It was so peary it tasted more of pear than any of the pears I’ve gobbled in the past. It was so good we asked how they made it and were simply told that they use cream, sugar, egg yolks and winter pears. We followed this recipe over the weekend in the hope of recreating this wonder dish, but to no avail. It’s just going to have to be one of those memories that Cowie and I lock away and talk about when we get old!

We’ve had some incredible meals over the last five years. But few as fine as this. Cowie claims this is her favourite of all time. And I am finding it very hard to disagree. What an unforgettable experience.

Congrats on 5 years and looks like you celebrated in style (despite Earth hour!)

@Gourmet Chick - Thanks! We had a great meal. And the candle light, whilst bad for photos, was great for romance.

Awww, happy anniversary to you both! What an amazing meal. Your best meal of all time! What a way to celebrate. Looking forward to more tales of Swedish adventures.

Congratulations to you both, mind... you've set the bar very high for your tenth anniversay!

@Helen - Thanks. We had a great time. And I'm looking forward to telling lots of stories about Swedish food. I've done some digging and it seems I'm the only food blogger in Gothenburg, which makes quite a contrast with London.

@Wine Splodge - Many thanks and this is very true. Pizza Express will do just fine!

Aw lovely...what a sweet gourmet couple. When are you going to have little baby gourmets?

@theundergroundrestaurant - Thanks! Babies are hopefully some way off. But they'll be very well fed when they arrive one day.

Happy anniversary, ya crazy kids! :) I'm sort of surprised by the raves about pear ice cream - too often it comes in sorbet form. I must have a taste! :)

@Manggy - We were surprised too. So surprised that we tried to recreate it at home... but we got nowhere near the flavour that they did. I think you might need to get your hands on some pear essence extract if it exists.

this post has made me so incredibly hungry. i reluctantly tried pork belly for the first time this year (my reluctance was based solely on the name) and i loved it!

@Mina - Great to hear you are now a pork belly fan. Love the look of your blog by the way.

Happy Anniversary! I often read your blog but normally 'lurk' without comment. I remember having a fabulous meal at Kock & Vin a couple of years ago on a business trip. Must go back for fun one day.

@Tina - Many, many thanks for the congratulations. And I am delighted to see you have delurked yourself. There's something quite thrilling about a fresh commenter stepping out of the shadows!