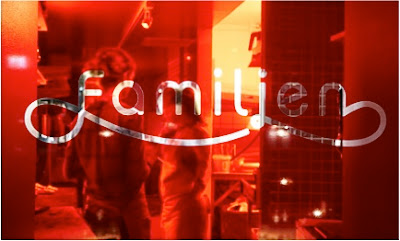 Since arriving in Gothenburg the two most impressive culinary experiences I’ve had have involved Bjorn’s Bar and Kock & Vin. So when my sister showed up I was naturally keen to try the third leg of Björn Persson's milking stool called Familjen (meaning family in English).

Whilst Kock & Vin ticks the Michelin box and Bjorn’s Bar covers off the equivalent of a Swedish tapas bar, Familjen is more of a rustic living-room style restaurant. They serve food with the same flavourful fingerprint, but at a more affordable price and in a setting that you would just as happily switch the telly on or order a cocktail as sit down for a meal.

The menu offers two routes in. If you choose the red pill you get transported into the magical world of an affordable set menu featuring soup, then something slow cooked like belly of pork and finishing with a homely pudding. But if you’re feeling more adventurous and choose the blue pill a universe of small dishes emerges.

Having had a large lunch and keen to avoid the shackles of a set menu, we went for the blue option.

Bleak roe from Lake Vänern with mashed potato, dill, red onion, chives and treacly brown bread croutons was just as stunning to eat as it was to look at. It’s such a simple dish, but a treat to devour when it is served with such artistry. I often struggle with raw red onion, as I find it overpowering, but along with the croutons it added a layer of texture that accentuated the smooth roundness of the mash and fish eggs.

Air dried wild goose breast is now one of my favourite foods. Why have I never had it before? It’s like a super glossy, soft version of top class Spanish or Italian ham. Its rich, regal colour and seams of silky fat are enough to make you want to vow never to eat anything else ever again. The fact that it is served completely devoid of any accoutrements is a sure sign that it’s an awesome product in its own right. Even the best caviar comes with a spoon!

Lamb sausage with a light salad of pine nuts and sharp dressing was as tasty as it was phallic. It was spiced with Moroccan flavours and was essentially a well fed Merguez. To my delight my sister left it almost entirely to me. You’ve got to respect a restaurant that serves a sausage salad with a spurt of creamy white dressing with a straight face.

Their smoked salmon omelette was one of the creamiest things I have ever eaten. I found the crème brule-esque consistency to be too smooth and would have preferred more texture. But you can’t deny it was a very luxurious dish.

I’m disappointed not to have tried more of the menu such as "farm egg from Halland with fried asparagus and black smoked pork belly" and "Helmut Walch´s air dried ham", but see that as a brilliant reason to return as soon as possible. We groaned with wide eyes as pork belly with white bean casserole waltzed past followed by bowl after bowl of upmarket apple crumble laden with custard.

Chances are that if you live in Gothenburg you'll know Familjen already. But if you are visiting Gothenburg for the weekend and are keen to get a feel for the city’s sense of style and cuisine without breaking the bank, then Familjen is the ideal place to go. Everything about the place is gorgeous – from the food, to the staff, to the glammed up diners who look as though they’ve just stepped off an Italian catwalk. Arrive with a good appetite and whatever you do, don’t miss out on the goose.

I do so enjoy your reviews. This one has me salivating before breakfast - which sadly will not now come close to the expectations of my taste buds.

A sausage and creamy sauce moment. Nice. Every time you write Gothenburg, I read Gotham City. Don't know why, not even that keen on Batman.

@Simon - Glad you like the reviews and even better that it got your appetite ready for breakfast.

@Helen - That was slipped in just for you and Chris. Glad you spotted it!


We bumped into your blog and we really liked it - great recipes YUM YUM.
We would like to add it to the Petitchef.com.

We would be delighted if you could add your blog to Petitchef so that our users can, as us,
enjoy your recipes.

Petitchef is a french based Cooking recipes Portal. Several hundred Blogs are already members
and benefit from their exposure on Petitchef.com.

To add your site to the Petitchef family you can use http://en.petitchef.com/?obj=front&action=site_ajout_form or just go to Petitchef.com and click on "Add your site"

@Gourmet Chick - Absolutely. If all they had was the cured goose, I'd be happy.