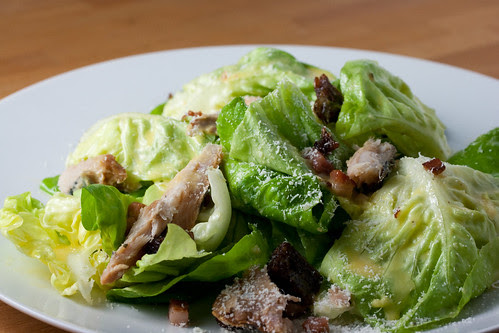 One of the reasons Brits get on so well with Gothenburgers is a shared love of the risible pun. Folk from Gothenburg will chortle with rosy cheeks and mischievous grins when they slip a cheeky double entendre into a punishing business meeting. It’s one of Gothenburg’s defining characteristics and sets it apart (so I am told by locals) from the rest of straight laced Sweden.

Whenever cartoons call for a comic character they always have a Gothenburg accent, whilst the posh protagonist tends to be from Stockholm and the rural dim wit inevitably hails from southern Sweden’s farming region. It seems like every country has their own version of the Englishman, the Irishman and the Scotsman joke.

Another of Gothenburg’s defining characteristics is a love of herring which is called “sill” on the West Coast and “strömming” on Stockholm’s East Coast. So it’s quite fitting that one evening after a long day at work I had the “sill-y” idea of creating a Gothenburg version of the Caesar salad which switched the increasingly overfished anchovy with plentiful herring. To my glee it worked far better than I had imagined and I’ve got a feeling that you could bottle this stuff and sell it up and down the West Coast to pun loving Swedes. So here is my Swedish Caesar Salad – AKA The Swaesar Salad™. I adapted a herring themed caesar salad recipe on Canada’s Food Network website.

Begin by whisking the egg yolks with the garlic, herring and lemon. Then add the salt and pepper. Then, as if making mayonnaise pour in the oil, in a thin, slow stream. Whisk as you go until it thickens. Taste for seasoning. It will be quite salty from the herring so don’t go mad on the white stuff. Plus you are going to add salty bacon and cheese. Put the dressing in the fridge and then when you are feeling hungry assemble your salad.

To do this cut the flappy leaves away from the lettuce and concentrate on the crunchy leaves in the centre. Give them a wash and then fry your lardons in a heavy bottomed pan along with the cubes of pumpernickel. This won’t take very long. The chocolaty brown bread will add some sweetness and crunch to the salad and give it a much more interesting flavour than the normal white bread croutons.

Dress the leaves with the Swaesar™ sauce in a large bowl and then grate the hard sheep’s cheese on top. If you can’t find a suitable Swedish cheese then Parmesan or Pecorino will do. Add the lardons, pumpernickel and chunks of bokling and tuck in.

It’s not very Swedish to speak about yourself let alone your own achievements, but I’m very proud to say that this is one of my favourite creations to date. The sauce tasted authentically like Caesar dressing but with a noticeable Swedish flavour of subtle herring which arguably makes it even more savoury than the classic dish. The pumpernickel along with the lardons does a great job of giving the dish a sweeter note that stands up to the more savoury aspect. The böckling’s smokiness then gives the whole plate an extra level of sophistication. 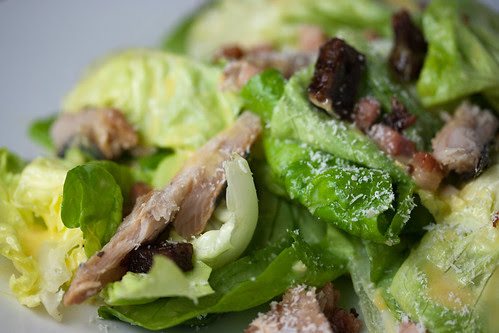 A genius idea - must give this a go.

I'm always looking for new salad recipes, will have to give this a try!

Love the idea of herring with Caesar salad

@gastrogeek - Thanks. Let me know how it goes.

@stolls - Hope it works out for you.

@Gourmet Chick - It's all about the herring.

This looks absolutely amazing. Caesar salad is one of my favorite ones, and by adding the herring it definitely makes it a lot better. Thanks for sharing such a great recipe.