Cowie and I are equally obsessed with food. I guess it's a shared passion. We land up going on holidays based around an oyster festival, a place having a great reputation for langoustines, an awesome market. I doubt we'd go on holiday to a place that didn't have good food, or the very least an interesting culinary adventure to be had.

Valentine's Day is probably the busiest night of the year for the restaurant industry. I landed up having a chat with the head waiter at the Galvin in the afternoon over a cup of coffee and a chat about his cognacs - they had been fully booked for 5 months and had to completely transform the restaurant layout so that it could accommodate a school classroom style arrangement of tables for 2. They keep their menu very staightforward and offer amuse bouches and little petit fours and going away presents for the ladies. All lovely touches. Cowie and I tend to shun the cliched visit to an intimate restaurant for Valentine's day. Far better to avoid the en masse romance and cook something intimate and romantic at home.

So we went to Roka on the 13th which was amazing, and then pottered back to Cowie's to cook some cod and have some fun with some souffles for Valentine's Day.

I took charge of the cod, wrapping it in top quality bacon and seasoning it generously with Cowie's speciality salt and pepper. A splash of flat champagne from last week and 2 sprigs of bright red tomatoes from M&S finished it off before it went into a medium oven to work its magic.

In the meantime I did what I always land up doing with peppers. I cut them in half and blackened them on in the gas flame until they blistered and became stunningly smokey.

Cowie suggested a cheeky little tomato sauce might not be such a bad idea - so I grabbed the left over bruchetta spread that Blades and Heather brought to our pancake party, added some shallots and tinned tomatoes and simmed it down to a rich deep tomato sauce to accompany the cod. Cowie popped in a few prawns, I removed the beautifully cooked cod from the oven and then we swooned over our creation. Gorgeous. 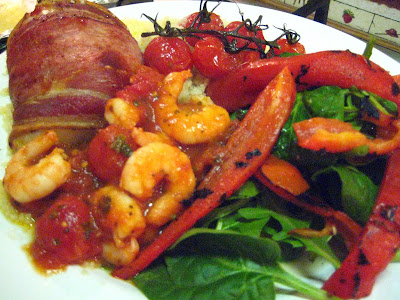 Cowie took charge of dessert. She delved into our souffle book and rustled up what should have been a mango number but landed up tasting delicious but quite plain. They rose perfectly and held their shape well. There's something really nerve racking about the 10 mintutes that souffles take to transform in the oven. Are they going to rise? Are they going to flop? Have I remembered to butter and sugar the ramekins? Should I check them? Will they collapse once they are taken out of the oven? 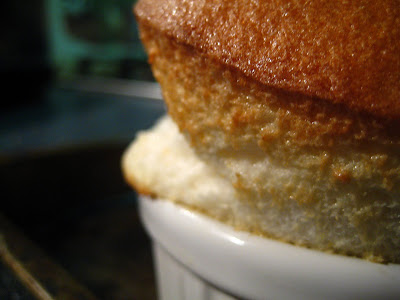 You can tell from the pictures that Cowie did a great job. We're giving them another go tonight, so stay tuned. I think it's going to be apricots and honey this time.
Posted by Browners at 18:57

Your Valentines feast looks amazing - shame we weren't invited ;) And congrats to Cowie on doing such a fine job with the souffles.