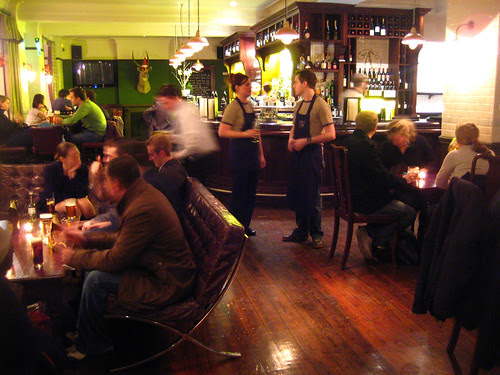 Nearly. So very nearly. But not quite.

Being the proud Balhamites that we are, we greeted the glitzy arrival of The Avalon to the hungry shores of Balham with great expectations. Having witnessed at first hand what the triumvirate of owners (Tom Peake, Mark Reynolds and Nick Fox) can do with a disgusting wreck like the Stonhouse we were keen to see what they would do with a much more salubrious starting point.

To date The Avalon has been reviewed favourably by the London Restaurant Review , The Metro and The London Paper, as you will see on their site. But with less enthusiasm by The Independent and The Telegraph which understandably you won't see on their site. All reviewers had visited with high hopes but had left feeling frustrated. Our experience didn't buck this trend.

We took advantage of their 50% offer through TopTable, just as we had with The Stonhouse, and visited on a bleak mid February Monday, expecting to be some of the only diners. We used to know The George well. It was the sort of pub you slip into for a spot of sport watching or to win their pub quiz. But not much more. It was badly decorated and tired. The Avalon, in contrast, is dazzling and smartly tiled by a designer with a keen eye. But once you see through the smoke and mirrors of the Lawrence Llewelyn-Bowen effect you suddenly remember you are sat in the far corner where you used to get smashed in the pub quiz. Whilst the walls and ceiling are lovely, the budget clearly hadn't stretched to the floor which has been covered in a textured lino. But fuck the literal highs and lows of the decor. We were here for their half priced food!

By sheer chance we were seated next door to Cowie's wonderful sister, Victoria, who was on an impromptu night out with two of her friends. This brilliantly gave us a sample of 5 meals rather than 2 to base our review on.

Things started well. Cowie's venison carpaccio was a work of genius. Deep purple and richly gamey. It was a stunning dish that we are keen to copy at home. It had Cowie beaming with joy as she realsed I was wallowing in a pit of food envy.

My crab and chili linguine wasn't as good. It arrived, redolent with potential. But the kitchen had decided not to season it. And not to bother with a squeeze of lemon either. I had a word with the waitress who very swiftly brought me a lemon so I could rectify things. With the acidic lift of the lemon and some salt and pepper the dish became a joy. But this isn't how to do things! I suggested my tweaks to the waitress who took them on board and pointed out that we were the first group to try their new menu.

Steaks are a speciality of the Avalon. Or so they claim. But I've heard mixed reviews about them. Some say they are phenomenal. But a number of friends in the area have been so disappointed they've had them knocked off their bill. So my decision was easy. My medium rare rib eye steak was more medium well than rare. But in fairness it was a fantastic piece of meat that just needed less cooking and more seasoning. However, it played second fiddle to the most divine bernaise sauce I've ever had the honour of dipping a piece of marbled steak into. Smooth, glossy, slightly sharp and spiked with tarragon, it was worthy of the Saatchi Gallery as a work of art.

The chips were excellent. Thin and crispy. Another excellent medium for the bernaise sauce that sat there looking at me. Inviting me to lick it out and ask for another. Less good was the spinach. It took us a while to work out what was wrong with it. And then I realised because I've done the same thing myself. The water had boiled dry which made it taste slightly acrid. Not good.

Cowie was delighted with her sea bass that had been roasted with fennel and tomatoes. It smelled gorgeous and flaked away just as it should. This was yet another example of the heights that The Avalon's Kitchen is capable of.

Mulling over our meal with our chums on on our right and adding in the nuggets we picked up from the disgruntled strangers to our we were slightly underwhelmed. It was a very mixed bag. Cowie had enjoyed two exceptionally good courses. I had almost exploded with joy at the bernaise sauce, but was riddled with irritation at the number of basic errors that we'd encountered. Victoria's table had done worse than us. Their steak had been flabby and overcooked. And the waitress had forced them to have extra mashed potato with a lamb shank that already came with mash. Worse still, the bananas in the banana crumble were still hard. The table to our left felt aggrieved that you have to order extra vegetables, but this, whilst annoying, is pretty standard these days.

Allowing for the fact that this was a brand new menu and was half price it was still not quite up to scratch. With Marez Loukal (previously of Chez Bruce and Quaglino's) at the helm, the food shouldn't be punctuated with the sort of schoolboy errors we encountered.

That said we will be back. But we'll probably wait until they have ironed their glitches out. Or, if they decide to send out some special offer vouchers to the good people of Balham we'll be there to give it another bash. The Avalon is capable of great things, so we are looking forward to it maturing into a restaurant to make Balham proud. After-all, with bernaise sauce as pornographic as this, it's going to be hard not to return every night!

Is this the place that used to do the really huge Sunday lunches?

I need to revisit this place and give it another chance. I went about 6 weeks ago and had the worst beef and stout pie I've ever had though...

This place is new. But during its life as The George it may well have done. But I'm not sure.

Sorry to hear your steak and ale pie was soggy. I'm planning to give their pie a test drive with their £10 for a pie and pint offer. Then we can compare notes.

Wow! Very up and down then. There are lots of places I want to visit in Balham but I will move this right down the list. It's great that the bernaise is divine but then what's the point if they can't cook a steak properly?

I am sure there is a blindingly good restaurant in here somewhere. I've got great faith that it will improve and reach its potential. Luckily for them they seem to be full the whole time.

I'm returning next week to try their pie and a pint for a tenner promotion out. Let's see what happens...

Frustrating, isn't it, when a place is only patchily good. Why can't they just get it ALL right? Is it really so hard?

BTW, after several v enjoyable trips to Gazette, they completely c*cked up for us the other week. We had the worst-cooked steaks I've ever had. One was not medium-rare, but raw inside. The other one defies description. The manager had no explanation and we weren't asked to pay. Shocking.

It's so annoying. Very sorry to hear that Gazette screwed up. They are normally very good.

That said, I've got hope for The Avalon. I've got a feeling they will improve.