If you are looking for a rowdy, raucous and rambunctious place for a birthday party look no further than the legendary Tiroler Hut. Its policy of allowing diners to swap any dish on their £25, 3 course menu, for a shot of schnapps says everything you need to know.

Having not heard of The Tiroler Hut before we visited for a friend’s birthday party I mentioned it to a few friends. Most stared blankly. The ones who had been giggled nervously as foggy memories of a heinously debauched night came flooding back to them.

Unusually, we arrived not only early, but first which gave us time to settle into the cabin like underground bar area. The entrance is discrete, a bit like how I imagine a brothel’s entrance might look like. And you walk gingerly down a well-trodden staircase into a subterranean bunker. Having not yet entered into the spirit we sipped our gin and tonics and practiced our German, ja. Or is it ya?

Once our party had arrived we switched to enormous steins of lager which are little short of being my mortal enemy. Not being able to burp in normal situations isn’t really an issue. But when you’re wolfing down litres of beer it becomes a life threatening disability!

In a jolly mood we took up our position at the centre of the dining area on a long table overlooking what later turned out to be a stage/dance floor. I can safely say that the menu must be most girls’ idea of hell. It’s rammed full of sausages, meat, fondues, battered this, deep-fried that and puddings that compete to have the highest energy density statistics.

Most of the lads by-passed starter opting instead for a liquid livener. I regretted taking the direct route through the centre of town with my just defrosted prawn cocktail. But at least it gave me some fishy ballast. The girls clubbed together and ordered for each other which resulted in them all being served a single sausage garnished with half a cherry tomato and a quarter of a lettuce leaf. The presentation of the slightly curved sausage as a smiley face was a work of genius. Apparently the sausages were delicious. Others had platters of cured meats which sadly weren’t made into smiley faces. 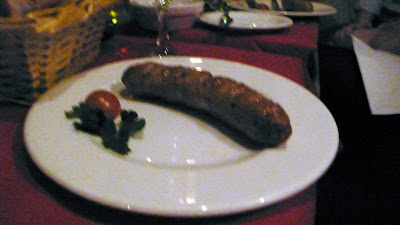 Next up the girls were all served a platter of 4 sausages each! Rich. Oozing with garlicky fat. And o so phallically presented! As the booze started to wreak its merry havoc the sillyness kicked in. If you want to have a laugh serve girls a shit load of booze, and then a platter of kinky sausages. And then observe. Luckily, the sheer quantity of sausage was too much for the girls and the boys greedily scavenged the delicious, if slightly seedy leftovers. 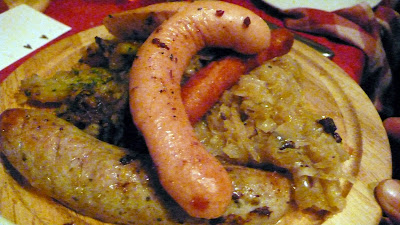 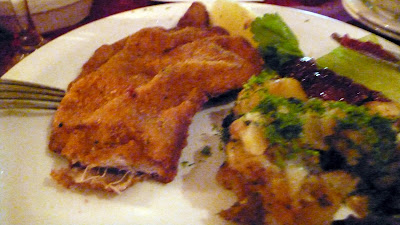 I had a pork schnitzel that is still repeating on me 3 weeks later. With the appearance of cardboard it just compounded my inability to burp! My telescopic fork allowed me to sample a smidgen of tepid goulash whichwas actually pretty good, if you don’t mind a bit of gristle. My apple strudel left me concerned for the welfare of Australia as the legs of my chair started to buckle as I tucked in.

I only wrote about the food because it’s fun to take the piss. The whole point of the Tiroler Hut is the boozey, eccentric atmosphere that has made it one of the best places in London to have a party for the last 40 years.

Half way through our meal we were treated to a rousing arpeggio by the, lederhosen clad, owner on the bells! Gobsmacked by his musical talents several diners were invited to join in the cacophony.

By the end of the evening several other diners had belted out some impressive renditions of Eton John and Elvis tracks. And some not so well. There was dancing. There were speeches. And more importantly there were smiles, laughter, grins and split sides by the stein load.

Happy Birthday Jen. I can’t wait for your next party. Have a look at the belltastic video below to get a feel for what I've been wittering about.

Thank you Rad for the photos and video.

Did someone say fondue? Oh my god! I've been craving one for weeks.

I'm surprised by how many people I know now that can't burp. I saw a friend down a pint of beer for it to make a spectacular reappearance when he couldn't burp properly.

It's a serious disability. I even found an online support group.

Their fondue seemed fine. Get involved. But make sure you're wearing your drinking shoes.

How funny, it's impossible to look at those pictures without smiling!

Have you even been to Bunker in Covent Garden? I was there for work drinks a while ago and somebody ordered food for the group to share. It turned out to be a single sausage, balaced precarioulsy atop a pile of mashed potatoes, looking not unlike the photographs you posted. Cue laughter all round and a complete inability to eat said sausage.

It's such a funny/fun place. Is there a funnier foodstuff than sausages?

Will go in search of Bunker in CG. Sounds fun.

Lovely to meet you both last night - those sausages look exactly as you described!

Great to meet you too Gourmet Chick. I always find it amazing meeting up with people I've met online. Hope your Mum doesn't get cross about you meeting strange internet people.

I have always been curious about this place, although I haven't been. I suppose you don't really go for the food but for the atmosphere.

Their sausages were so pornosexual. Very disturbing indeed. This is a place you come to for a party.

I came here for hen night (not mine I hasten to add) and it was hardcore.

The schnapps substitue thing? We weren't allowed to subsitute and ate all the courses AND schnapps inbetween, like a boozy amuse-bouche.

The old man on the accordian (or keyboard - hell, it was some sort of instrument) kept kissing the bride while they had a sing-song. Curiouser and curiouser.

Glad to find someone else who has experienced this place at its messiest! I'm looking forward to a return trip for a suitable event!