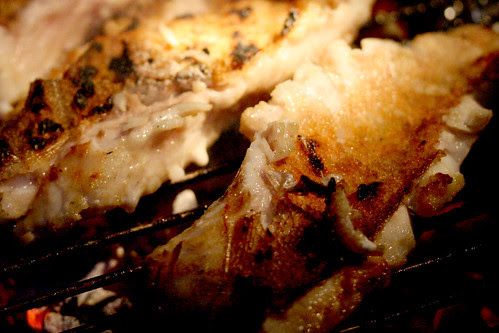 This isn’t much of a looker. So I’m sorry. But, considering the pitch black conditions it is a miracle we’ve got a photo at all. The light is from a head torch. This is a story, albeit a short one, about how to BBQ fish.

Our fishmonger from behind the Cob at Lyme Regis steered us away from the usual suspects such as mackerel, sea bass, and cod and into the unchartered waters of red bream. He dissuaded us from buying a variety of more expensive and exotic fish on the grounds that this was the freshest thing he had and wanted us to have it.

On arrival back at our camp site we landed up having to beg a few lit coals from a neighbouring group who turned out to be raving psychopaths. Having refused us any of their fire they then relented and tried to befriend us with offerings of horrific rabbit stew that couldn’t have been tougher if it had been sporting knuckle dusters and full facial tattoos.

With our fire alit I then scaled the fish and then coated it in seasoned flour to protect the flesh. We then put a handful of new potatoes in a foil parcel and sprinkled them with olive oil, salt, pepper and rosemary. Once we’d devoured our scallops and groaned at the hazelnut butter we then set about grilling our fish.

To BBQ fish you have to be on your guard at all times. Like a spy deep inside enemy territory. It cooks very quickly and has a tendency to get stuck to the bars. So be armed with 2 spatulas, expert reflexes and a head torch.

Lightly oil the bars on your grill. Then place the fish skin down over indirect heat. The temperature should be hot enough for the skin to immediately make a sizzling noise. After a few minutes inspect the fish and use a finger to check if the skin in crisp or burning. If it feels crisp then it is time for the big moment. The flip.

Using both spatulas jab the fish from the side and in one motion turn the fish so that the skin is facing up. Then cook for a minute or so longer and you will be rewarded with flaking fish and crispy fish skin which are two of my all time favourite things.

Serve with char grilled aubergines, peppers and tomatoes and roasted new potatoes.
Posted by Browners at 11:01

I do hope we're going to hear more about these raving psychopaths...!

I;m not sure I've had red bream before, but it's refreshing to hear the fishmonger encouraging you to go for the freshest, rather than the most expensive.

@Lizzie - Raving psychopaths were nuts. They spent all night with their shotguns and air rifles picking off rabbits and squirrels and then cooking them really badly the next day!

If you're ever down in Dorset pay the fishmonger in Lyme Regis a visit. It's such a nice spot. He was busy training his apprentice which was nice. The lad was about 17 and loves fishing so much that he wants to e a fishmonger.