With Day of the Dead upon us, what better thing to write about than my first ever attempt at cooking a mole. Those of you who still have nightmares about us eating ortolan, hare and squirrel needn’t duck behind the sofa. No. I’m talking about the Mexican sauce that is richly flavoured with chocolate and an array of chillies.

I had a look on Wikipedia to try to get my head around what a mole is. Apparently, “Mole can be best defined as a very thick, homogeneous sauce with complex flavors. This distinguishes it from most Mexican salsas which are watery, often raw, and contain fewer ingredients (usually nothing more than tomato, onion, garlic and chili pepper) in still-identifiable chunks.”

Naively I thought that mole was a dish in its own right. But it isn’t. Rather it’s a sauce that you use to pour over chicken, or use to smother an enchilada in. There are numerous regional versions with the most famous being from Puebla and almost as many stories and myths about where the concoction first originated. My favourite features a particularly well timed gust of wind. But sadly, none involve little mammals that burrow underground

Here’s how to make Mole Poblano


Pop the onion in the oven along with garlic and tomatoes and give it a good roasting until the skin has begun to char. Set this aside and concentrate on the other stuff.

Skin and bone the chicken thighs. Reserve the lovely meat. Then make a proper stock from the chicken wings, thigh bones and skin. After an hour or two strain the liquid. Once cooled pick through the solids and salvage the meat from the wings – as you’ll add this to the mole later.

Grab your dried chillies and simmer them until they are soft. This dish depends on the correct layering of chilli flavours so you’ve got to get your hands on the right ones. All three types are important but it’s the chipotle that will make or break it. I’ve managed to find dried ancho, habanero and chipotle chillies in Brixton’s Tesco. (But if you don’t have such a fantastically stocked supermarket have a look at South Devon Chilli Company’s website.)Then, once they have softened put them to one side and move on to the nuts.

Fry the nuts in oil or lard to release their flavours. You want them to caramelise slightly and become super nutty. Remove them and add in the prunes and raisins so the kitchen starts to smell of a melting Fruit and Nut bar. Then fry the tortillas.

Fry the sesame seeds and then do the same with the allspice, cloves, star anise and cinnamon. Then make this into a paste using a spice grinder. By this time your kitchen should look like the Helmand Province.

Now amalgamate the softened chillies, fried fruit and nuts into a bowl, add some liquid and blitz. Then combine everything together and fry in a large pan for 5 minutes over a strong flame.

Then tip all of this into your slow cooker and add the roasted tomatoes, onions and garlic, 2 litres of chicken stock, the chicken thighs and wing meat, a bar of dark chocolate a handful or oregano, a few spoons of Demerara sugar and a sprinkling of salt and pepper. 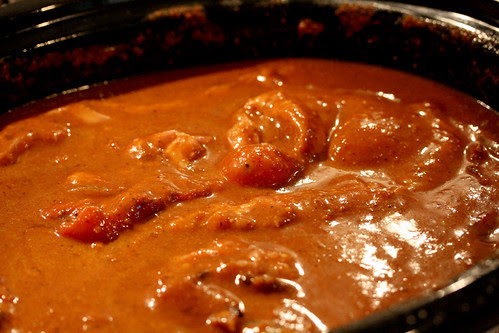 Allow this to bubble away for 5 hours or so. The finished mole is best left to mature overnight and then reheated the next day. 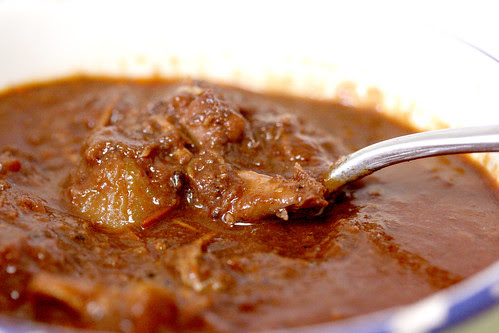 The mole went down a storm at Cowie’s birthday party. No-one had tried it before, let alone made it. So they had nothing to compare it to. The chicken was moist and tender. And the spicing was fantastic. Although it was rammed for of chilli, the flavours were all layered. The chipotle gave it a smoky side, the ancho gave it a fruity dimension and the habanero delivered heat. The chocolate gave it a rich, dark sheen and the nuts and tortilla added thickness.

If you’ve got a spare Sunday and are keen to make a mess of your kitchen, then making a mole couldn’t be more ideal. You can freeze it and use it in countless way. I’ve now got the mole bug and am keen to learn more about how to cook Mexican food and use chillies properly.
Posted by Browners at 10:45

I love mole, although I've never been brave enough to make it myself yet, looks like a pretty hardcore project!

We cooked this a couple of years ago, I've just looked back at the post to see which recipe we followed but I didn't include it.

I remember being unimpressed with our version though which might be due to not having all the varieties of chilli we needed. We managed to find some great chillies at Borough market and Whole Foods so I'd like to give this another go, it does take a while though, as you said!

@Jenny - It took quite a lot of effort but was definitely worth it. But be warned once you've given it a go you might well get hooked.

@Kerri - It's the chillies which make the difference. If you can get your hands on the right variety it makes a huge difference. I'm sure you must be able to get them all online...

I need to make this. I was getting progressively more excited at the prospect until I got to, "tip it all into your slow cooker." I don't have a slow cooker :( Could I just simmer for longer on the stove?

@Helen - Ah. I always forget that not everyone has a Stewie Griffin as I call him, or "Slo Co" as a more glamourous friend does. Of course you can just go for the slow simmer. Just treat it as a casserole/stew and you can't go too far wrong. V. tasty.