If you read regularly you'll know that my Mum is an expert in the world of edible flowers. She's even started a blog to go with her garden website. 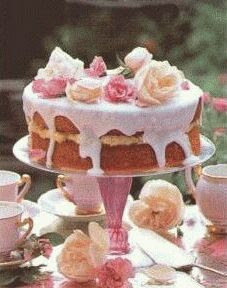 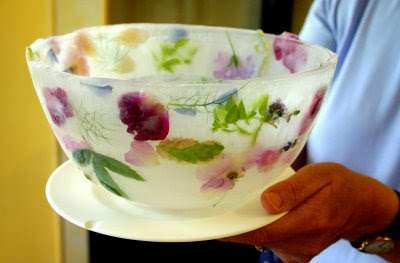 A while ago Charles Campion referred to Mum's book on Edible Flowers as being the seminal book on the subject. This was in an article about how London's restaurants jazz up their menus with edible flowers for Chelsea. I wanted to find a special restaurant for us to go to for Mum's birthday...

I tracked back through the article and found Roussillon. I'd wanted to go there for a while - ever since Oli went about a year ago. So I emailed Alexis Gaultier the chef and asked very nicely whether they would be able to feed us with edible flowers. To my shock Alexis replied almost immediately saying how excited he was to prepare such a meal for us.

We arrived and were treated like a family of Gods. The rest of the evening was incredibly special. Alexis came to visit us at the end of the meal - we were very privileged indeed because he doesn't always man the stoves himself!

We weren't given a menu (until the very end). Instead Alexis had prepared a special menu just for us that featured a different flower for each course. We didn't know how many courses were in store and weren't allowed to order any wine because they had a unique wine in store to match the floral qualities of each dish. All the waiters had been told not to share the chef's secrets until the end of the meal. So essentially we were completely in their hands.

After a glass of champange and a few amuse bouches of raw scallop and chips made from chickpeas we started on our voyage...

A jellied broth with summer vegetables appeared first. Tasting like a cold roast lamb sandwich it played second fiddle to a floral wine that tasted and smelled like drinking in roses. Like almost all of the fabulous wines it was from the Roussillon region. We failed to pick out the presence of green tea which cost us a rare black mark.

The next course was one of my favourites. (You know your having a good time when you get to write a sentence like that one!) A solitary langoustine had been deshelled and tossed in sesame seeds and placed precisely next to a tempura cougette flower. As Mum pointed out the beauty of cougette flowers isn't for their taste but for their silky texture which was drawn out by the crispy batter. Very clever stuff. The relatively blandness of the cougette flower was contrasted by the full bodied flavour of the deeply fishy langoustine. A wonderful dish that was matched by my favourite wine of the evening. It tasted like an oilier, more fragrant version of a Mersault but was from Roussillon. I am hoping to find out what it was.

So far we were very impressed. Then came Cowie's favourite dish. A tranche of white fish that we thought could have been cod, haddock or halibut steamed and topped with what tasted like lightly smoked tofu. Mum yet again identified the flower correctly. This time it was borrage. Rather than use the flowers Alexis had salted the buds and used them like capers. They burst with flavour. We didn't manage to identify the green sauce as being chlorophyl jus, so you'll have to let us off. Neither did we manage to detect the lapsang souchong tea that had smoked the fish. Although on reflection the tofu wasn't smoked so that was what we were tasting. The dish was a complete triumph. The textures were, once more, very clever. The delicate tofu enhancing the softness of the fish. Given the bolder flavours in this dish the sommelier paired our halibut with a glorious red burgundy that was light and bouncy. Another triumph. This was the only wine to not come from Roussillon.

Our next course was Dad's favourite. A few small lumps of veal served pink, with roasted tomatoes and minted potatoes. Very subtle. I can't remember what the flowers were in this dish exactly. But whatever they were Mum guessed them! I was probably distracted because the wine was so good. A rich, dark, looming red from Roussillon. It had no teeth and was like compote on the palette. Gorgeous.

The next dish started to signal the meal beginning to wind down. I love goats' cheese. So the tomato veloute with goats cheese was delicious. Sweet and salty notes loved each other. Thyme flowers were the star of the show here. This dish was paired, if my now slightly squiffy brain remembers rightly, with a glass of sweet white Roussillon - which for all the world tasted like a petal infused glass of d'yquem.

After the cheese we were served a beautfiul plate of watermellon carpaccio topped with some pretty flowers. Cooling and refreshing this tasted gorgeous with the intriging alternative to dessert wine they poured out like nectar.

At this stage it should have been all over. But the Maitre D' had overheard Suzy, my sister, complain about the lack of chocolate from seriously long range. So along came a special course of dense chocolate with some gold leaf which was washed down with what I can only describe as single estate fortified cider from Normandy. What a meal!

But it wasn't over. Alexis and Michael came over to talk us through our experience and gave us each a personalised menu to commemorate the special occassion. Mum and Alexis exchanged floral stories and techniques for cooking flowers. And we even landed up inviting Alexis over to our house for dinner. So Mum and I had better get our edible flower cooker hats on!

As a leaving gift the girls were given a sweet box of macaroons to take home, whilst Dad was left with a huge bill and I was left feeling very guilty for haivng organised it all. That said it was one of the most memorable meals of my life and is something that the Brown family will talk about for many years to come. I have no doubt that my son will do the same to me one day. Sorry Dad! But thanks for a fantastic evening.
Posted by Browners at 20:45

It certainly is. It does mean that we hardly have any rose flowers left in the garden though!

Edible flowers sound really interesting. I will have to keep an eye out for some.

Hi Kevin, they are really interesting and are becoming increasingly fashionable over here in the UK.

What a brilliant write-up. That really is fantastic service - how kind, thoughtful and hospitable of them to organise that special menu for your mum. I'm going to get myself down to Roussilon, pronto.

@Ollie - You must go. It's a fantastic restaurant with proper food, proper service and proper wine. You'll love it.