Kimber's Steak on the Fire

Cowie has raved about how she grew up cooking mammoth steaks on their family's open fire... Given that Agas are terrible for cooking steak properly, this is a great idea for many country houses. Steaks cooked on our Aga tend to go from being raw to grey - somehow they completely bypass the lovely medium rare stage that is the Holy Grail of the edible bovine world.

I've been badgering Cowie to have "fire cooked steaks" for months now. And finally she gave in! Success... It just goes to show that nagging isn't just for girls. It works on them too. It just takes patience. I had to set a weekly alarm to go off just to be safe.

So off we went to Kimber's farm shop for a special trip... It's one of the joys of spending the weekend in Somerset. To break free from London and indulge in life as it should be. We parked in the farm yard and breathed in the deep, sweet, intoxicating smell of cowshit. It's without doubt one of Cowie's favourite smells. And is the hallmark of a top quality purveyor of meat. Maybe Moens and Dove's should start pumping out pooey smells to attract customers like supermarkets do with the smell of bread.

All of Kimber's meat is of the highest quality. I couldn't help myself from touching everything. I stroked a turkey and almost cuddled a bristly pork belly. My eyes were transfixed by the way that geese have naturally pre-scored skin that is geometrically perfect. Their duck breasts were vast - about the size of my face. Duck hearts, pig's tongues, liver, kidneys, snouts and trotters were proudly on display next to prime cuts of meat. Tamsyn (Cowie's mum) and I got very excited about their faggots... which are made from lungs, kidney, heart and liver. They've tried making them without lungs in the past but they are too dense. You need the lungs to add the lightness that makes faggots so special. Cowie wasn't so impressed by the faggots - in fact her reaction of "they're full of all the rubbish bits" almost got us thrown out of the shop!

Mrs Kimber is a fantastic meat expert. The previous week she had been to a meat show at Smithfields to exhibit a huge rib of beef and a dressed turkey. The trade reaction had been so overwhelmingly good that a Frenchman had bought the beef to take home to France... higher praise than this is hard to find! I guess that's why the Frogs call us Les Rosbeefs.

Talking of beef... after we had finished ogling all of the meat in Kimber's store we picked up a couple of giant rump steaks paid up. As Mrs Kimber was settling the bill we started talking about turkeys. This Christmas they are due to sell around 1,000 birds.. which seems pretty impressive to me. Just as she was telling us how they are all grown on site and killed in the barn I looked out of the window to see that it had suddenly started snowing... but in fact the whole farm was being treated to turkey feather snow storm!

Cowie's dad took control of the steak. Salt, pepper and oil did the job. We sandwiched the meat between a toasting wire and balanced it on the scorchingly hot embers of the dining room fire... 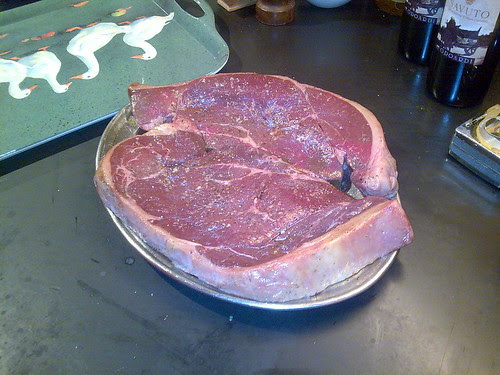 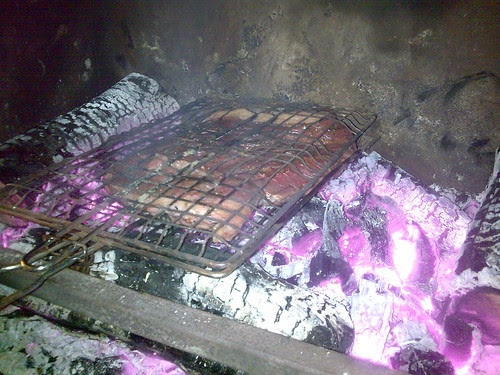 4 minutes on each side and the same for resting yielded a perfectly scorched and rare steak. All the meaty, fleshy smells are extracted by the chimney. So it is not only cheap on fuel but also great for stopping the house from smelling of burning meat. I'm not going to have my steak cooked any other way from now on!

Hubby has just read this post over my shoulder and is determined to cook steaks over our our fire now!

This sounds amazing! The closest thing I've had were lamb chops and lamb ribs cooked outside over a dried grapevine fire. Shame I don't have an open fireplace in our flat. Or even drawers in the kitchen so all our cutlery stands upright in containers!

How wonderful! I want my steak cooked like this! I#m going home this weekend, I wonder if my parents will go for it...That certainly is a fine looking hunk of meat too. I am pleased to hear about the Frenchman too. Yes, we do produce good food! It sounds like those lovely people you bought it from are very passionate about their meat, great stuff. And faggots - yum!! Didn't know I was eating lungs though but that's ok, I think!

It really is a great farm shop. They visit many farmers markets in the area. I've found their website - so have a look their site to find out more.

Cooking steaks on an open fire indoors is now one of my favourite things! It's basically like having an indoor BBQ.

That sounds great! Obviously not viable in my South London flat, but my parents have an open fire - I wonder if I could convince them to cook that rib of beef they've bought for the Christmas period this way...

Sounds great - like the carnivores version of toasted marshmallows

With all the fire regulations in London is really isn't viable and I may get in trouble from the London Fire Brigade for suggesting dangerous practices!!! Look out for me on page 3 of the Metro.

Would be a great way to start your rib off... get the outside nice and charred and then whack it in the oven. It would be insanely gorgeous.

I guess it's a bit like toasting marshmallows but much, much better. But then again I don't really like marshmallows!

This sounds like a great method for cooking steak. Danny is eager to try it asap.

Happy Christmas hols and all the best for 2009.

It works brilliantly Cottage Smallholder... give it a go. Have a great 2009.