Take a large and inexpensive lump of pre-scored pork belly from Brixton market. Cover it in salt and five spice. Wedge pieces of star anise and cinnamon bark into the seams of fat. Trim off nipples. Then roast in a seriously hot oven until the skin has started to become slightly crispy.

Turn down the heat to around 170'c and manoeuvre loads of ginger, a couple of chillies cleaved in half and a few cloves of garlic so that they raise the meat up from the base of roasting tin. This lets some of the fat render out. Roast gently for an hour. 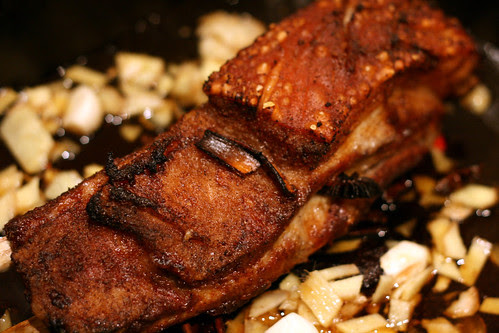 Pour off the oozing fat and replace with an unhealthy glug of soy and some sake. Add more ginger, star anise and cinnamon. Return to oven and slow roast for 3 hours, topping up liquid when needed with rehydrated mushrooms and resultant stock.

Remove meat and place on a wire rack on a baking tray. Add more salt to the skin. Place under grill and give it a final whack of heat to crisp the skin up so it blisters. 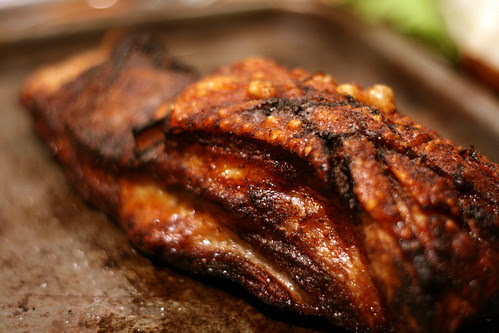 Pour off the dark, juice into a sauce pan and add mirin, sake and rice vinegar. Reduce violently until it is sticky. 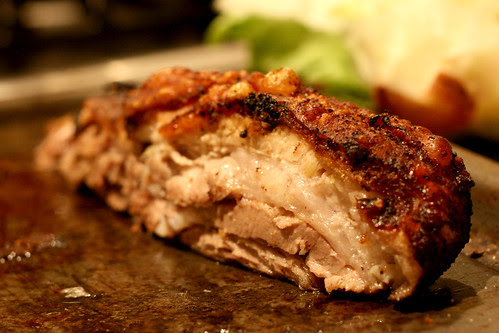 Meanwhile boil some rice noodles and steam some lettuce. Remove, pork from oven and hack in half. Combine all elements and serve to your ravenous housemate. Simple, cheap and seriously tasty. 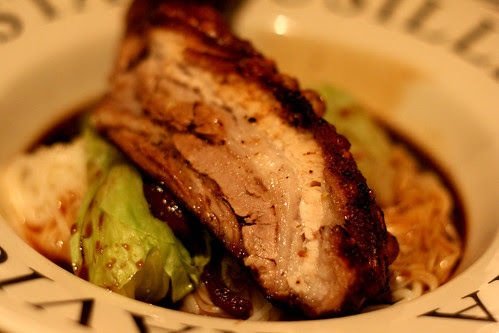 Fab. I'm sending this link to my student son, in the hope that he'll make this soon

Thanks for sharing
Joanna

That's a pleasure. Hope he likes it. It couldn't be much easier.

Glad you like it Niamh. I took inspiration from your cider and lentil recipe... and then thought... let's go oriental.

Oh, my, God. That looks amazing. The pork belly never fails to get me drooling!

This looks amazing! Very authentic too, I must say. I love the combination of crispy skin and tender meat...

Hi Helen... glad you liked it. I really surprised myself at how amazing it was.

So pleased you like it and that it gets a tick of approval! Crispy skin and soft, unctuous meat does it every time for me.

Even though I am the rather well-known "therealchiffonade", the Senior Staff Member of the Serious Eats website in New York City, I guess you missed my latest post.

My boyfriend "Big Bear" weighs 437 pounds, he does not have a neck, he has full-blown diabetes, he has lost ALL of his teeth, and I CANNOT feed him roasted pork.

So instead, I will be serving him Spinach Fettucine for Christmas dinner.

Yum, I love slow roasted pork of all kinds, but this is definitely one of my favorites!

Glad you liked the look of the pork. I'm already planning my next pork belly dish.

Sounds lovely, I have a small piece of belly pork than I am planning on cooking this evening, so while my timings will be shorter, the flavours sound fabulous. Thanks for the idea.

Hi Kitchenhand - the flavours work really well. Cook it for as long as you can and make sure you use enough salt to get some crackling! Yum!

It was fab thank you, next time I am going to try it sous vide and then put under the grill

Glad you liked it. Sous vide sounds a lot of fun. Looking forward to hearing how it goes.

Will let you know how it goes