A Perfect Lunch at The Gurnard’s Head, Zennor

As we left St. Ives and headed west towards Zennor, the sun emerged from behind some sulky grey clouds and bathed us in warmth and optimism. I never thought we’d ever get to visit The Gurnard’s Head, which stands out in Diana Henry’s books as being one of the best gastro pubs in the country, but also the most remote.

After wiggling along the “Top Gear testing-esque” road we stumbled across the image we’d seen in books and on websites many times before. The iconic image of The Gurard’s Head Hotel with blue sky above and brown cows in front. I can’t think of a more welcoming sight. 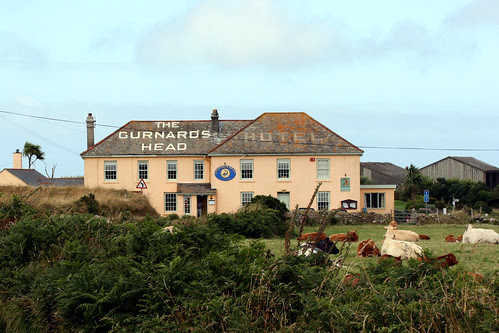 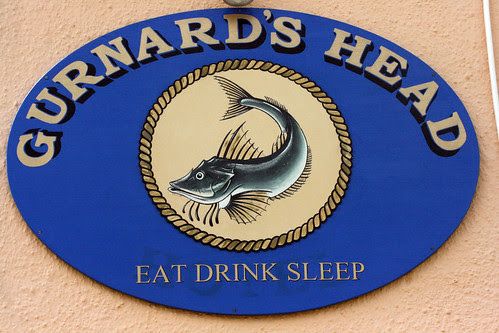 The pub is renowned for its top notch food and relaxed but stylish atmosphere. A collection of friendly paintings adorned the walls evoking a feeling of being in a successful friend’s living room. Groups of walkers, families young and old congregated around plain tables and basked in comfy chairs. A toddler spent the whole time re-arranging the library and doing sprint starts towards the kitchen. Cookery books were strewn around along with guides to the local area and switched on staff never missed a beat. 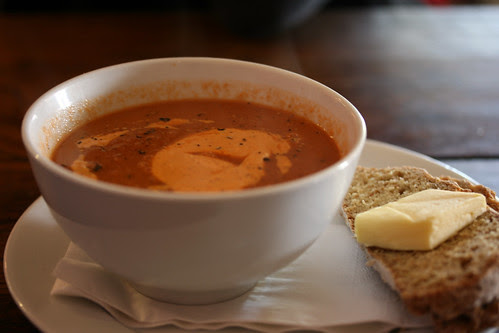 We shared a perfect, deep-crimson, bowl of fish soup which came with a fully leaded rouille and some crusty bread. At the last moment they grate some orange zest on top to give it an extra lift. This put the fish soup from The Anchor at Walberswick to shame and is a contender for “best fish soup EVER” in the words of Comic Book man from The Simpsons. 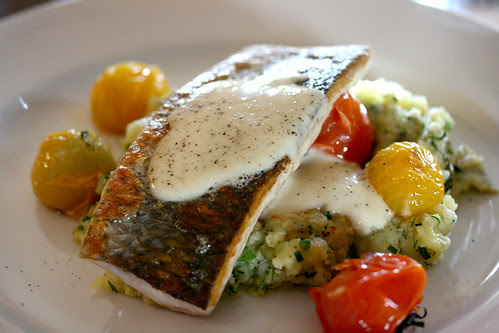 A fillet of grey mullet, served with aioli and squished new potatoes and bursting tomatoes was divine. The delicate skin was crisp, but not burnt. The supernova-white, flesh teased apart and wasn’t muddy. Spot on. 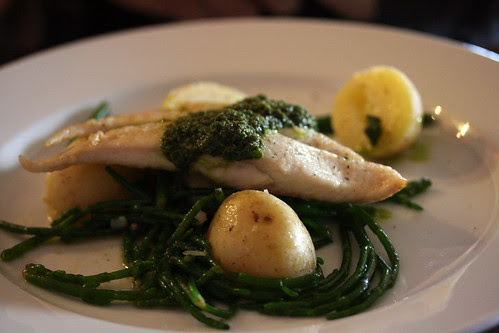 Cowie’s sea bass with samphire, new potatoes and salsa verde was equally as good. There was nothing pretentious or flash about either dish. But neither could have been bettered.

This was without question our best lunch of our trip - and quite possibly my favourite since the Paunch began. It was so good, we are going to find their sister pub in Wales, called The Felin Fach Griffin Inn, which AA Gill once described as “Exceptional anywhere in Europe - in Wales, it was as damn near miraculous as the Angel of Mons".

We wish we could have stayed all day, and then tucked into supper. But alas, we had to move on. But isn’t it great when you leave somewhere wanting more? 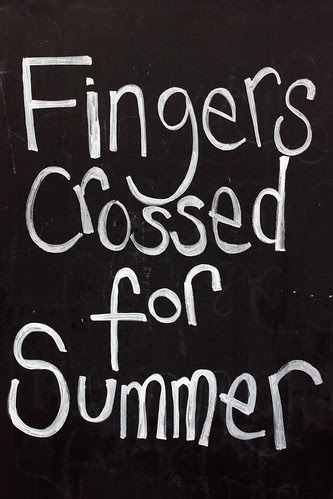 This is part of a series of posts about our foodie odyssey around the South West.
Posted by Browners at 14:39

Reading these posts is like re-living my childhood - I know all these places so well. In fact, next time I'm going to make sure I'm at home before I start reading because they make me so over-emotional!

Just came across your blog and I'm so happy that I did- I have to say it makes me rather homesick! Still at least when I do come back one of these days I'll know where to eat! How do you take such great pics inside the restaurants? Do you carry a light in with you with you!? Thanks for a a great read! Anna

@Helen - I'm touched that you're getting emotional. It's such a wonderful part of the world. Next up is Falmouth and Fowey.

@londonfoodieny - Thank you so much for saying such nice things. You must have a great time in NY. I'll do my best to keep you getting homesick!

I just use a Canon EOS 400 with a very nice 60mm macro lens which has a nice wide appeture and gets a lot of light in.

I forgot to ask, didn't come across any star gazey pie then? ;) Are there references to it all over the Gurnard or have I just made that up?

Very nice looking Pub indeed, almost impossibly idyllic - I thought I'd heard of Diane Henry before and just realised it's the GastroPub cookbook author - I have two of her gastropub books on my wishlist....now I'm going to have to buy them both.

Are any of her other books worth getting?

You'll enjoy The Griffin. A wee gem and it's location has helped it net some big name reviewers bailing out of book plugging in Hay on Wye. On which note, if heading that way try and coincide it with a visit to the Abergavenny Food Festival. It's very impressive. Last time there I went to watch Gill and Bourdain interview each other and picked up a pretty serious tea habit after the founder of Jings gave a mesmeric talk and tasting.

Lovely! What a great place. The dishes look simple and non-fussed, which is just what you want from a pub really.

This sounds amazing that fish soup looks brilliant - such a rich colour. Will have to try and find it if I make it down that way.

@Gourmet Chick - the fish soup was the best we had on our trip. And dare I say it, the best I've had. Delicious. That touch of orange zest really made it.