Fowey is a stunning seaside town, dedicated almost entirely to boats. Chaps in thick sweaters, boys in sailing caps and squawky seagulls compete for attention, whilst cars squeeze through streets so tight you’re surprised when they don’t all get stuck.

Our camp site was on the east side of the estuary and as luck would have it, Cowie’s car turned out to not be amphibious, so we soon became the ferryman’s favourite customers as we shuttled between tent and food. 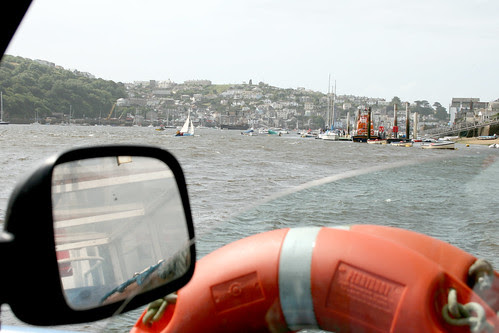 We ate extremely well in Fowey, thanks to everyone’s suggestions. We had a lovely, sunny lunch of crab and sardines at Food for Thought in the main square, waited on by a Hungarian staff. It was perfect for our needs, but we’re pleased we went for lunch rather than dinner.

Having failed to get a table at Nathan Outlaw’s star spangled restaurant we had to make alterative plans. Our second option was to dine at The Old Quay but after a chat with their ex-fish supplier and a glimpse of their, rather expensive, menu we decided not to go. With its terrace overlooking the estuary, The Old Quay would make a great spot for fruit de mer as their sun goes down or crab salad at lunch time perhaps. But with the sun already down it would have been silly to pay the premium for a view and not see it. We also looked at The Other Place which seemed good on the website, but less enticing in real life. And had a great tea stop in a hippy café called Pinky Murphy's watching cars holding their tummies in as the teetered through the cramped streets. 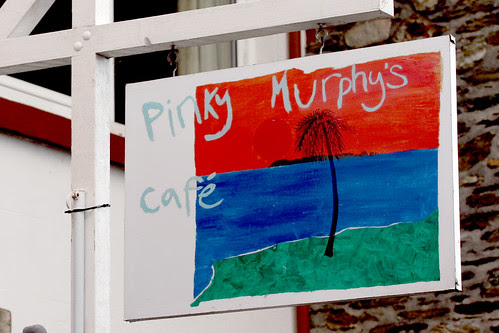 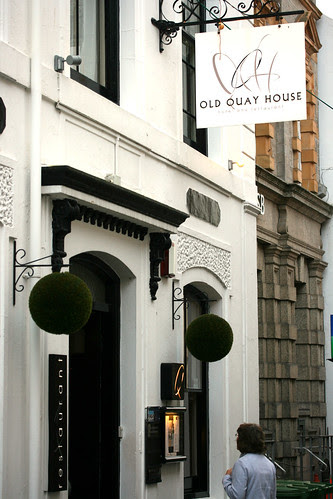 Having assessed all our options, we landed up going to Sams. Of all the restaurants we visited on our trip, it had by far the most atmosphere. We were greeted with a barrage of energy and off beat humour reminding us of a combination of School of Rock, True Romance and Empire Records. The format is certainly working for them. We looked at the menu boards, placed our order with one of the three Sams and then joined the queuing masses upstairs in the bar. 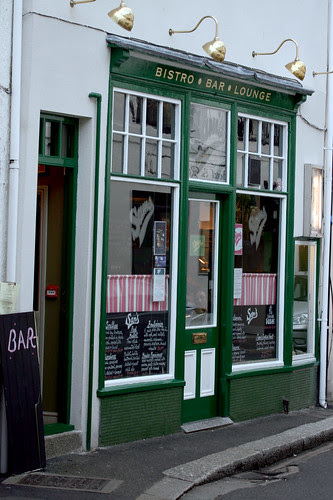 An hour or so of drinking with some long lost friends and our table was ready. Apparently, in yesteryear, the pre dinner drinking took place on the street outside rather than in the slightly cramped bar upstairs which would have been a lot more fun. Rumour has it, the pre dinner boozing is designed to get everyone in a good mood so they don’t think too hard about the food. A tried and tested technique and a major reason for American restaurants all falling apart in the dry years.

We started with an enormous portion of stunningly crispy and juicy red mullet tempura that had us purring with pleasure. Thumbs up. 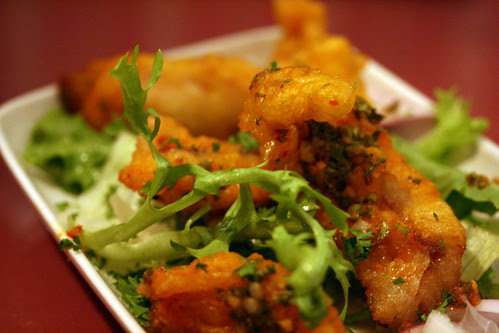 So far so good. We were nicely sozzled and beguiled by our starter. Then our distractingly attractive waitress started to work her magic as she brought me a steak knife for my skate, before realising that she’d muddled up her letters. When the skate arrived, I almost asked for the steak instead…

It was very tasty and ample, but let down by being overcooked and swimming in an estuary of caper butter. As much as I like chips, something less deep fried would have been a welcome foil for the grease on the plate. Unless of course they thought I was having steak and were hedging their bets. 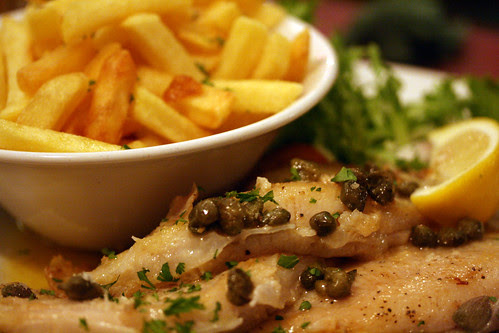 Cowie’s sea bass was a mirror of my dish. An unattractive assortment of sea bass fillets jostled for position with a sprouting bean salad. Neither main course allowed the fish to be the star of the show as the red mullet had been with our starter. Which was a shame. 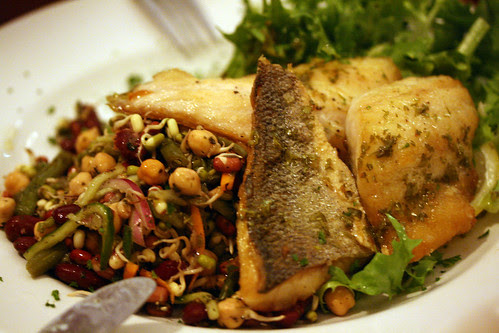 We feel bad criticising the food, which was enthusiastically off-key, because we had a really fun evening. Much like being at a karaoke bar or a mate’s gig. Other than a great starter and an epic soundtrack our highlight was watching our waitress spin from mini crisis to full on diplomatic row, but all the while admired and cheered on by her adoring bosses. We'll definitely come back in search of their bouillabaisse or for some lobster and chips next time we're in Fowey.

Our 1 mile trip home took around an hour as we had to drive all the way around the estuary because the ferry stops at a very leisurely hour. Silly us for expecting it to run late. Despite the messy main courses we loved Sam’s because it was simply great fun. It’s food as entertainment rather than being pretentious, fiddly and quiet. If you’re in the Fowey area and want to have a laugh with some decent food to soak up the booze, coupled with amusing service then Sam’s won’t let you down. If they could just replicate the brilliance of the red mullet tempura then it would be a belter…

This is part of a series about our trip around the South West.
Posted by Browners at 23:03

Sounds like such a fab trip, even if the food didn't always quite pass muster.

Winner for best-named place must surely go to Pinky Murphy's.

What a brilliant trip. Your reviews will come in handy when I visit your part of the world. Can't wait! Makes me want to pack up now and head off with my tent.

Thrilled to hear Sam's is still a great night with good food, as its probably about 9 years since was there, but really loved it. Always thought it was a simple idea to only do burgers and fish, but to do them really well. I feel happy that I can keep recommending as a place for a relaxed night. I wonder, do they still go off skiing for half the year? Always seemed like they had work/life balance pretty good!

@syrie - Glad you enjoyed the review. There are a few more left in the series which should be going up this week and next. Where are you going?

@Helen T - Sam's is going strong. Apparently they've got a beach front pizza shack as well now. From what I can tell they're living the dream!