Our odyssey around the South West of England started in St. Ives with the rain screaming down and the forecast looking gloomier than Eeyeore at a funeral, which serves us right for having the audacity to spend our summer holiday in the UK and to expect sunshine! Spurred on by a break in the clouds Cowie and I went for an evening jog in order to work up a serious appetite and get a feel for the local area. Given that I only had 2 pairs of trousers for the trip and both were a touch snug, regular jogs to keep some of the impending weight off seemed like a good pre-emptive policy.

A combination of sheer tiredness, rain and a lengthy walk led to us driving from our base at the Atlantic Hotel to Porthminster Beach. Sadly, as we had been warned, parking proved to be more difficult than getting a seat at rush hour on the Northern Line. For 30 minutes we explored alternative parking options, including such no-gos as a retirement home and cemetary, before heading back to our hotel and asking for a taxi. Several phone calls to cab companies later left us stranded with a 50 minute wait for the next cab! So we made another attempt at parking and got lucky, over an hour after we had started!

We arrived at the Porthminster Beach Cafe in a flap, with the rain teeming down to a charming welcome and a prime table overlooking the beach. If the weather had been better it would have been the best view from a restaurant table in the country.

A glass of sparkling raspberry Champagney stuff from Polgoon in Cornwall put us in the holiday spirit and turned the gloom outside into a sparkling, pink glow, just like our fizz. (It was a product we saw time and again around the region and is on the menu at the National Café.) Children’s crab buckets were filled with ice and used to chill the wine.

The menu was exhilaratingly charged with fresh ideas from countries far, far away but based on the fruits of Cornwall. Cowie’s scallops with cauliflower puree, bacon, spiced nuts and a warm grape and truffle jelly was stunning to look at and almost as good to eat. Some more seasoning and this would have been worthy of being exhibited as a multi sensory installation at the Tate down the road. 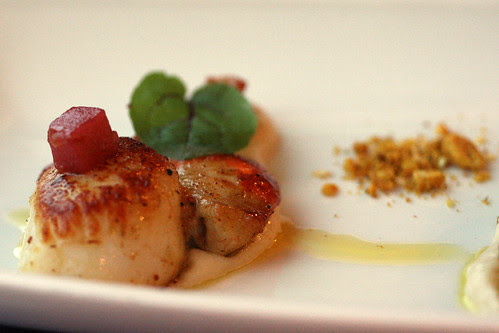 My crispy squid with citrus white miso, black spices and crispy shallots was magical. Apart from the last part. As ideas go, it’s up there with some of Baldrick’s less successful ideas. But luckily the burnt shallot dust was kept in its own vessel and wasn’t allowed to contaminate the fantastic squid. Meltingly tender and crusted with crispy batter, it’s a dish that I won’t forget for some time. 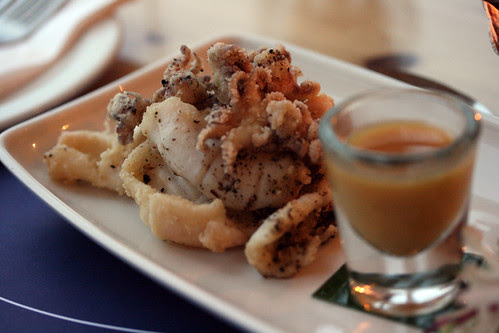 Cowie’s monkfish curry is one of the Porthminster Café’s signature dishes. The rich stew is an amalgam of prawns, mussels, tamarind, turmeric, coconut and chunks of monkfish topped with tomatoes almonds and tomatoes. 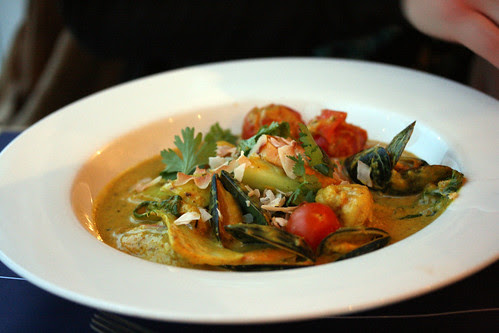 Unfortunately, the plate was cold and the food only slightly warmer so we sent it back for a quick blast in the microwave! The flavours were generous and deeply satisfying, if a little light in the chilli department.

My John Dory with crab fritters and an oriental dip, on the other hand was disappointing. The fish was meagre and over-cooked. The crab balls were bland. And the whole thing a shadow of what a good piece of John Dory can be. Plus, the use of a shot glass was a touch repetitive. 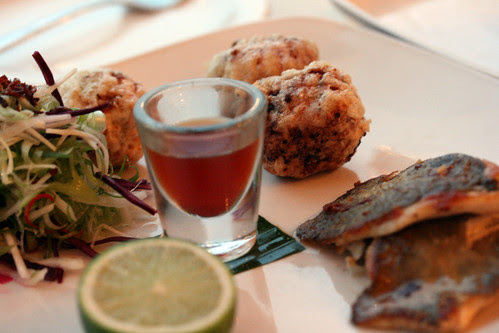 We shared a tamarillo themed dessert to finish, but as we tasted each component, wished we hadn’t. The best part was a gorgeous crème brulee which was the least infected by tamarillo! And why did all three of my courses have to feature a shot glass? 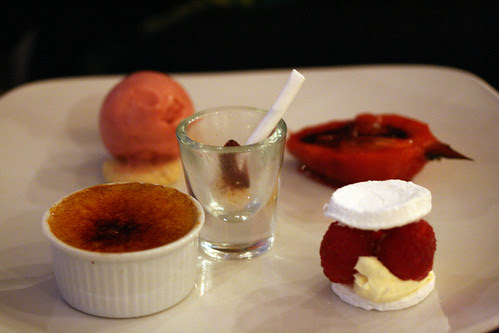 It was the most expensive meal of our trip with a very creative menu and a chic atmosphere that you will struggle to find anywhere else in the South West. Whilst, the food started brilliantly it tailed off like the end of a ballad as the ideas got more overworked. If we’d been watching the sun go down or alternatively having lunch overlooking the beach we’d probably have ignored this and thought, “wow”. But without the view to offset the culinary slip ups, we were left feeling impressed in general, but slightly irritated about the food and wondering if they are becoming victims of their own success.

The following day we had coffee at the Porthmeor Beach Café, with Tate St. Ives behind us and sun drenching the beach. It almost felt like we were sitting in a postcard. Over the course of 30 minutes we oohed and aahed as the kitchen emitted the most incredible smells of fresh fish and wafts of garlic and saw dishes of crab claws and bowls of rich fish soup land in front of wowed diners. If we hadn’t been going to The Gurnard’s Head for lunch we’d have tucked in and no doubt raved about it. We also heard that Porthgwidden Beach Café, is preferred by those who consider themselves to be in the know. Their menu is far less elaborate than Porthminster’s but that’s no bad thing. The sound of their seafood pancake has got me excited from 300 miles away!

St. Ives is incredibly lucky to have not one, but three fantastic beach cafes that serve a stunning range of top quality food with views over the sea – which can’t be far off being unique for a town of this size in the UK. You’ve also got the added bonus of stunning beaches and access to Vicky’s bread, (from Fore St. Deli & Digey Food Room) which wins awards on a regular basis.

For more foodie information about St. Ives have a look at this website.

This is the first in a series of posts about our trip around Cornwall, Devon and Dorset which you all helped to make so special by responding to our call for help.
Posted by Browners at 12:32

I adore St. Ives as you know but I've never made it here. Not that I can remember anyway. Those shot glasses! The only way they could be worse is if they were made of plastic - not that I'm going to mention any name (SKETCH)

Shame 'bout the weather and the parking guys...but you have chosen August. I most recently ate at PMBC in April and did have a brilliant lunch plus a view out to the lighthouse.


I'm afraid Salcombe is much the same at the moment. It's a bit like walking down the Kings Road on a Saturday afternoon - too many people and spotted with people you know. (Mostly from London). And the weather has not been kind of late.

Anyway if you're around on Friday or Saturday do try The Old Bakery in Kingsbridge for supper - otherwise it's worth a tapas lunch stop there(http://www.theoldbakerykingsbridge.co.uk/). Park in the creek car park opposite.

Hope the rest of the trip goes well.

@Helen - Bloody shot glasses. 3 in 3 courses! Is it me or is that completely potty! I thought of you as I wrote it and had a hunch you'd have something to say about it!

@Chris Smith - The weather and parking aren't PMBC's fault in the slightest. Completely out of their control. I'd have loved to have seen the lighthouse. We'll go back for lunch one day.

We've already completed our trip - we got back at the end of July - and are now faced with the task of writing all 10 places up! We had a wonderful time. Many thanks for your suggestions. We had a great day of sunshine and beer in Salcombe. The weather Gods were cleary shining that day.

Effing shot glasses!! Why oh why?! It's a shame that it didn't live up to expectations, especially given the palaver it took for you guys to get there. Looking forward to hearing more about your trip - St Ives is also one of my favourite places. I went there when I was 17 and studying Barbara Hepworth - beautiful place.

@Lizzie - Bloody shot glasses hey! There are some great meals to write up. I'm dying to write up The Gurnard's Head and the Kings Arms. Stay tuned. I've got a lot of keyboard bashing to do!

I've always wanted to go to St Ives, but we have never made it further west than Rock/Padstow.

They clearly thought they were onto a good thing with the shot glasses - hysterical!

@TC - The shot glass situation was getting out of control. I'm sure if I had ordered an ice cream or an espresso it would also have come in a shot glass. Come to think of it... did the bill arrive in a shot glass?