“Arrive with an open mind and imagine, if you will, a painting that never dries” – (Mark Lawson Bell-Artistic Director)

Sketch is one of the most creative places I’ve been to. More playful than most art galleries. More imaginative than most theatre productions. And as creative as any advertising agency I’ve been involved with. Sketch is an art gallery, bar, living room, tea shop, restaurant, bonkers water closet and catwalk rolled into one. If you are the kind of person who likes ideas you’ll love it. You’ll drink it in and ask for more.

We were greeted by the most charming Maitre D’ we have ever encountered. Nothing was too much trouble and everything was done with a twinkle in the eye. He showed us around the whole building including being allowed to peak into the Lecture Room where a handful of lucky people were tucking into some Michelin starred food… 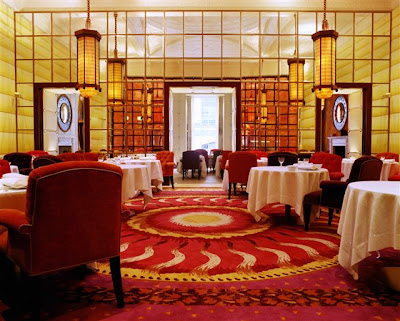 On our tour we fell in love with their eccentric taste in art. In particular the sculpture of two dogs going at it hammer and tongs and the glitter ball girl with syringes sticking out of her head! The whimsical art sets the tone for the creative food that we were to discover in the Gallery. 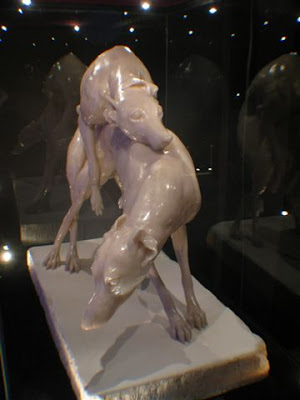 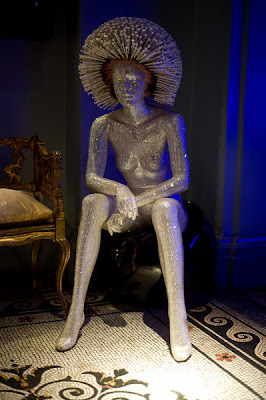 We were given the best seats in the restaurant with full view over everything. It was like being a dictator watching your troops do a big parade… except the troops were all girls and rather more glamorous than what your normally see on Newsnight. We sipped more champagne as a big ball bounced around the white walls, projected on the bare white walls. The Gallery is a blank canvas that is brought alive by a series of projectors that captures Mark Lawson Bell’s opening statement. Apparently the previous projection of an irritable fly sent everyone a bit mad! 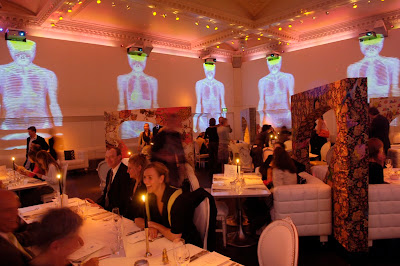 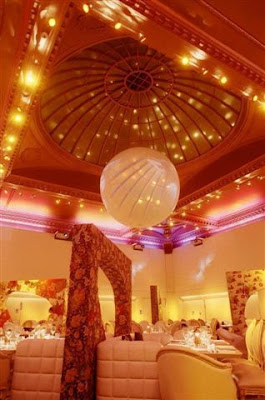 The bread was so good that Cowie tucked in too. The fact that it was served in a basket made of Lego had me almost in tears with giddy joy. It transported me straight back to my childhood memories of messing around for hours, days, months and years with multi coloured bricks and little men with arms that don’t move very well. “Little touches” like this aren’t just good ideas they are moments of genius that have been dreamt up by someone who understands the way the mind works and should really work in advertising. I vaguely remember the bread being good (and if it hadn’t been the whole thing would have imploded), but it’s the Lego basket that has stayed with me. And the message encoded in the Lego basket is of playfulness and creativity.

Our starters were works of art that tasted almost as good as they looked.

Tahiti - ceviche of grouper, barramundi & red snapper marinated in coconut milk & lime was a platter of firm fish textures that aims to transport you to Tahiti, not that I’ve ever wanted to go. It was cool, light and full of tropical tones. Maybe it should have been called a Pina Colada though.

Cowie’s “Red Tuna” was a giggle. What we thought was tuna turned out to be watermelon! And then when the tuna was served it was soft and fiendishly good. Not sure we should be eating tuna though. Tut tut.

A shared bowl of ravioli with a chicken and gorgonzola broth was superb. The waiter almost refused to let us have them because he wanted them for himself. I couldn’t help myself from pouring more sauce over my pasta from a silver tea pot that I wanted Cowie to sneak into her handbag!

For some reason I chose beef tartare (diced rib-eye with mustard, gherkins, spring onions, capers, egg mollet, Espelette pepper, parsley, fondant potato, fresh spicy tomato). Get raw beef wrong and it’s not only dangerous, but also highly unpleasant. The next tartare I eat is going to have to be very good to beat this one.

Mediterranean cod was great fun. We almost sent the plate back at first as it looked like a mozzarella and tomato salad. But as Cowie started playing we realised that the soft white cheese was actually cod and the olives were dark green gnocchi. The dish had been styled by someone who likes to tease! The fish flaked. The dark green gnocchi were soft but had bite. It was a beautiful dish that reinforced sketch’s reputation for cooking fish. 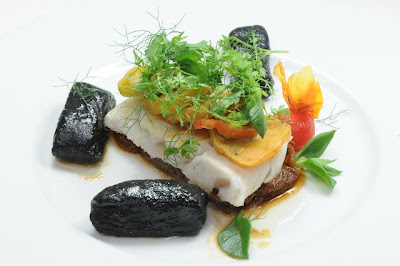 Cowie loved Malabar. It is a dessert that has been inspired by a brand of French bubblegum. It’s one of the stars of the menu, but given that I don’t like bubblegum it isn’t for me.

My Cadiz was a brilliant rhubarb and orange number. It came with some rhubarb marmalade and shards of glassy rhubarb sticking out of some ice cream. Not only was it beautiful, but it acted as a giant palette cleanser. Any residual beefiness from the tartare was replaced by a feeling of freshness. It has inspired me to make some rhubarb marmalade. 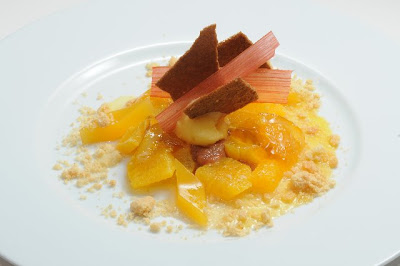 Despite our banquet being at an end, the fun hadn’t stopped. My espresso was served in a flexible coffee cup that had a touch of Dali about it. And as for the Dr Evil loos… wow! I’ll let the pictures do the talking. 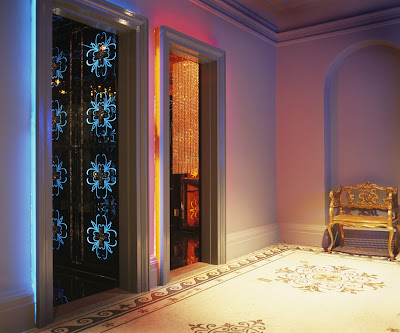 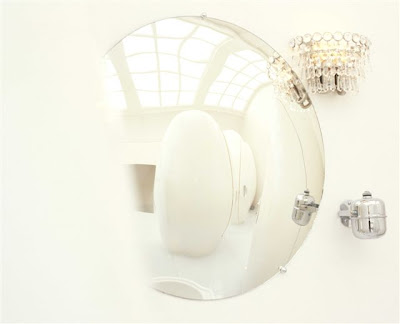 It wasn’t just a meal. It was a Hollywood assault on the senses. An uber-camp-experience that was fizzing with creativity and glamour. At sketch the idea comes first and then everything follows, just as it does in an ad agency. Rather than a kitchen it has a creative department. But it also comes with a bill so abrasive it is delivered in a sandpaper envelope. Luckily we’d taken advantage of their £50 off voucher on their facebook fan page and had held back on wine so whilst being so expensive it could cause a run on the Pound, was a fair price at 140 quid. Especially when you consider that the sketch experience means tickets for the theatre, art gallery and entry to a nightclub aren’t necessary.

Eating at sketch is like being a client and turning up to an advertising agency such as Mother where they will blow you away with their bonkers ideas and slick presentation and then send you an embarrisingly large bill. And sometimes their ideas will be full of hot air and hopeless. But because they are so fresh and original you'll pay the bill and tell your friends to go there too. Sketch - are you an advertising agency in disguise?

All the photos are from a nice person at sketch.
Posted by Browners at 14:19

What did you think about their plastic shot cups? Are we not to be trusted with glass...? Looks like we had wildly differing views but I agree, the decor is fantastic.

Wow. We had hugely different experiences then! Of the same dishes..! Did we eat at the same restaurant?! Agreed on the styling though, it is magnificent - love the loos.

@Lizzie - I can't remember the plastic shot glass but I remember you and Helen mentioning it. We had a great time, but I completely see that you both were badly let down the first time.

@Helen - Very different experiences indeed. If restaurants are judged on consistency then it's not done so well. But our experience was fantastic.

Maybe they changed the shot glasses after our appeals..what with us being so influential and all ;)

@Helen - That could well be the case. But then again we went 2 months ago now. It's just taken me an age to write this!

Excellent writeup, really makes me want to go. And what a great offer!

@Manne - It was a phenomenal offer. But I suspect it's probably at an end now. Very OTT. But London needs this sort of thing. That's why we have lots of different restaurants.

Wow the decor seems to be over the top. Looks very grand

@Jackie - the decor really is incredible. The whole place has cost £12 million apparently.

Wow, sounds like you had an amazing time! I am going to the Library & Lecture Room soon, and am now even more excited. Thanks for the great review.

@Laissez Fare - We did have an amazing time. We were treated like Super Stars and loved the theatrical environment. The Lecture Room and Library are far quiter than the gallery but are supposed to be impressive.

Oh, that's interesting! Now I want to go :) Maybe I'll treat myself to lunch next week (with that voucher ;).

Sketch are getting a lot of blog coverage with their voucher. I really enjoyed my afternoon tea there - I wasn't brave enough to go for dinner after hearing some really bad reviews but tea was great. For those who are wondering the voucher is valid until the end of August.

@Niamh - The voucher lasts until the end of August. Make the most of it. It's a lot of fun.

@Gourmet Chick - Their voucher has worked very well for them hasn't it! Lizzie and Helen had a bad experience, but we were lucky. We were treated like rock stars and had a fabulous time. Very glamorous.