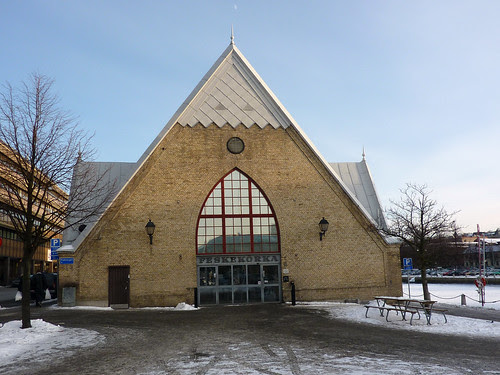 The feskekorka or “fish church” is like a Swedish temple to sea food housed inside the innards of what looks like either a whale or a Viking warship. The ground floor is festooned with orderly fishmongers selling an array of pickled fish and gravadlax that didn’t look all that different from the stuff I made over Christmas. 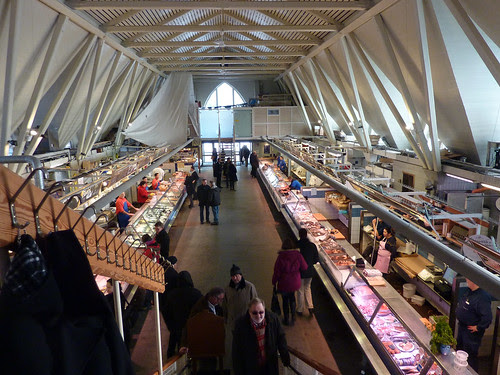 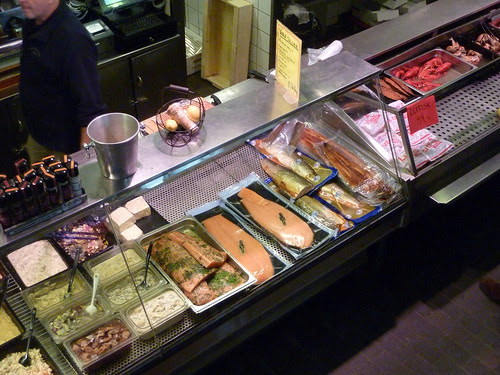 After we had gawped at king crab claws the size of Helsinki and marvelled at the blood red crayfish we were ready to eat with our mouths rather than our eyes.

There are a couple of restaurants in the rafters – we choose Gabriels rather arbitrarily because it sounded nicer. But I’m sure the other one is good as well.

Feeling cold and weary we decided to share a bowl of mussels and some fish soup which were even better than we had dared hope – even if the soup wasn’t quite what we expected. 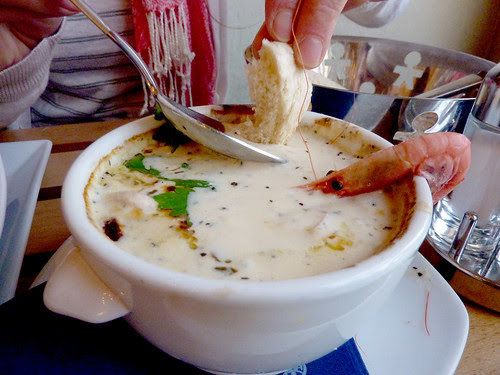 The creamy soup was almost stiff with fish – making it like the innards to Cowie’s Mum’s decadent fish pie which uses most of Somerset’s cream quota. Ignorantly, we had expected a French style soup, deep with crab stock and rouille. But this was far more what our bodies needed to fend off the sub zero conditions. It was just a shame we had to share it with a very greedy prawn! 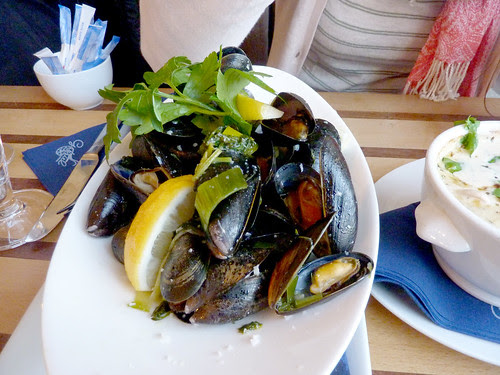 Our mussels were just as good. They had been seasoned by someone who would probably shoot an “anti salt campaigner” in the face with the result that the juicy morsels tasted sweet and of themselves. A squeeze of lemon and shard or two of sweet leek made this one of the most satisfying mussel dishes we’ve had in ages. As ever, when seafood is this fresh, it’s best to keep things simple.

We saw others tucking into dainty mini crates of prawns, grilled lobster, crab claws and smorgasbords of smoked salmon and pickled fish. We wanted it all. But held ourselves back in order to avoid getting an embarrassing call from Barclays. If you are visiting Gothenburg, you really can’t afford to miss having lunch here. If I were running the world, all cities by the sea would have one of these.
Posted by Paunchos at 12:45

This place is paradise and look at this huge soup. OK, i'm starving now!

@mathildescuisine - It's a great place. But I think my photograph makes the soup look massive!

Ooh your comments thingy moved to the top! Or has it always been there? Confused my stoopid little brain upside down that did. Anyway, I do wish you were running the world, it could do with more places like this by the sounds of things. I wish I was that prawn.

Gothenberg has never been high on my travel list (why go in February, by the way?), but that soup makes me reconsider. Loved the line about the greedy prawn.

@Helen - Bloody comment thingy has moved. And I have no idea why! I'm as confused as you are. Glad to hear I've got your vote for world domination. I promise you more seafood churches.

@An American in London - February is a great time to visit Gothenburg. So peaceful. So quiet. Such a cool place. When are you going?

Wow - what an amazing place! Well worth the trip, I should imagine.

Am off to Norway this year, but next year could be Gothenburg + Stockholm, so this is firmly noted!