What better way to spend Valentine’s Saturday than pumping out 42 miles of cycling down and mainly up the mountains of Surrey and Sussex? After our tricky cycle out of London on our trip to Lewes we decided to catch the train to Leatherhead and cycle from there instead. This increased our range dramatically and made the cycle infinitely more enjoyable. After our disappointing cycle to the Albany in Thames Ditton we resorted back to Diana Henry’s Gastro Pub Cookbook for her recommendation to visit The Horse Guards Inn, near Petworth in Sussex. 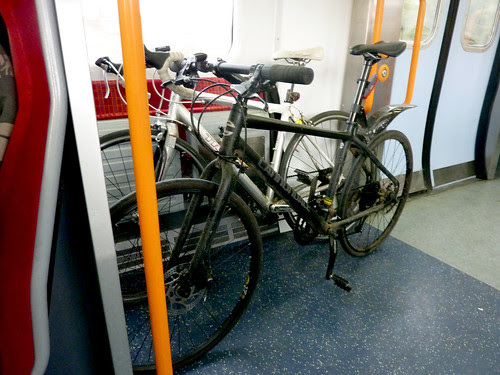 The route from Leatherhead to Guildford was quick, if a little hairy at times. And before we knew it we were in Godalming which Cowie insists on calling it Goadalminger for some unknown reason. This brought back fond memories of The Paunch’s first blog post about our stay in a tree house nearby. 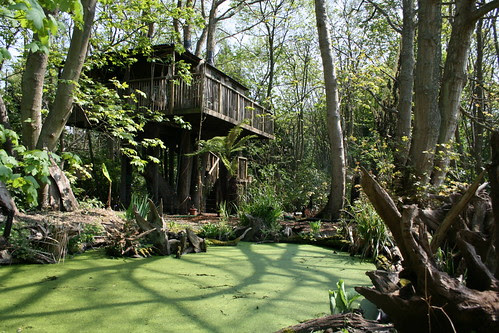 The road from Godalming to Petworth quickly became more undulating than the FTSE. Steep hills and snow didn’t make things easy. But they did help to build up an almighty appetite that only a monumental pub lunch could sort out.

We arrived at The Horse Guards Inn, just down the road from Petworth Park, in conditions that would have merited a postponement at many a Premier League football match. The warm welcome we received thawed our bodies almost immediately. And a pint or two of Harvey’s didn’t hurt either. The landlord was astonished at the distance we had cycled and couldn’t have made us feel any more welcome. 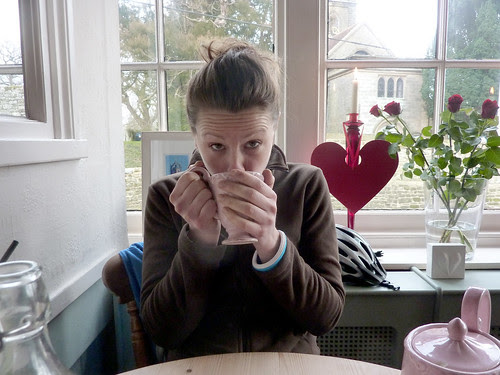 We were given a table with a view over the downs and across at the church which is many peoples’ version of the English idyll. Cowie warmed up with some tea that was served in a charming pink tea set whilst we dissected the menu.

Although the staff on the whole were brilliant, our young waiter was a bit of a loose canon. We asked him what he recommended and were quite baffled by his answers. He said he had tried everything on the menu and could vouch for it all. And then when Cowie asked some probing questions, as is her wont, he came unstuck. He hadn’t tried the hake. He suggested having steak even though the rest of the menu looked awesome. So we ignored his advice and ploughed in. 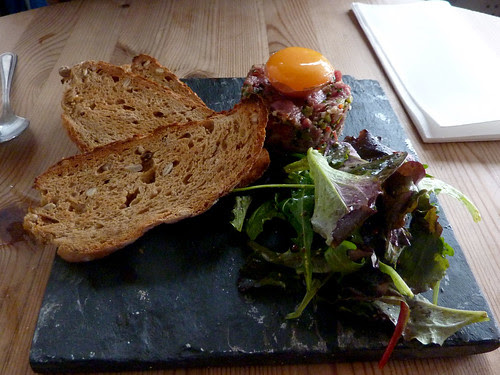 Cowie’s steak tartare was not only beautiful. But it was gorgeous to eat as well. The raw egg yolk added a glossily cocooned the shards of steak and flecks of shallot. And the toasted home made bread was perfect too. 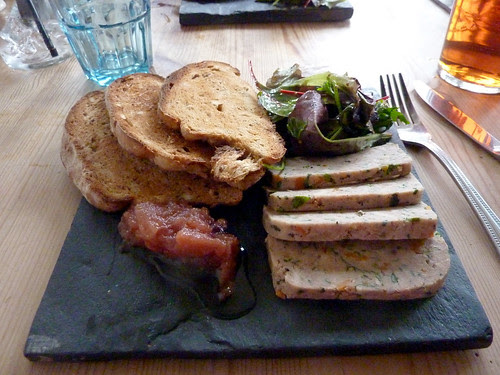 My potted rabbit was tremendous. Smeared on toast with a smidgin of salted butter it was good. But when tarted up with some rhubarb chutney it started singing from the rafters. It had everything. So much so that I almost asked for seconds. 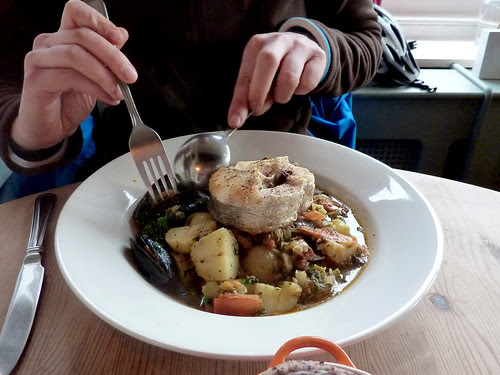 Cowie had a stunning main course that reminded us of a more British version of the fish broth she had at Porthminster Beach Café in St. Ives. This version featured a generous hunk of hake punctuating a broth that was rich with mussels, chorizo and tomato. It was truly brilliant. And just what a tired, cold, damp cyclist needs to perk them up. 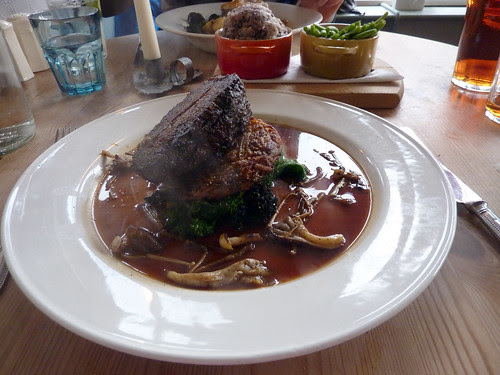 My blade of beef with cavalo nero, rosti and wild mushrooms was almost exceptional. But it bore all the hallmarks of being left under the salamnder for too long. The beef was juicy inside but a singed exterior didn’t help it out. And neither did the charred rosti or slightly acrid cabbage. And whilst I like oriental mushrooms, I don’t think they belong on a plate of slow cooked beef in a country pub. And if we are being mega-picky, how seasonal are beans in February? 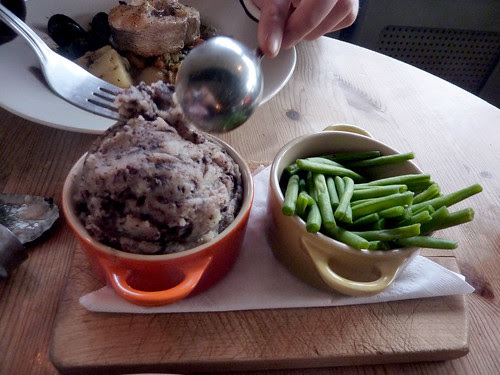 The star of my main course, in fact, was a side order of black pudding mash which was a revelation. I had worried that it would be crap. But it turned out to be magical.

With our very late lunch at an end we shuffled down the bar to sit in front of the fire and enjoy the rugby with a cup of tea and some home made fudge. The locals were warm and friendly, offering us plenty of advice about how to cycle to the nearest station.

The Horse Guards Inn is a very special place that is definitely worth cycling 42 miles for. It’s almost exactly how I’d like to run my country pub one day. Not only is it a proper pub, but it also serves cracking food, offers accommodation and they also have a mini farm shop where you can pick up home made bread and chutneys. Every village should have their own version of the Horse Guards Inn.
Posted by Paunchos at 11:14

Jonathan, I love your cycling escapades, all is for the best in the best of all possible worlds!

I am loving the generosity of that potted rabbit portion too. None of that 'one piece of bread, one slice of terrine' business.

@Wine Splodge - Nice one Voltaire. I love them too.

Really enjoying all of your trips down to Sussex as you are lining up my summer nicely!

I love Petworth. One day I will stay in the tree house, but the last time I went I stayed in the Old Station (formerly Petworth train station) in a beautiful steam railway carriage. Highly recommended http://www.old-station.co.uk/

Petworth park when all the stags are roaming about is pretty spectacular too.

@Graphic Foodie - We have fallen for Sussex in a big way. What a lovely part of the world. And the railway carriages look awesome. Thanks for the tip.

Delicious! too bad about the beff though. great photos!

@natural selection - Thanks. Was a shame about the beef. But overall the whole experience was fantastic. So we'll let them off!

Jesus H - that is a mammoth starter terrine portion! Loving your cycling exploits; it sounds like something I'd love to do if I weren't so bloody accident-prone.

@Lizzie - It's so much fun getting on your bike knowing that a great meal awaits you. To be honest I demolished that starter without it touching the sides. This is a very impressive pub. Give it a whirl.

Did you cycle on the A285 (bit scary) or did you follow the back roads?

If the latter, have you got any tips re any places that were particularly enjoyable to cycle on?

I'm planning some cycling round Petworth in the spring and would be glad of a few pointers.

That meal looks delicious and what a wonderful way to spend Valentine's Day!