A lunch worthy of beatification at St. John 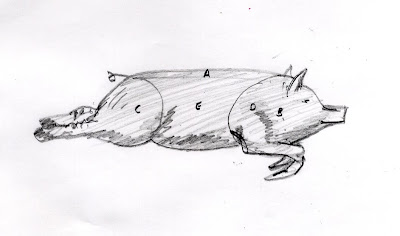 I’ve re-written this introduction four and half times now. Which is quite apt given that the occasion was to celebrate my departure from my current job after the same number of years of busy toil. And for the same amount of time I’ve been gagging to eat at St. John and have developed a zealous love of off-beat cuts of meat and English cooking styles. So to say I had high hopes is like suggesting that John Terry has got an eye for the ladies. I just prayed that all my pent up enthusiasm wasn’t going to be let down. Fortunately, it wasn’t.

From the moment we arrived in the stark but light atrium, surrounded by institutional white paint and police station glass, until the moment we left four and a half hours later, we were treated with informal efficiency. The sight of Fergus Henderson enjoying a light lunch just made the whole experience even more special.

We started with a pint of savoury Black Sheep ale whilst a colleague got sidetracked on the phone. This gave us time to delve deep into the bowels of the menu whilst tucking into perfectly baked bread. We had to be careful not to wolf it all down and spoil our appetites. 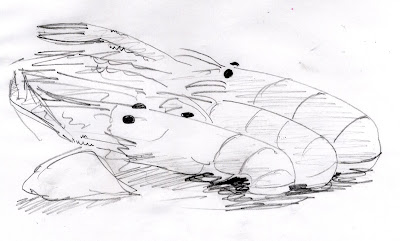 Langoustines were magnificent specimens that begged to be sketched by someone with more talent than me. They were sweet. Fishy. Juicy. A more classically inclined individual might describe them as the Platonic ideal of shellfish. The yellowy-green, mayonnaise they were served with made for perfect dunking as the slightly bitter taste helped to highlight the langoustine flavour. Whilst fiddling with the claws, in an ambitious attempt to get the last shard of flesh out, I remembered a story my father tells about how on a holiday to Brittany when I was still in a pram, I was parked opposite a lobster tank and fell under the mesmeric spell of the shellfish. The next time I was fed I rejected my pappy baby food and demanded langoustine which promptly made me very ill! This whole episode probably explains an awful lot! 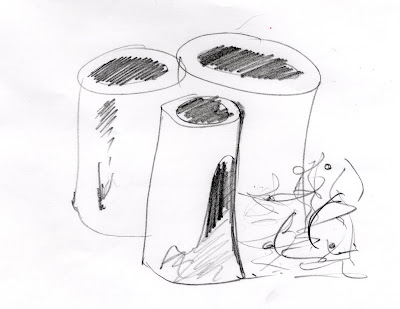 Bone marrow with a parsley and caper salad is famous. And rightly so. I now know why dogs are obsessed with the things (minus the parsley). Is there anything in the world that visually promises so little but delivers so much? Spread on hot toast and sprinkled with salt and we were all in bliss.

Sprats with tartar sauce were tremendous. I’ve had them a few times recently and these were definitely the best. Crispy, juicy and well sauced. 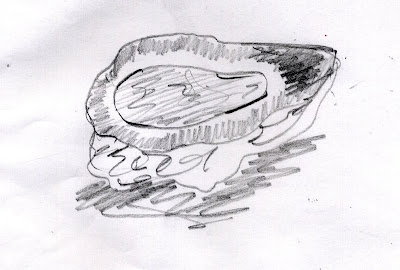 A single native oyster from Mersea was the best I’ve ever had. It deserved to be put in one of those memory capsules that school children fill with things they want people in the future to discover. Crucially it tasted purely of itself.

It took us a while to decide what to have for our main courses. Guinea fowl with lentils turned out to be delicious as did a Flinstonian sized pork chop. But I was delighted to be ushered in the direction of chitterlings and chips rather than a safer option. Chitterlings are exactly the sort of thing you should eat in a restaurant like St. John. You can cook guinea fowl, pork chops and steak at home. But chitterlings require expert knowledge to ensure they are prepared properly. Failure to do this can result in illness owing to fact that they are only inches away from a pig’s anus.

The only previous time I’ve encountered chitterlings was at Chilli Cool, where they were prepared in a Sichuan style to great effect. But this time they were simply served having been poached and then grilled over charcoal. The meat was soft, juicy and salty. Not unlike eating roast ham in sausage format. I’ve been in raptures about them ever since. The chips and sauce they came with cannot be faulted either.

Ox heart with beetroot and horseradish was magnificent as well. The heart had been sliced into livery slithers and quickly grilled. It was soft and lean like Rowan Atkinson wrapped in an acre of velvet, but a lot more edible. I just wish they served ox heart in sandwich format on a regular basis.

Excellent Eccles cakes and blackberry ripple ice cream added a triumphant full stop to our meal. It’s rare when something you’ve hyped up to biblical levels lives up to your high hopes. St. John, didn’t live up to them. It rewrote my expectations and has inspired me to eat more boldly. Thank you for the best lunch I’ve ever had in London.

High praise indeed! Best of luck for your next post, hopefully see you before you depart!

Sounds divine
And the sketches are great
Was photography not allowed?
Or were you just feeling particularly creative?

@eatmynels - Thanks for the good luck. And have fun at the food pub quiz tonight.

@catty - Glad you like the pictures and thanks for the retweet as well.

@Rob - Photography wasn't not allowed. But I decided against taking pictures because it was a very special meal that I wanted to enjoy with my friends and colleagues. Plus it's quite fun to do some drawings - even if they are a bit sketchy.

U are too modest about your talents. The sketches are great. I can't even draw a pig or langoustines like that for the life of me.

@The Cooking Ninja - Thanks very much. You're very kind. The langoustines and pig came out better than I had expected. May try it again in the future. Things like chitterlings, sprats and eccles cakes are beyond me!

I love the sketches - they look terrific!

@Greedy Diva - Thanks. Very kind of you.

that is an adorably sketched pig.

so adorable i want to...eat its chitterlings.

that sounds terrible in so many ways.

@mei - Thanks! That's wrong. But in many ways, very right.

What an evocative post, portraying St. John's majestic food in all its glory. I'm returning in April for a birthday meal, and the bone marrow will be a must.

@Laura Nickoll - Thank you very much. I hope I did it justice. The marrow is incredible.

When I first visited St. John I was a teensy bit underwhelmed. I think I had built it up a little too much in my head but honestly, since then I've wanted to go back more and more. Strange the way it has worked its way into my head really.

@Helen - I can see how that would happen. My expectations were stratospheric. But luckily we ate most of the menu and we loved it.

Your drawings are a revelation, particularly the langoustines. I think you could quite easily develope this style into soemthing rather interesting...amusing cards maybe?

Loved the artwork...you should do more!

So glad you enjoyed your lunch at St John. And great sketches too. The first time we went there for Sunday lunch, we liked it so much, we went back the following Sunday! (More about that here if you're interested: http://wp.me/pwXBH-tC).

@Laissez Faire - Thanks for the link. Great stuff. And glad you enjoyed the post.