The Albion's tucked away down a little alleyway and used to look like this in 1982. 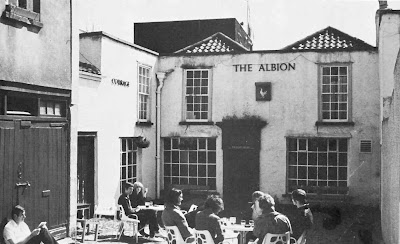 It got its name a couple of hundred years ago from a ship as documented in this guide to Bristol's pubs.

"The name, Albion, was probably given to the inn in honour of a local ship. There was a ship of two hundred tons owned by Davis and Protheroe built at the Bristol dockyards in 1778 called the Albion ~ and this could have been the origin of the inn’s name, which it has retained for over two hundred years."

The first time I visited the Albion was about 3 years ago when it was just a basic pub serving beer under very welcome outdoor heaters. It's a good stop off between the legendary Corrie Tap, Racks and Lizard Lounge.

It seems to have been tarted up since my last visit and is now an extremely smart pub with dining rooms. The menu is very Anchor and Hope with plenty of stuff that oinks and you'll struggle to find at the butcher.

We chose bath chaps and scallops to start with. My bath chaps were far fattier than I had imagined and came with a dandelion salad which cut through the greasy meat well. I'm not sure I would opt for bath chaps again because the ratio of fat to meat. However the little meat that I could find on them was so porky I thought it was going to jump off the plate and start rooting around for worms and scratch its arse on the dining room chairs.

The other diners were raucously getting stuck into their Christmas parties, tucking into immaculate looking rib of beef to share and charcouterie plates. Suz and I wondered whether we should have pigged out on half a cow, but were very pleased with our choice once my pot roasted pheasant arrived and Suz was presented with her mutton.

My pheasant was really tasty but disappointingly dry. Normally, as Cowie will tell you, I'm not a big fan of red cabbage but I loved it with my pheasant. Suz's mutton was far better. 2 large slices of leg meat were dark coloured and deep tasting. But the star was a croquette type thing stuffed with greasy mutton. The very essence of what sheep meat should taste of. Brilliant. And the fact that you don't normally see mutton on the menu made it even better.

We couldn't quite manage dessert, instead choosing to enjoy the relaxed surroundings, red wine and perfect espressos. The service was excellent. Suz was very impressed by our waitresses' fashion sense. It seems to be the kind of place well of Bristol students take their parents and loved ones when they want to impress them and they don't have to pay! I got hit with the bill which wasn't too bad by London standards but was a fair whack for Bristol. But then again this wasn't really Bristol. This was Clifton which may as well be Fulham!
Posted by Browners at 16:23