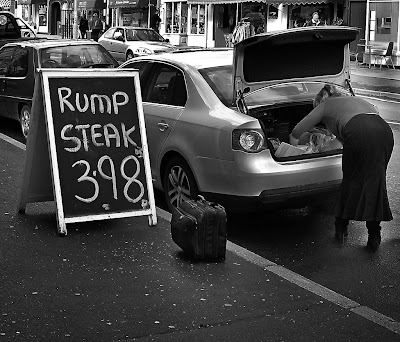 7 of us met up at La Pampa for a steak fest in honour of Wakers' birthday. Excited by the pospect of tucking into untold amounts of steak we settled in and didn't have many problems working out what to have...

3 bottles of deep purple Malbec and a variety of steaks to feed 7 please. Will and I wisely chose rare rump steaks. Opting for taste and size over tenderness. The others all chose fillets... some with eggs and some without.

The waiters took our orders very efficiently but with a not so much as a smile. Maybe they were just being Argentinian? Our steaks arrived moments later and all hell broke loose. I was presented with a medium well done fillet steak... wrong. Eventually it got sorted out but they had only achieved a 30% success rate in terms of getting the orders right, which is surprising considering we'd all ordered steak!

My rare rump steak tasted delicious despite being on the dry side of medium and one of my eggs had spent so long under the pass that it had cooked to the consistency of a hard boiled egg. The meat was tasty and had been well seasoned. But it was the chips and sauteed potatoes that won the day. Fluffy on the inside and crunchy on the outside, just like God intended.

This time last year I went to see Suz, my sister, in Argentina for a pilgrimage to gorge on the world's best beef. Each mouthful was to die for. Rich, tasty, thick cuts of beef are grilled to perfection from every part of the animal. I've never eaten meat like it. It's stunning. Which is why I came back from Buenos Aires around a stone heavier after spending just under a week there!

Argentinian beef isn't hung. Because the beasts wonder around, stress free, on the Pampas and don't get fed anything apart from grass the meat is already really tender and doesn't need to be aged. In many ways it has the texture of veal and is never chewy. This therefore makes me wonder... if the Argentines eat their beef fresh and unhung, does that mean that transporting it half way across the globe acts like hanging it? Then add onto this the fact that the transportation isn't particularly great for the environment and you start to wonder what all the fuss is about.

This is how it's done by the gauchos (photo from Flickr) 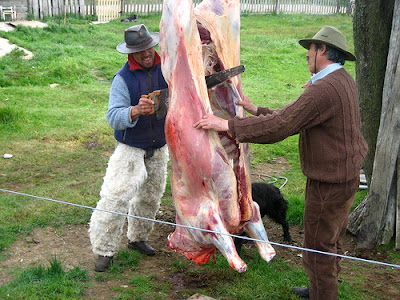 Certainly the meat at La Pampa is nothing in comparison to steaks in Buenos Aires and it also isn't up to the quality of the steak you get at the likes of Hawksmoor near Liverpool Street. So shouldn't we be supporting british farmers and opt instead for incredibly good British beef. Afterall, the Argentinian cattle are mainly descendents of a couple of Hereford beasts, so they're pretty much ex-pat British cows anyway!

We had a great time at La Pampa, despite the surly service and erratic cooking of the meat. The wine was great and the atmosphere was fun and enegetic. And more to the point how could we not have a good time celebrating Wakers' birthday. The groups thoughts on the evening were... grumpy service and "is it wrong to go for a kebab" because they had chosen the tiny fillet steaks.

Look at this two gauchos preparing the meat. It is great. I have been in Argentina once, but not in the Pampa, the people had told me that it is a very nice place to go. I wont to travel again. Also because it is so cheap. I mean, in Buenos Aires rent an apartment is so easy. I would like to know more places of Argentina