Cowie had been looking forward to tucking into a post squash, day off breakfast at Leon. She's been eyeing up their porridge all week and was more disappointed than the French when they lost out to London to win the Olympic games. I thought we were about to face melt down like in Falling Down where Michael Douglas goes postal when he isn't allowed breakfast because he is a minute too late... then he holds the whole place up with an uzi! You probably know the scene... if not check it out below...

I managed to prise Cowie away from her Uzi and we popped into Canteen instead to give their breakfast menu a test drive. Last time we came here I saw the chef ladelling out hollandaise sauce by the bucket load onto amazing looking Eggs Benedict... so it was an easy choice for me. They were stunning. Just like the photo from Su Lin from Flickr below: 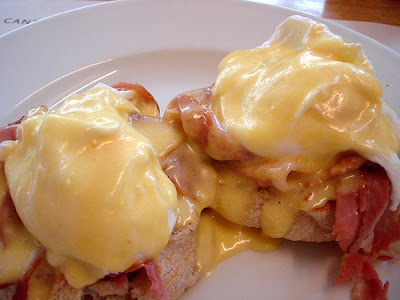 Cowie chose badly. And it ruined her morning. When her yoghurt and muesli arrived it was as if someone had just revealed that Santa Claus doesn't exist. There was the smallest excuse for a bowl of muesli resting on the side of the plate next to a vast bowl of thick dense yoghurt. All she wanted was what she asked for. Muesli with yoghurt. This was all back to front.

So we've been here twice now and our feelings about Canteen have got every so slightly less warm. I'm still keen to come back. There must be about 25 things I haven't yet tried on the menu!
Posted by Browners at 20:13