Konstam at the Prince Albert

Lulu joined us on a 6 month rotation to work on our account and has done such a good job we thought she deserved a good lunch. And I have been wanting to go to Konstam for ages so it was a great opportunity to kill two birds with one aimed throw of a stone.

6 of us trekked down to Acton Street, just down the road from King's Cross. This neck of the woods is developing a bit of an eco-conscious theme with Acorn House just up the road on Swinton Street.

The decor in Konstam is different to say the least. The girls arrived in the first taxi and drove straight past becuase it looked like a disused pub! The distinctive ball bearing curtains are very imaginative but make the room a bit dark during lunch. They also give the place a bit of a bondage feel, which is no bad thing. In fact we really liked the design and thought they were very brave to have a completely open kitchen. No food dropping here!

It's one of the most original dining environments I've been to and is a great point of difference. As a bunch of advertising people we thought they had done a great job in differentiating themselves in terms of their USP (gimmick) of all the food coming from within the M25 and the design being eye catching and unique. We did think however that the whole thing wasn't as joined up as it might be. The look and feel of the place doesn't really fit with their key selling point. But who cares! We were here for a good lunch.

Oliver Rowe has done a great job of promoting Konstam with his BBC TV show, "The Urban Chef". It goes to show if you have an interesting concept that is surprising and fits into the cultural flow you are onto a winner.... so long as the product is good too!

We started with a glass of sparkling English wine which was fantastic. Their Chapel Down NV sparkling wine from Kent was brilliant. We liked it's freshness and the fact that it wasn't tainted by any mustiness that always seems to come with Champagne. Maybe that was just us being phillistines!

My mackerel with pearl barley and bacon bits was delicious. Very unusual and really tasty. The mackerel had a great meaty saltiness that went really well with the sparkling wine. Lulu's duck and goose liver pate was smooth, ducky and really excellent. You could taste all the component parts and was even better when smeared on some crunchy toast.

My duck for main course was disappointing. It's unfortunate because I was really looking forward to it. It was overcooked which gave it a very dead grey colour rather than the vibrant pink I was hoping for. I suspect the person who cooked it wasn't a big fan of duck. Anyone who likes duck knows that it's got to be pink, juicy and with salty, well crisped skin. But to be charitable the purple cabbage and sweet mashed potato was great. As was the plum jam. Get the duck right and this would have been great!

The others had pan roasted chicken which was so good that it was all gone before I got a chance to sample it. The skin was crispy and the meat was tender. Just as it should be. And the others had slow cooked bacon which arrived looking like a plate of sick but tasted great! There's an art to presenting slow cooked food; it normally involves covering it in pastry or mashed potato!

A couple of us had bread and butter pudding with quince jam which was brilliant. John said it was the best he had eaten in 2007. Impressive stuff. 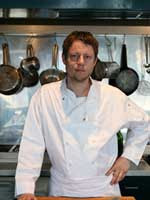 Toward the end of our meal Oliver "The Urban Chef" Rowe strolled into the kitchen the check how things were going. I suspect if he had cooked the duck we'd have been raving about the cooking. It was great to see him actually in his own restaurant. He looked very happy with things and at ease with Konstam.

Our minor gripes were that the service was casual and a bit too slow. And more imporantly the food was good but not as good as it could have been.

But overall we had a super time. I'm planning to return for dinner with Cowie when I hope the food will be stepped up a gear.
Posted by Browners at 11:23